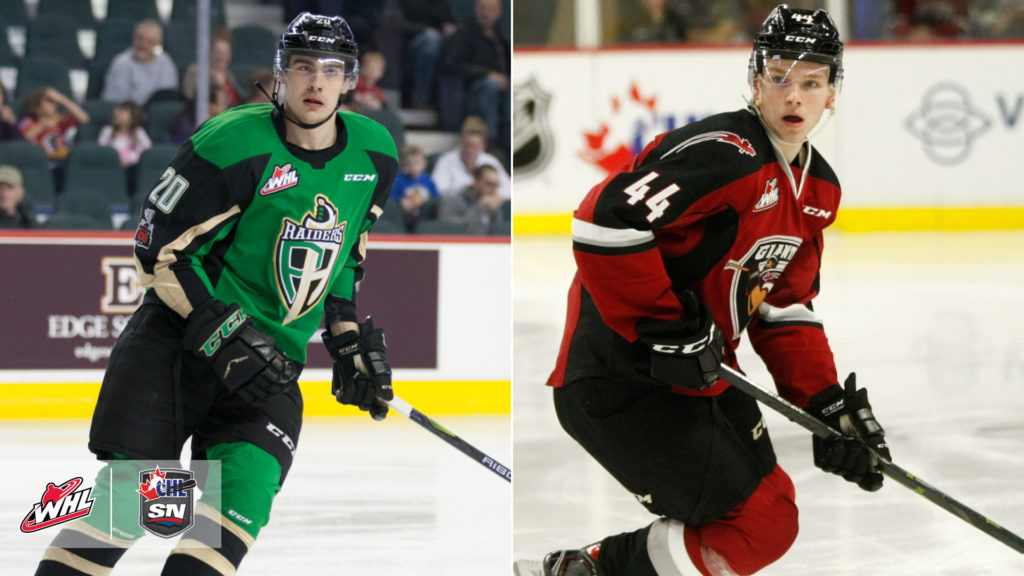 Canadian Hockey League fans from coast-to-coast are in for a treat Thursday as a pair of division leaders and two of the top four teams in the Western Hockey League meet on Sportsnet.

The Prince Albert Raiders will roll into British Columbia’s Lower Mainland looking to pick up on what has been a successful biennial trip through the B.C. Division, though they’ll have to take on the division’s top team in the Vancouver Giants.

Tuesday, they became the first team in the Canadian Hockey League to reach 40 wins by taking down the Victoria Royals, extending their undefeated-in-regulation streak to six games (5-0-0-1). Following their 22-game streak where they suffered just one shootout loss (21-0-0-1), the Raiders have yet to relent on their claim as the league’s top team. As such, they enter play Thursday just a few points away from becoming the first team to secure their place in the 2018 Western Hockey League Playoffs.

The Raiders have been guided by the breakout campaign of 2019 National Hockey League Draft prospect Brett Leason and his unprecedented 73-point (31G-42A) season that has taken the league by storm, placing him in fourth place for league scoring entering Thursday. His 30-game point streak was one of the most-discussed stories in the first half of the 2018-19 WHL Regular Season and his recent contributions to Team Orr at the 2019 Sherwin-Williams CHL/NHL Top Prospects Game have helped solidify the decision of NHL Central Scouting to rank the Calgary, Alta. product 17th among North American skaters in their midterm rankings.

He hasn’t been the only strong player for the Raiders either, who have enjoyed an all-world season from goaltender Ian Scott (Toronto Maple Leafs). Another Calgary, Alta. product, Scott leads the WHL in goals-against-average, save percentage, while sitting tied for first in shutouts and in sole possession of second place in wins, one behind the league leader.

Mix in the likes of Noah Gregor (San Jose Sharks), Parker Kelly (Ottawa Senators), and Cole Fonstad (Montreal Canadiens), each of whom has 10 points in their last nine games played, and you have the makings of a team that are determined to capture their first WHL Championship since their first and only win back in 1985.

The Giants will respond with a talented 2019 NHL Draft prospect of their own in Bowen Byram, the top-ranked defenceman in North America according to the NHL’s Central Scouting service. The leading goal scorer among all CHL defencemen, Byram is tied for the team lead in scoring for the 2019 calendar year. Like he needed to do more to impress, a stretch of points in eight of his last nine games, including a franchise record five-point game back on January 12, has him high on the radars of NHL scouts. He impressed further at the Top Prospects Game in Red Deer, Alta., just another addition to a long hockey resume that has earned glowing reviews regardless of the jersey he’s wearing.

As the only draft-eligible defenceman in the Top 10 of WHL defensive scoring, he’s attracted attention for how well he plays on both sides of the puck and he won’t have to wait long to hear his name called at the 2019 NHL Draft.

Just like Leason with Prince Albert, Byram isn’t the only contributor to his team’s success either. The goaltending duo of David Tendeck (Arizona Coyotes) and another 2019 NHL Draft prospect in Trent Miner have been among the best in the league. Davis Koch has been a strong overage talent for the Giants, matching Byram’s 15 points in the 2019 calendar year.

Likewise, a team-leading 18 goals from Milos Roman (Calgary Flames) have also provided more scoring threats for a Vancouver team that appears poised to capture their first B.C. Division title since 2010 when they ended a run of five-straight division crowns.

In a battle of high-octane offences, the difference could most certainly come down to special teams, though there’s not much separation between the two clubs either. With both teams tied for eighth in the league’s power-play rankings, while the Raiders and Giants rank first and second in penalty kill respectively. The difference of course comes in the short-handed goal for with the Raiders owning that in a 18-3 advantage.

Catch all the talent in action from coast-to-coast on Sportsnet live from the Langley Events Centre as the Prince Albert Raiders meet the Vancouver Giants.

It's game day! It's our last game against the BC Division as we take on the Vancouver Giants!

📲Get the @LeavittMachine Preview on the Raiders App, or online here: https://t.co/P6KESGKdGv