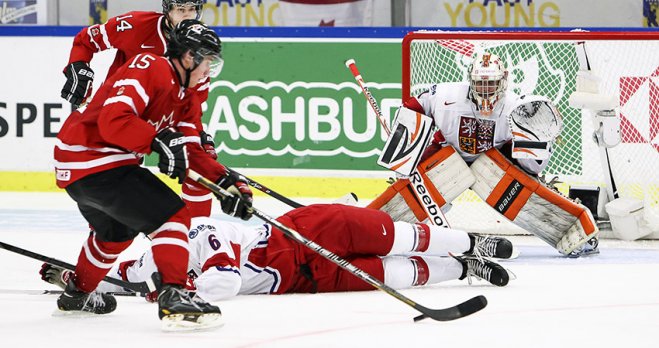 (Courtesy Canadian Press) Malmo, SWE – Dominik Simon got the deciding goal in a shootout as the Czech Republic shocked Canada with a 5-4 victory on Saturday at the world junior championship.

Jonathan Drouin scored for Canada on the first attempt of the shootout, but Nic Petan and Connor McDavid failed to beat Marek Langhammer while David Pastrnak and Simon scored on Jake Paterson.

The crowd of 3,011 at the Isstadion saw the Czechs take four one-goal leads only to have Canada tie it each time. Most of the action was in the third frame, when five goals were scored.

Charles Hudon forced overtime with a 13:01 of the third period, while Sam Reinhart, with his second in as many games, Drouin and Aaron Ekblad also scored in regulation time for Canada.

Canada gave up the first goal in all three pre-tournament games as well as their opening win over Germany. They did it again when Kampf got the Czechs on the board 7:10 into the game.

The Czechs had heavy pressure in Canada’s end, forcing a turnover from Ekblad, and Kampf put a soft shot along the ice that slid past Paterson.

Canada was on the power play when its youngest line tied it at 15:50 on a tic-tac-toe play from McDavid to Bo Horvat to Reinhart in the slot for a shot that Langhammer had no chance.

But rather than gain legs from the goal, Canada had a messy second period in which it was outshot 11-5 and the Czechs got the go-head just after a power play ended. Plutnar, who scored their lone goal in a 5-1 loss to the U.S. on Thursday, wired a high shot from the point that beat Paterson at 17:16.

There was a skirmish at the end of the period after McDavid shot into the Czech net after time expired and it put Canada on the power play to start the third. Drouin drilled in a goal off a feed from Reinhart only 24 seconds in.

A Canadian power play was nullified after four seconds when McDavid took a hooking penalty. With the faceoff in Canada’s end, centre Tomecek pushed the puck forward and scored on a spin-around shot at 4:05.

Ekblad tied it short handed after Canada took a too many men on the ice penalty as Curtis Lazar went hard to the net and the 17-year-old rearguard followed in to score into an open net at 11:09.

Vrana, another 17-year-old, scored from the left circle after a faceoff win in Canada’s end at 12:45, but only 16 seconds later, Hudon collected a puck that was knocked off Anthony Mantha’s stick and threaded a shot in from the high slot.