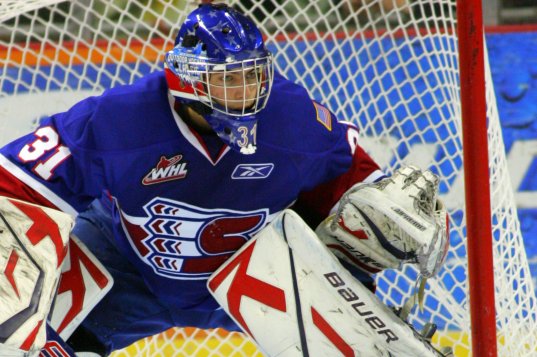 The Spokane Chiefs have announced that Ryan Cyr has been hired as the organization’s Goaltending Coach, replacing Denis Sproxton who is stepping aside due to family commitments. Cyr most recently had served as the Regina Pats Goaltending Consultant for the past four seasons.

Cyr is also currently serving as President of GDI Praries INC., an organization designed to develop high performance goaltenders at all levels of play.

“The run the Chiefs have had has been a very successful one over the past five years,” Cyr said.  “I’m excited get the chance to work with such respected people in hockey like (General Manager) Tim Speltz and (Head Coach) Don Nachbaur.”

As a player, Cyr appeared in 155 games over five seasons (2000-2005) in the WHL split amongst the Seattle Thunderbirds, Lethbridge Hurricanes and Saskatoon Blades.  As a 20-year-old with Saskatoon in 2004-05 he finished sixth in the league with 28 wins.  He played professionally for two seasons after his junior career was over.

“I believe that at this level a goaltender is there for a reason,” Cyr said when describing his philosophy.  “They don’t need to be restructured, just tweaked to best fit their strengths.  I think that being a mentor is important, being someone who you can lean on during the ups and downs of the long WHL season.”

Sproxton spent 10 seasons with the Chiefs that included the 2008 Memorial Cup Championship.  In his tenure he coached a pair of Western Conference Goaltenders of the Year; Barry Brust (2002) and James Reid (2011).  Sproxton was instrumental in the development of all Chiefs’ goaltenders, including that of Dustin Tokarski, the MVP of the Memorial Cup and winning goaltender in the 2009 World Junior Tournament.  The Red Deer native will remain involved with the organization in a scouting capacity.

Cyr’s first duty as Goaltending Coach will be the Chiefs’ Annual Fall Camp which is scheduled to begin with ice sessions on Thursday, August 25th in the Spokane Arena.