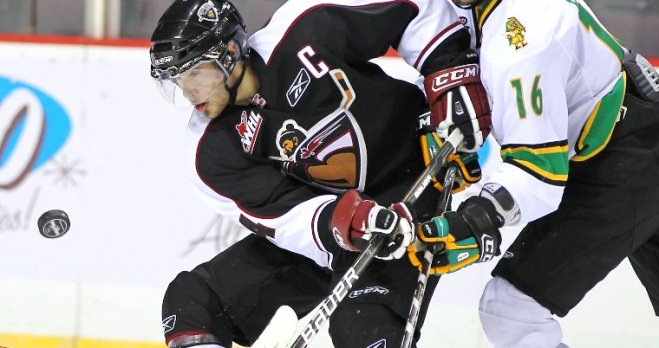 CALGARY, AB. – The Western Hockey League announced today that forward Craig Cunningham, of the Vancouver Giants, has been named the HUSKY WHL Player of the Month for September/October.

The 20 year-old forward has had an incredible to start to the season recording 36 points in 18 games through September/October to lead all WHL scorers.  Cunningham found the net seven times and assisted on 29 others all while maintaining a plus minus rating of +14.  He went on a 10 game point streak through October and collected points in 15 of his 18 games played, including 13 multi-point games.  Cunningham also leads all WHL scorers in the points per game category averaging 2.00 Pt/G.

Cunningham’s consistent play has helped the Vancouver Giants maintain top spot in the WHL B.C. Division with a 10-6-1-1 record for 22 points.  His efforts have also earned him a Three Star selection seven times, with five being 1st Stars.

Cunningham, from Trail, BC, has spent his entire WHL career with the Vancouver Giants.  The 2010 4th round pick of the Boston Bruins has appeared in 277 WHL games, scoring 213 points (83 goals, 130 assists).  Cunningham has also skated in 58 WHL playoff games with the Giants acquiring 42 points.

His accomplishments make Craig Cunningham a deserving choice as the HUSKY WHL Player of the Month for September/October.