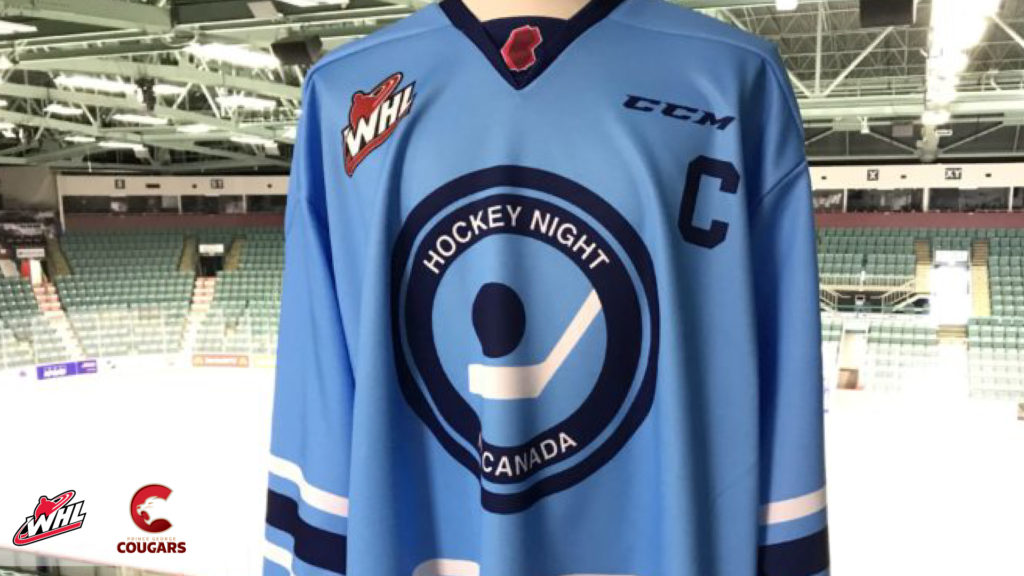 On Friday, the Prince George Cougars are helping raise awareness for organ donation in Canada with the WHL Suits Up to Promote Organ Donation Presented by RE/MAX campaign.

This year, the Cougars will face off against the Tri-City Americans and they will be wearing baby blue Hockey Night in Canada themed jerseys. The crest of the jersey features the retro Hockey Night in Canada logo, as well as the new Kidney Foundation logo. The game worn jerseys will be auctioned off online with 100 percent of the proceeds from the auction going to the B.C. / Yukon branch of The Kidney Foundation of Canada.

Fans can bid on the game worn Hockey Night in Canada jerseys at www.32auctions.com. Bidding closes at on February 17th (7:00 p.m. PT)

Those in attendance will also have the chance to win a commemorative bobblehead celebrating the history of Hockey Night in Canada.

New this year, WHL member Clubs will also pay tribute to the Logan Boulet Effect. A member of the Saskatchewan Junior Hockey League’s Humboldt Broncos, Boulet passed in the tragic bus crash that claimed the lives of 16 people on April 6, 2018. Boulet – who was only 21 years old at the time – earned widespread, posthumous commendation for his decision to have previously signed his organ donation card, ensuring a selfless act that provided the gift of life to others and sparked a national movement for organ donation registration at the same time.

The Cougars will sport helmet decals in support of “Green Shirt Day Presented by VistaPrint Corporate Solutions in Partnership with Global News and Canada’s Organ and Tissue Donation Community.” On April 7, fans are encouraged to wear green in memory of the Humboldt Broncos bus tragedy and in honour of the Logan Boulet Effect.

“Every day, the Kidney foundation works to bring organ donation and transplantation out of the shadows and our partnership with the WHL and RE/MAX has allowed us to engage with thousands of Canadians,” said Cyril Muise, National Director of the Kidney Foundation. “As a transplant recipient, I am honoured to be part of these special games which are about saving lives.”

Through the first two years of the event, the WHL and its teams have raised more than $460,000 for the Kidney Foundation.

Join the Northern Uprising and take advantage of the best sports entertainment option in Northern B.C Single game tickets start at just $13 per person, per game. Get your tickets at the TicketsNorth box office, or visit www.ticketsnorth.ca