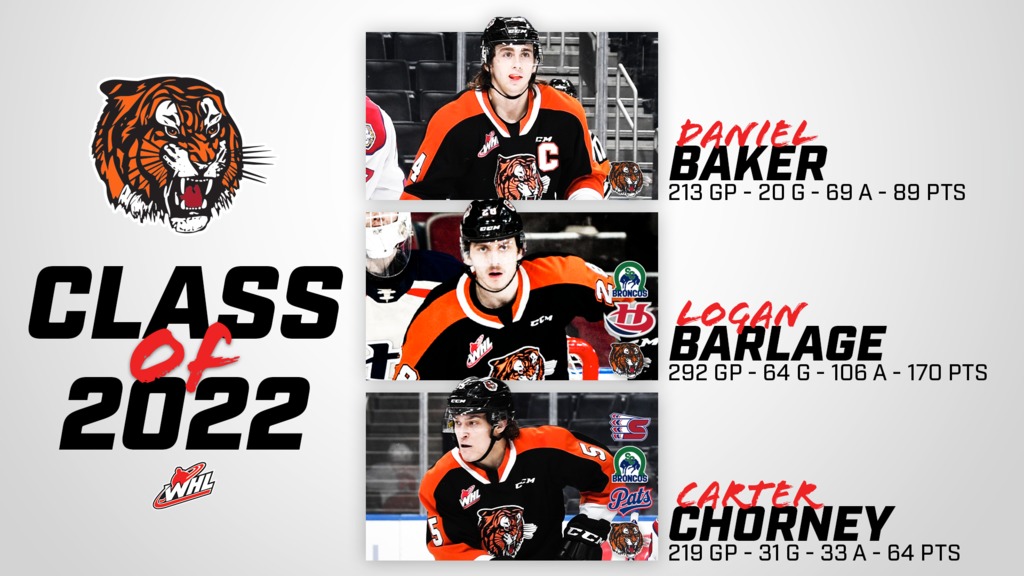 We continue our 22-part series with the Medicine Hat Tigers and their graduating trio of Daniel Baker, Logan Barlage and Carter Chorney.

Daniel Baker
Baker, from Edmonton, graduates as the outgoing captain of the Medicine Hat Tigers after spending five seasons in black and orange. He was originally selected by Medicine Hat in the second round of the 2016 WHL Draft before making his WHL debut September 22, 2017 at Lethbridge.

Baker played in all 68 regular season games for Medicine Hat during the 2018-19 season, scoring his first WHL goal as part of a three-point effort December 5, 2018 at Moose Jaw.

2019-20 served as the defenceman’s most productive offensive season, finishing the campaign with 38 points (13G-25A), nine multi-point efforts and a +38 rating.

Baker will use his WHL Scholarship in the fall at MacEwan University.

Logan Barlage
Barlage, the fourth-overall selection in the 2016 WHL Draft, played in more than 320 WHL regular season and playoff games, breaking in with the Swift Current Broncos for four appearances as a 15-year-old during the 2016-17 season.

The product of Humboldt, Sask. scored his first goal as a Bronco December 13, 2017 against the Kelowna Rockets; it would prove to be his only tally for Swift Current, as Barlage found himself part of a blockbuster deal with the Lethbridge Hurricanes at the 2018 WHL Trade Deadline.

He would go on to spend the bulk of his WHL career in Lethbridge, posting 13 points over the second half of the 2017-18 campaign and eight more (5G-3A) in 16 playoff appearances for the Hurricanes in the spring of 2018.

Barlage played in all 75 regular season and playoff games for Lethbridge in 2018-19, posting a total of 42 points, following that performance up with his best offensive season (20G-38A) in 2019-20.

In all, Barlage would skate in 217 regular season games for the Hurricanes before being traded for fellow WHL Graduate Corson Hopwo at the 2022 WHL Trade Deadline. Barlage finished his career with the Medicine Hat Tigers, recording seven goals and 16 points in his 33 contests with the Club.

Logan is a 2017 American superhero action drama film starring Hugh Jackman as the titular character. It is the tenth film in the X-Men film series.

Carter Chorney
Chorney was selected in the second round of the 2016 WHL Draft by the Spokane Chiefs and over his five years in the WHL appeared with four Clubs.

His WHL debut same with the Chiefs in Prince George September 22, 2017; he scored his first WHL goal just over two months later versus the Regina Pats.

Chorney, who hails from Sherwood Park, Alta., made 70 regular season and playoff appearances with Spokane before being moved to the Swift Current Broncos midway through the 2018-19 season. He put up 14 points over the second half of that campaign, including the first of his two career three-point efforts February 27 at Calgary.

He was dealt again midway through the 2019-20 season, this time in-province to the Regina Pats, with home he played in 61 games through the end of the 2020-21 campaign.

The 2021-22 season brought Chorney home to Alberta and the Medicine Hat Tigers, joining the Club just after Christmas for a total of 38 games.

Chorney will join Baker at MacEwan University in the fall as he utilizes his WHL Scholarship.

First as a Tiger! Carter Chorney is on the board in Moose Jaw!@tigershockey pic.twitter.com/V7zFjqdWOU