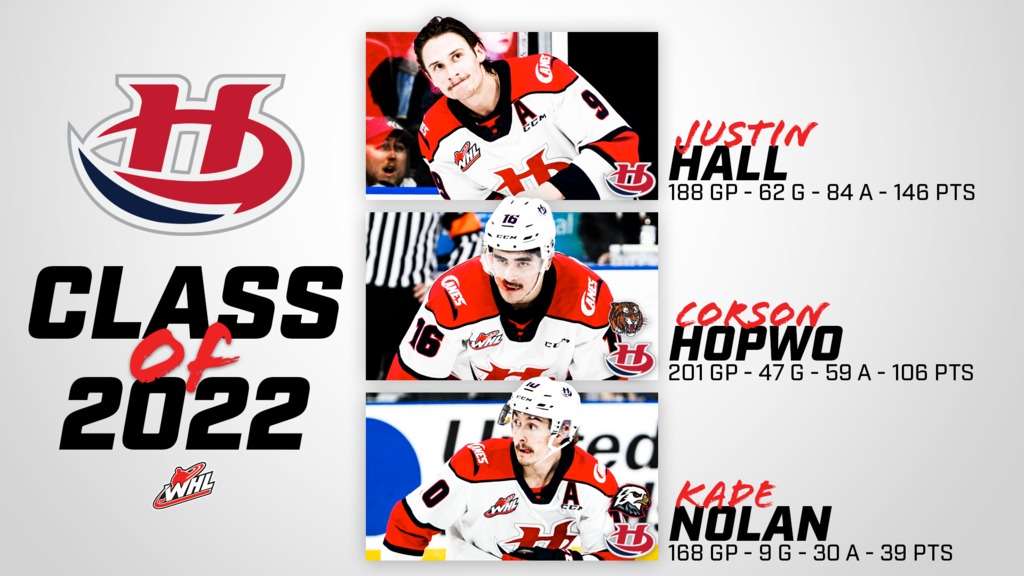 We continue our 22-part series with the Lethbridge Hurricanes and their graduating trio of Justin Hall, Corson Hopwo and Kade Nolan.

Justin Hall
Edmonton’s Justin Hall scored 63 regular season and playoff goals over his four years with the Lethbridge Hurricanes, 34 of which came during the 2021-22 season.

Originally selected by Lethbridge in the seventh round of the 2016 WHL Draft, Hall cracked the Hurricanes roster for the 2018-19 season, scoring his first goal November 30, 2018 in a two-point effort versus Swift Current.

Hall’s points-per-game average leapt year over year into the 2020-21 campaign, in which he scored 12 times and tallied 27 points over 24 games. That total included the first of his four career games with five or more points, April 12, 2021 against the Red Deer Rebels.

His final season in the WHL featured a quartet of hat-tricks, including a five-goal, six-point effort February 26, 2022 against the Medicine Hat Tigers. Hall finished the season with a team-leading 74 points and eight game-winning markers, earning a spot on the Central Division Second All-Star Team in the process.

Along with twin brother Adam, he attended Edmonton Oilers Development Camp in July.

Corson Hopwo
Hopwo, from Duncan, B.C., was selected two picks before Hall in the 2016 WHL Draft, going in the seventh round to the Medicine Hat Tigers.

The left-shooting winger spent the bulk of his WHL career in the Gas City, debuting for the Tigers at Victoria February 2, 2018. His first WHL goal opened the scoring for Medicine Hat in a 5-4 home-ice victory versus the Calgary Hitmen November 4, 2018.

He’d play 25 more games as a Tiger in 2021-22 before moving to the Lethbridge Hurricanes at the 2022 WHL Trade Deadline. In 31 games with Lethbridge, Hopwo collected 10 points.

Hopwo will take advantage of his WHL Scholarship in the fall at Acadia University.

Corson Hopwo hops on a juicy rebound to give the @WHLHurricanes the first lead of the game! pic.twitter.com/yshguZ0VYp

Kade Nolan
Selected in the fourth round of the 2016 WHL Draft by the Portland Winterhawks, Nolan spent the bulk of his four WHL seasons south of the 49th parallel.

The defenceman, who hails from Rouleau, Sask., made his WHL debut for Portland September 23, 2018 at Everett, appearing in 36 games during the 2018-19 campaign.

Nolan’s first WHL goal came the following season in his home province, scoring for the Winterhawks in an 8-2 triumph over the Swift Current Broncos.

Nolan would score five of his nine career WHL goals as a Winterhawk including three in the shortened 2020-21 campaign, but found himself on the move to Lethbridge early in the 2021-22 season.

He went on to appear in 54 regular season and playoff games with the Hurricanes, collecting 14 points.