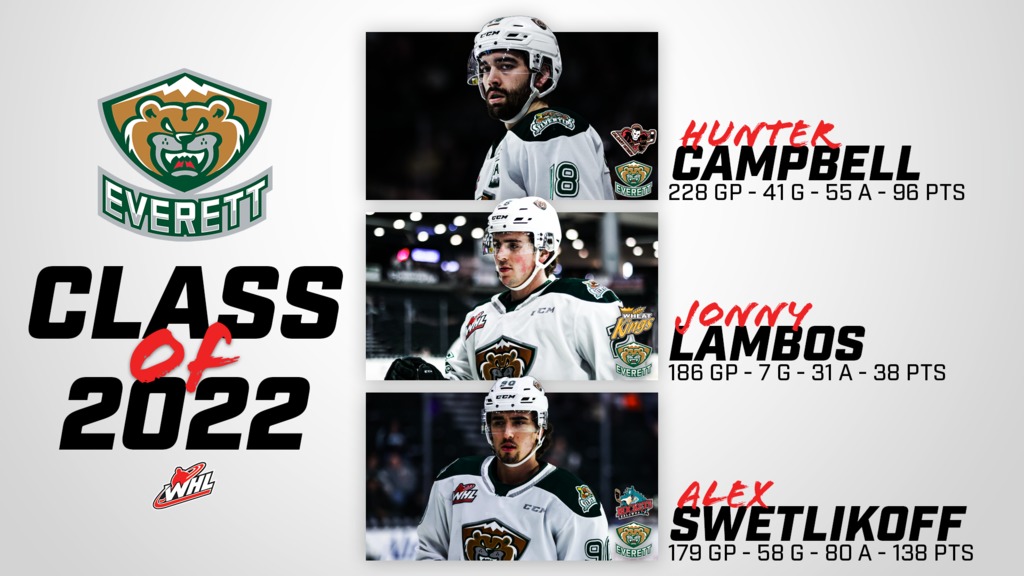 We continue our 22-part series with the Everett Silvertips and their graduating trio of Hunter Campbell, Jonny Lambos and Alex Swetlikoff.

Hunter Campbell
Everett, Washington’s Hunter Campbell registered exactly 100 regular season and playoff points over his WHL career, which began with the Calgary Hitmen after he was selected in the third round of the 2016 WHL Draft.

The 6-foot-2, 194-pound forward broke into the league with the Hitmen in 2017-18, scoring his first career WHL goal October 11, 2017 at Kamloops and his second two nights later in Kelowna.

Campbell finished his rookie campaign with 11 points, chipping in with 13 more for Calgary in 46 outings during the 2018-19 season.

He returned home to Everett at the 2020 WHL Trade Deadline, scoring his first goal as a Silvertip nine days after being acquired in a home contest versus the Seattle Thunderbirds.

From there, his production took off, as Campbell scored nine times in 23 games during the 2020-21 season. He finished his WHL career in 2021-22 as one of six Everett skaters to crack the 20-goal mark, completing this past season with 47 points (21G-26A).

No matter what comes next, you're always Everett's own @huntercamp05.

Jonny Lambos
Like fellow Silvertips graduates Campbell and Swetlikoff, Jonny Lambos was a third-round selection in the 2016 WHL Draft, taken 49th-overall by the Victoria Royals.

Like Swetlikoff, Lambos did not appear in a WHL game for the Club that selected him in the WHL Draft, as he was dealt in a blockbuster to the Brandon Wheat Kings in a trade involving St. Louis Blues draftee Tanner Kaspick in January of 2018.

Lambos, who calls Winnipeg home, spent three full seasons in his home province with the Wheat Kings, making his WHL debut at Moose Jaw September 22, 2018 and recording his first WHL point the following month against the Spokane Chiefs.

He scored a career-high five goals for Brandon during the 2019-20 season, including his first career WHL tally which, ironically, was scored in Everett.

The Silvertips added Lambos via trade prior to the start of the 2021-22 season, and he proved a reliable presence on Everett’s blue line, recording 19 points (2G-17A) over 60 regular season games.

Overall, Lambos made 192 WHL regular season and playoff appearances for the Wheat Kings and Silvertips, totalling 39 points (8G-31A) in the process.

“The fans, we have a great group of guys here, great coaches…it’s just a first-class organization that I’m proud to have been a part of.”

-Jonny Lambos, reflecting on his 20-year-old season in Everett

Alex Swetlikoff
Originally selected by the Seattle Thunderbirds in the third round of the 2016 WHL Draft (two picks after Silvertips teammate Hunter Campbell), Alex Swetlikoff began his four-year WHL career with his hometown Kelowna Rockets midway through the 2018-19 season.

His first two WHL goals were both power-play markers, coming in a three-point effort February 6, 2019 against the Spokane Chiefs. In 32 games, he accumulated 14 points.

Swetlikoff spent two more seasons in Kelowna, hitting the point-per-game mark in 2020-21, racking up 15 points in as many games while posting a 57.4 winning percentage in the face-off circle.

The Everett Silvertips came calling in late August of 2021, acquiring Swetlikoff in a deal that involved another Kelowna, B.C. product, forward Max Graham.

In Everett, Swetlikoff took 1,583 draws over the course of the 2021-22 season, second-most among WHL players, all while appearing in all 68 games for the Silvertips.

How to be efficient on the power play and influence people: a short video essay by Olen Zellweger and Alex Swetlikoff. #CHLTVGOTW@WHLsilvertips | @AnaheimDucks | @KubotaCanadaLtd pic.twitter.com/7F4TibUq1K