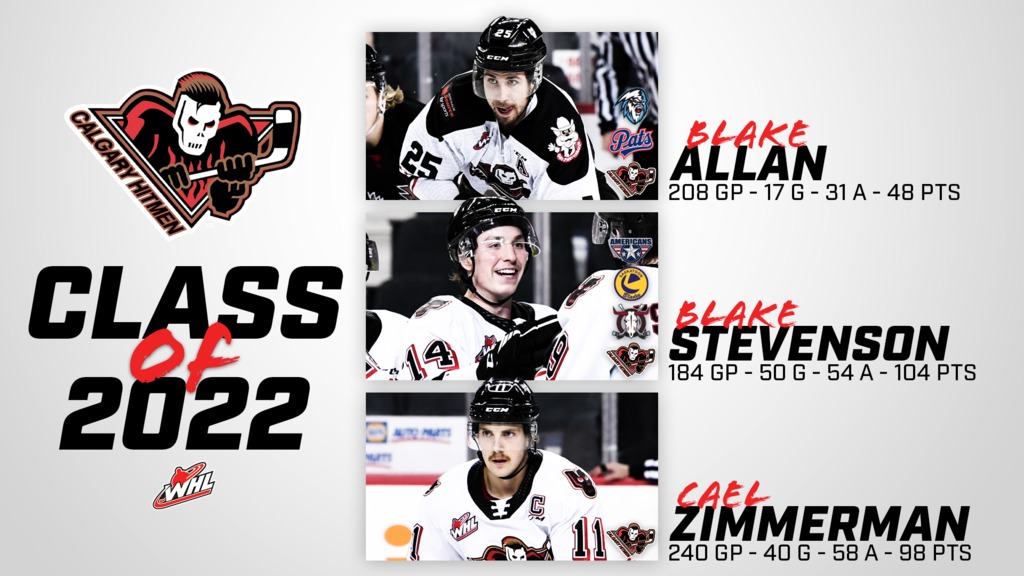 We continue our 22-part series with the Calgary Hitmen and their graduating trio of Blake Allan, Blake Stevenson and Cael Zimmerman.

Blake Allan
Originally selected by the Kootenay ICE in the third round of the 2016 WHL Draft, Allan appeared in 208 WHL regulars season contests with three different Clubs.

The product of Davidson, Sask. scored in his second WHL game March 11, 2018 at Edmonton, breaking into the league on a full-time basis during the 2018-19 season.

Allan was dealt to the Regina Pats in a mid-season trade after 35 appearances with the ICE, then landed in Calgary early in the 2019-20 campaign, making his second appearance with the Hitmen at Mosaic Stadium in Regina in the 2019 WHL Prairie Classic against his former Club.

Thank you for setting an example of what it means to be a Calgary Hitmen. pic.twitter.com/ee3DRuVR8h

Blake Stevenson
Stevenson finished his WHL career with his hometown Calgary Hitmen, but his five seasons in the league began in the U.S. Division with the Tri-City Americans, who selected the forward in the fourth round of the 2016 WHL Draft.

Stevenson made his WHL debut on his 17th birthday, January 12, 2018 versus the Portland Winterhawks, and spent the next two full seasons with Tri-City, where he compiled a total of 18 goals and 34 points.

His first WHL goal came on home ice October 12, 2018 against the Kelowna Rockets, his first multi-goal game also took place at the Toyota Center when he scored both Americans goals in an overtime setback versus Winnipeg.

Stevenson spent the 2020-21 campaign with the Saskatoon Blades, compiling 14 points in 24 games, including a pair of game-winning markers.

The start of the 2021-22 season brought Stevenson back to Alberta, where he totalled 32 points in 34 games with the Red Deer Rebels before making his way south to Calgary just prior to the WHL Trade Deadline.

Stevenson finished this past year with 25 goals and 56 points, scoring three or more points on six occasions. He concludes his WHL career with 104 points (50G-54A) over 184 regular season outings.

What you can do, I can do better.

Cael Zimmerman
Hailing from Englefeld, Sask., Cael Zimmerman spent his entire WHL career with the Calgary Hitmen after being selected in the second round of the 2016 WHL Draft. The left-shot centreman broke into the league during the 2017-18 season, registering 18 points from 66 appearances.

His second WHL campaign included a trip to the WHL Playoffs, in which Zimmerman amassed six points in 11 games as Calgary reached the Second Round.

He completed his tenure in Calgary as Hitmen captain, and over the course of his time in the WHL he totalled 104 regular season and playoff points from 251 games played.