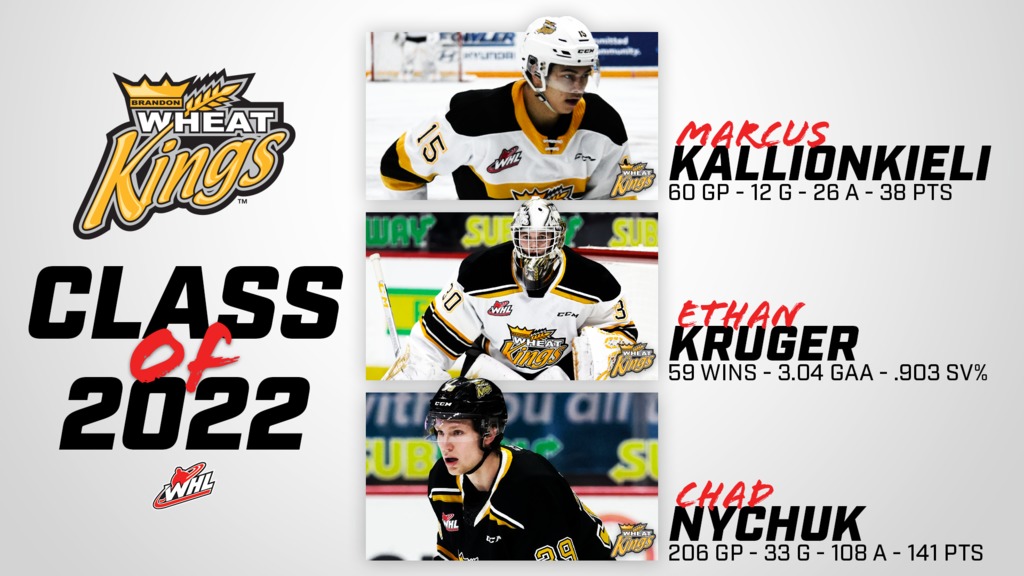 We begin our 22-part series with the Brandon Wheat Kings and their graduating trio of Marcus Kallionkieli, Ethan Kruger and Chad Nychuk.

Marcus Kallionkieli
The Finnish forward spent two seasons with the Wheat Kings, joining the Club in December of 2019 after being selected in the first round of the 2019 CHL Import Draft.

Kallionkieli wasted no time finding the scoresheet, scoring once, and adding two assists in his second WHL contest December 13, 2019 versus Moose Jaw. The product of Helsinki finished the 2019-20 season with 11 points from 24 games.

Kallionkieli was selected by the Vegas Golden Knights in the fifth round of the 2019 NHL Draft; he signed an entry-level contract prior to arriving in Brandon.

Kallionkieli is slated to join the Henderson Silver Knights of the American Hockey League for the 2022-23 campaign.

Originally selected by Brandon in the fifth round of the 2016 WHL Draft, Kruger made his Wheat Kings debut October 13, 2018 versus Swift Current, turning aside 30 shots in a shootout setback.

Kruger earned his first career victory later that month, stopping 26 shots in his away debut as Brandon collected a 5-4 win at Prince George October 30, 2018.

His first career WHL shutout came on home ice in November of 2019, as Kruger stopped all 24 shots he faced in a 5-0 victory over the Broncos.

Kruger’s best numbers came during the 2020-21 season. In 16 appearances, he registered a 13-2-1-0 record, 2.30 goals-against average and .915 save percentage, helping Brandon capture the East Division title.

He appeared in a career-high 51 games this past season, winning a personal best 27 games as the Wheat Kings made their return to the WHL Playoffs. Kruger posted a 2.62 GAA and .916 SV% in Brandon’s six post-season outings this spring.

Chad Nychuk
Nicknamed the “Rossburn Rifle,” Chad Nychuk earned a reputation as an offensive specialist during his 212 regular season and playoff games with the Brandon Wheat Kings.

Nychuk earned his first point in the WHL October 16, 2018 versus the Spokane Chiefs, scoring his first career WHL goal four days later in a home contest versus the Calgary Hitmen.

He upped his point production from 13 to 39 during the 2019-20 season, scoring seven times while also enjoying a six-game point streak during the month of January. Nychuk added 18 points during the abbreviated 2020-21 campaign as Brandon captured the East Division crown.

Nychuk saved his best for last, though, scoring 21 times and totalling 71 points for the Wheat Kings this past season. Eight of his goals stood as game-winners, while his 21 total tallies stood at the top of the pack among WHL defencemen. Nychuk became just the seventh blueliner to reach the 20-goal mark in the past five WHL campaigns; for his efforts he was named to the East Division Second All-Star Team.

He’ll make the transition to professional hockey this fall after signing a contract with the Abbotsford Canucks of the AHL.

For more details, check out the link below ⬇️https://t.co/y08waghCrL pic.twitter.com/PK8O1BEiRK