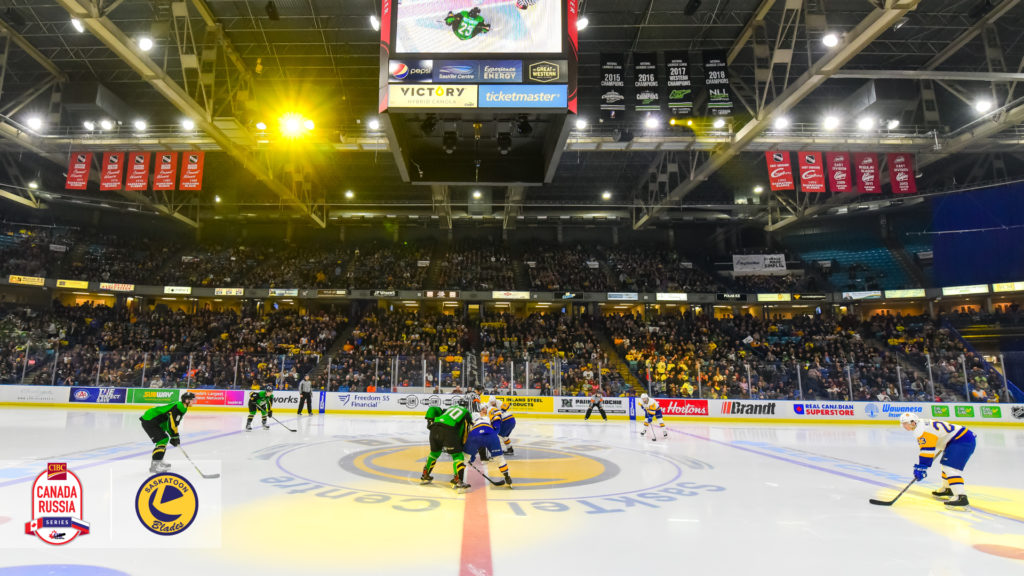 The Saskatoon Blades will take a leading role in the national spotlight on Wednesday, November 13 (7:30 p.m. CT) when the CIBC Canada Russia Series returns to Saskatoon for the third time in the event’s history.

As players and coaches have come and gone throughout the organization’s history, the pride in the organization remains as strong as ever. In the present, they’ve found the right chemistry to have success.

“The city of Saskatoon is such a great hockey market,” said head coach Mitch Love, now in his second season behind the Blades’ bench. “It’s been around for a long time. The fanbase and the community is very supportive and passionate about the Blades hockey team.”

When the event took place in 2005 and 2014, it caught up with the Blades in two separate circumstances. In 2005, the Blades were in the midst of a 41-win season, competing against the best in the league that year. In 2014, the Blades encountered a tough stretch that saw them miss the playoffs.

As Team WHL, Hockey Canada’s brain trust, and top Russian players get set to arrive in two weeks, they’ll encounter a Blades’ team that resembles more of the former situation. Last year, the Blades made a 24-point improvement in arguably the league’s most competitive division, going from a sixth-place finish with 74 points in 2017-18 to 98 points and a second-place finish in 2018-19. They also went from 15th in the league’s overall standings to fourth.

“It was a long time that there hadn’t been any playoff hockey here for the city and the organization,” Love said. “Our approach last year as a staff and a team was to just take it one day at a time and how could we get better.

“What we’re trying to do is create a new culture of competitiveness for the Blades.”

It’s with the mindset of the latter, knowing the tough times they went through, that the Blades’ have been able to rediscover their success and make a commitment to the future.

“I think that was huge, not only for our fans, but for our organization,” said goaltender Nolan Maier of last year’s 45-win campaign. “Being able to finally get to the playoffs and just see the support from our city and our fans.

“It’s cool to see the transformation from when I was 16 to last year being in the playoffs.”

Maier has played a large part in that success himself, bursting onto the scene in the 2017-18 WHL Regular Season, winning 23 games as a rookie, including a run of 10 consecutive victories. He followed it up with a 36-win season last year to place him among the WHL’s leaders.

He was also the team’s backbone in their return to the WHL Playoffs, posting a 1.94 goals-against average and a 0.916 save percentage in a four-game sweep of the Moose Jaw Warriors before they fell in a hotly contested six-game series against the Prince Albert Raiders.

Love and Maier may represent the blue and gold on a nightly basis, but they’ve also taken a liking to the red and white. In addition to both representing Team WHL at this year’s event, they’ve represented Hockey Canada at the World Under-17 Hockey Challenge in different years and came together to win gold at the 2018 Hlinka Gretzky Cup.

This year, Love will take on the role of assistant coach with Canada at the IIHF World Junior Championship. With the CIBC Canada Russia Series serving as an audition from players for the World Juniors, he was anticipating a high level of play from both sides.

“To our fans that are just hockey fans in general, this is really good hockey that they’re going to get a chance to witness for one night in this building.”

For Maier, his path has a solid foundation with WHL and international experience. It’s also another chance to prove to Hockey Canada he can take his game to another level. From his experience at three separate international tournaments, he knows what certain Russian players bring to the table. Still, Maier was simply focused on his performance, regardless of what game he starts at the event.

“It’s going to sound like a cliché, but I’m just going to control what I can control,” Maier said. “That’s been the biggest thing for me going through my experience in the WHL.”

The upcoming games in Saskatoon and Prince Albert will give Hockey Canada’s decision makers more information to go off as they whittle down their list. In Maier’s mind, it’s also recognition for a dedicated fan base in his home market.

“You can really tell they love the city,” Maier said. “Even if it’s on a Wednesday night, they’re going to be coming out, supporting us. It’s a great hockey town.”