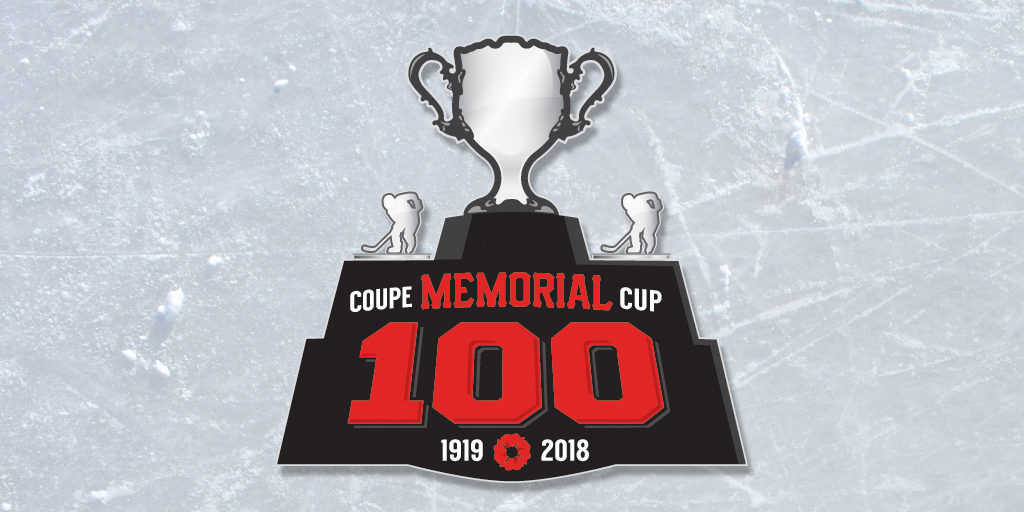 Toronto, ON – The Canadian Hockey League today unveiled a celebration logo designed to honour the 100th presentation of the Memorial Cup.

The logo was introduced prior to three final bid presentations for the 2018 Mastercard Memorial Cup heard today in downtown Toronto by a national Site Selection Committee of sport industry leaders from across Canada.

The Hamilton Bulldogs, Regina Pats, and Oshawa Generals are all vying for the opportunity to host the 100th edition of the league’s prestigious national championship to be held May 17-27, 2018, featuring a host CHL team along with the champions of the OHL, WHL, and QMJHL competing in the traditional round-robin tournament format.

“Today was a very successful day with three fine presentations,” said Gord Kirke, 2018 Mastercard Memorial Cup Site Selection Committee Chairman. “Each of the presentations were professional and thorough emphasizing competitive hockey clubs and an appreciation for Canadian Armed Forces and the services they provide our country.  The Site Selection Committee has a challenging decision ahead, which is a good thing, because if today’s presentations are any indication the 100th presentation of the Memorial Cup will be a tremendous celebration.”

The Memorial Cup has a rich tradition that has shaped the way junior hockey is played in North America. The trophy was originally known as the OHA Memorial Cup and was donated by the Ontario Hockey Association in March, 1919, in remembrance of the many soldiers who paid the supreme sacrifice for Canada in the First World War.  In 2010 the Memorial Cup was rededicated to the memory of all fallen Canadian Military Personnel killed in combat serving our country.

The 99th edition of the Mastercard Memorial Cup will be hosted by the Windsor Spitfires May 18-28, 2017.