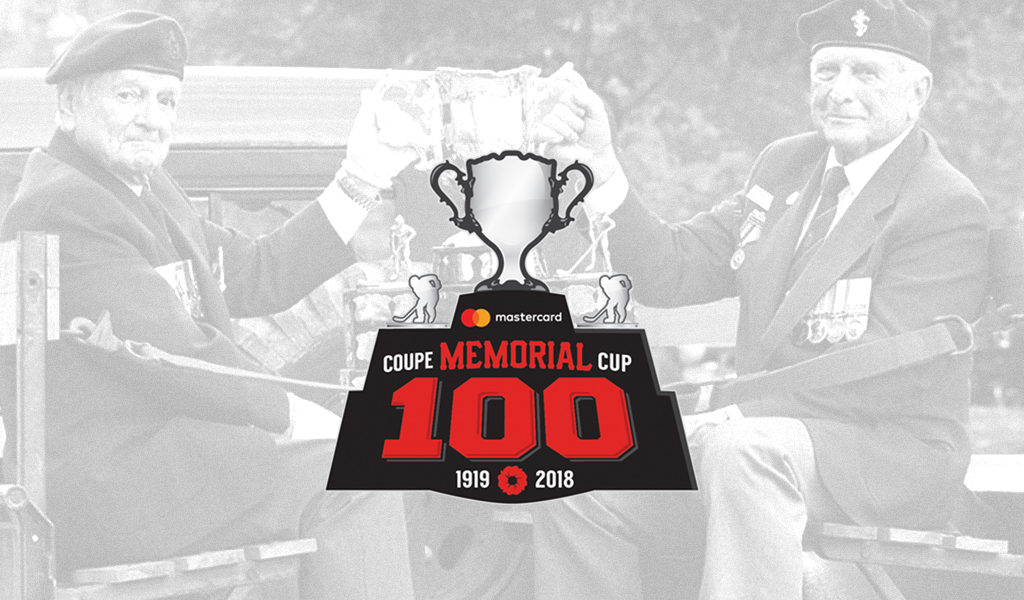 Toronto, ON – The puck drops on the 2017-18 Canadian Hockey league season on Thursday officially launching a historic countdown to the 2018 Mastercard Memorial Cup which will see the prestigious Memorial Cup presented for the 100th time.

“It is with great pride that we commemorate the historic 100th presentation of the Memorial Cup with a season long celebration,” said CHL President David Branch. “We hope to capture, preserve, and enhance the legacy of this prestigious trophy through initiatives that will engage the entire nation and honour the brave men and women who served and continue to serve our country.”

The centennial celebration will take place May 17-27, 2018, and will feature the host Regina Pats who competed in the very first Memorial Cup championship in 1919, along with the 2018 champions from the Western Hockey League, the Ontario Hockey League, and the Quebec Major Junior Hockey League.

“We’re extremely proud to be a part of the Mastercard Memorial Cup and to celebrate the 100th anniversary of a championship that has meant so much to hockey fans and Canadians over the past century,” said Milos Vranesevic, senior vice president, Marketing and Communications, Mastercard in Canada.

Some of the CHL’s highlights in advance of May’s championship include:

LOGO: The 100th celebration logo featuring title sponsor Mastercard and the iconic poppy in partnership with the Royal Canadian Legion will be proudly displayed on rinkboards across the country for all games of the 2017-18 season in all venues.  The logo will also be converted into a sweater patch that will be worn by all clubs as well as on-ice officials beginning November 11 to coincide with Remembrance Day games around the league.

MEMORIAL CUP TOUR: One of the most prestigious trophies in all of sport will travel from coast-to-coast visiting select CHL markets beginning in November.  The tour will incorporate stops at various military bases and legions, while fans in 17 communities will have the opportunity to see the Memorial Cup in their arena concourse, pose for photos, and enjoy a unique game day experience.

TEAM OF THE CENTURY: 99 teams have hoisted the Memorial Cup since 1919 featuring many of major junior hockey’s brightest talents and future NHL stars.  Fans will have the opportunity to explore the history of winning teams then help select the best unit to ever be crowned Mastercard Memorial Cup champion through an online vote, with participants eligible to receive great CHL prizes including a trip to the 100th Mastercard Memorial Cup in Regina.

CHAMPIONS VIDEO SERIES: Every champion has a story to tell and a number of these stories will be shared with fans over the course of the season in a special video series highlighting past winners.  Get to know some of the names engraved on the cup and enjoy the moments of glory from some of history’s most memorable victories.  The series will be introduced online with weekly segments and will play on videoboards in arenas across the CHL.

COLLECTIBLES: Fans will have the opportunity to own a piece of history to help commemorate the 100th edition of the Mastercard Memorial Cup.  A specially designed collector coin will be sold by CHL clubs and available through CIBC, the Official Bank of the CHL.

Additional details regarding specific initiatives will be announced throughout the season to coincide with the launch of individual properties.

The Memorial Cup has a rich tradition that has shaped the way junior hockey is played in North America.  The trophy was original known as the OHL Memorial Cup and was donated by the Ontario Hockey Association in March, 1919, in remembrance of the many soldiers who paid the supreme sacrifice for Canada in the First Wold War.  In 2010 the Memorial Cup was rededicated to the memory of all fallen Canadian Military Personnel.