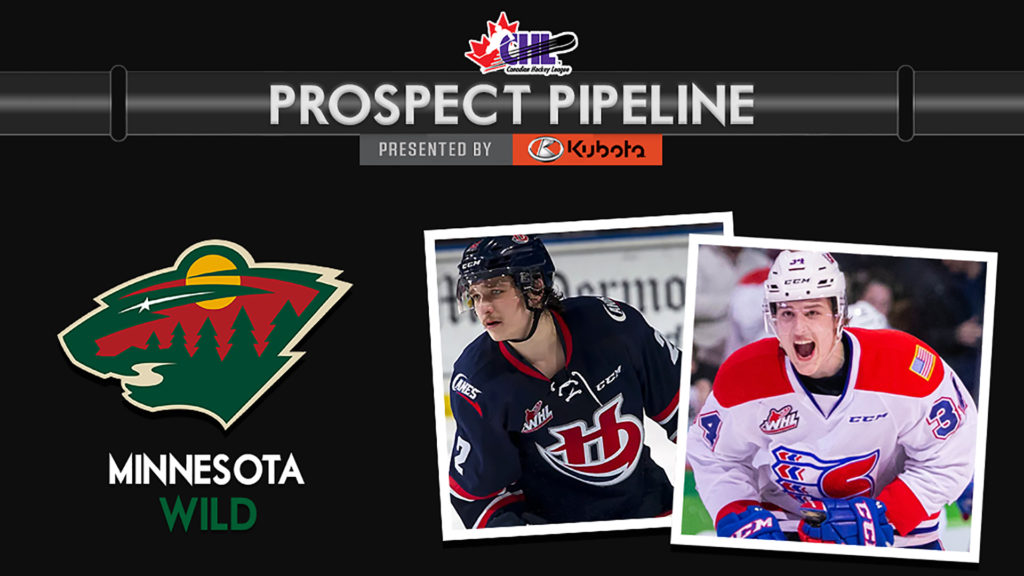 A smooth skating blue-liner, Calen Addison brings a strong offensive skill set with an adept ability to quarterback the power play. The second overall selection from the 2015 WHL Draft, Addison ultimately suited up for four full seasons with the Lethbridge Hurricanes from 2016-20. The talented rearguard twice reached 65 points in a single season before closing out his final campaign with north of point-per-game production that counted 10 goals and 42 assists across 50 appearances, good for seventh among defencemen league-wide as well as a spot on the WHL Eastern Conference First All-Star Team. Originally chosen by the Pittsburgh Penguins in the 2018 NHL Draft before shifting to Minnesota as part of a February 2020 deal, Addison played the past season on loan in the pro ranks where he saw a trio of showings with the Wild – and then another three in the postseason – though the majority of his time was spent with the AHL’s Iowa Wild where he finished tied for third in team scoring and first among all rearguards with 22 points in 31 games and was later recognized as part of the AHL All-Rookie Team. Internationally, the 20-year-old Brandon, Man., native has also been called upon by Hockey Canada on several occasions, most notably at the 2020 World Juniors where he led all tournament defencemen with eight assists and helped the Great White North take home the gold medal, his second such feat after wrapping up a first-place finish with Canada at the 2018 Hlinka Gretzky Cup.

#WHLCanes defenseman Calen Addison has been named the WHL Eastern Conference's Defenseman of the Year!

Noted for his high-level hockey IQ, the Spokane Chiefs left-wing put his talent on display during the 2019-20 campaign when he put together a dominant 107-point season that counted 48 goals and 59 assists across 63 appearances. In all, it marked an astounding 45-point uptick from the prior season when Beckman finished second among all rookie scorers, and one that ultimately saw him lead all WHL players in the goals and points columns. By season’s end, Beckman was presented with the Four Broncos Trophy as the league’s Player of the Year and was also named to the WHL Western Conference First All-Star Team. Not yet finished, Beckman returned for the WHL’s recently completed abbreviated campaign where he once again flashed his offensive intrigue in posting a team-leading 27 points through 21 appearances that followed up on an impressive start in the pro ranks earlier in the year when the 2001-born forward came up with five points through nine games with the AHL’s Iowa Wild. A native of Saskatoon, Beckman was chosen by the Wild with the 75th pick in the 2019 NHL Draft.

Adam Beckman, 2019-20 WHL Player of the Year, is on his way back to the @spokanechiefs from the @IAWild.

A natural leader, Giroux captained the Saginaw Spirit for his final two seasons with the club, guiding the club on and off the ice. Giroux’s most recent season also doubled as his career best where he realized offensive highs in all three major categories to finish third in team scoring with 75 points. In all, that performance also saw the 2000-born left-wing find the back of the net 44 times, a total outpaced by just five players league-wide, bringing his career numbers to 194 points through 249 appearances over four years. The Hanmer, Ont., native then shifted to the pro ranks for 2020-21 where he competed on loan with the minor-league Iowa Wild and showed a strong ability to make a good transition to that level by putting up 19 points through 34 games. Chosen by Minnesota in the fifth round of the 2018 NHL Draft, Giroux came to terms on an entry-level contract with the club in March 2020.

Limited to 28 games last season due to injury, the budding blue-liner returned to the ice for the WHL’s recently completed campaign and put together a solid bounce back year in which as a first-year captain he put up 18 points through 23 games to finish second in team scoring and eighth overall among all rearguards league-wide. A first-round pick from the 2017 WHL Draft, Hunt has spent three full seasons with Moose Jaw in which he has shown himself to be a disciplined defender who has continued to round out the offensive side of his game. Additionally, the product of Brandon, Man., has also shown his skill set on the international stage, making five appearances with Team Canada at the 2019 Hlinka Gretzky Cup en route to a silver-medal finish. Prior to returning to the Warriors this season, Hunt also saw a brief showing at the pro level, making six appearances with the AHL’s Iowa Wild which saw him net his first professional goal. Hunt, 19, was selected by Minnesota in the third round of last summer’s NHL Draft.

A modern goaltender who brings ideal size, the Peterborough Petes netminder was among the league’s busiest in 2019-20, making 49 appearances in which he came away with 31 victories coupled with a .913 save percentage and a 2.75 goals-against average to rank amongst the league’s best in all three categories. Originally chosen in the 2016 OHL Priority Selection, the 20-year-old has since competed in 121 contests over three seasons with the Petes, while on the international stage the native of Brantford, Ont., earned further accolades as part of the silver-medal winning Team Canada Black at the 2016 World Under-17 Hockey Challenge. A second-round selection from the 2019 NHL Draft, Jones played on loan in the pro ranks for the past season where he came away with a winning record through 19 appearances at the AHL level.

Chosen with the second pick in the 2017 CHL Import Draft, the Russian-born centre impressed over three years with the Moncton Wildcats from 2017-20 in which he collected 201 points through 144 career contests, highlighted by a 99-point finish in his most recent season that ranked second to only Alexis Lafreniere league-wide. By year end, Khovanov was recognized as part of the QMJHL First All-Star Team, his second accolade of significance that season following a silver-medal win with Russia at the 2020 World Juniors where he finished second in team scoring with eight points through seven games. The 2000-born forward then returned overseas for the past season where he competed on loan, with most of his playing time coming with the tier-two Bars Kazan that saw him finish second in team scoring with 24 points through 30 games. A third-round selection from the 2018 NHL Draft, Khovanov signed his entry-level contract with Minnesota the following March.

This year's top points award goes to none other than Alex Khovanov with 99 regular season points! #DefendTheDen

A first-round selection from the 2019 CHL Import Draft class, the Czech native joined the Kelowna Rockets in the ensuing months where in his first season in the North American environment he proved to be a quick study as he finished first in team scoring with better than point-per-game production that counted 25 goals and 33 assists through 55 outings and ranked third among league freshmen. The 19-year-old right-wing was then loaned overseas for the past season, splitting time in the Czech Republic pro leagues that ultimately totaled 24 contests in addition to a five-game showing at the 2021 World Juniors with his home country in which he finished tied for second in team scoring with three points. The gifted offensive talent was chosen by the Wild in the fifth round of last summer’s NHL Draft.

Pavel Novak goes off the board in the fifth round to the @mnwild! #KelownatotheNHL x #mnwild pic.twitter.com/dBRYIGG2M7

A throwback-style defender, the Soo Greyhounds blue-liner brings a desirable playing style mixed with an even better compete level. Offensively, O’Rourke has also continued to round out his game over a pair of seasons in the OHL, highlighted by a 37-point finish in 2019-20 in which the first-year captain ranked third in team scoring among defencemen. Originally chosen with the 20th pick in the 2018 OHL Priority Selection, O’Rourke’s impressive sophomore year came on the heels of a strong first season in which he was recognized as part of the OHL Second All-Rookie Team after he put up 22 points through 62 games, good for fifth in scoring among all first-year rearguards. The 19-year-old then competed on loan this past season, making 33 appearances with the AHL’s Iowa Wild that provided him with a taste of the pro ranks. Internationally, the product of Bowmanville, Ont., has also seen plenty of success with the Great White North, highlighted by All-Star Team recognition at the 2018 World Under-17 Hockey Challenge when as part of Team Canada Black he led all tournament defenders with six points in five games.

Congratulations Ryan O'Rourke on being drafted by the @mnwild in the 2nd round!#houndsnation pic.twitter.com/ya8Bz1zx3V

Strong in all zones, the dependable centre is also an offensive dynamo who brings strength and a gifted scoring touch down the middle of the ice. A first-round selection from the 2018 CHL Import Draft, the Austrian-native joined the Ottawa 67’s later that fall and made the most of it, coming away with a dominant first season that saw him register 65 points counting 29 goals and 36 assists across 53 appearances, good for second place among all freshmen league-wide as well as a spot on the OHL Second All-Rookie Team. Not yet finished, Rossi then reached new offensive heights as a sophomore, exploding to a 120-point finish that ranked top spot from coast to coast as he was later presented with the Red Tilson Trophy as the OHL’s most outstanding player, in addition to a spot on the league’s First All-Star Team. Selected ninth overall in the 2020 NHL Draft, Rossi has also realized similar success on the international stage, including top-three player recognition with Austria at the 2021 World Juniors. The 19-year-old is poised to continue his strong play in the coming campaign as part of the Wild organization.

Reigning Red Tilson Trophy recipient, #CHL top scorer and @mnwild first round #NHLDraft pick Marco Rossi (@marcorossi2383) will be representing his native Austria in their first trip to the #WorldJuniors since 2010. 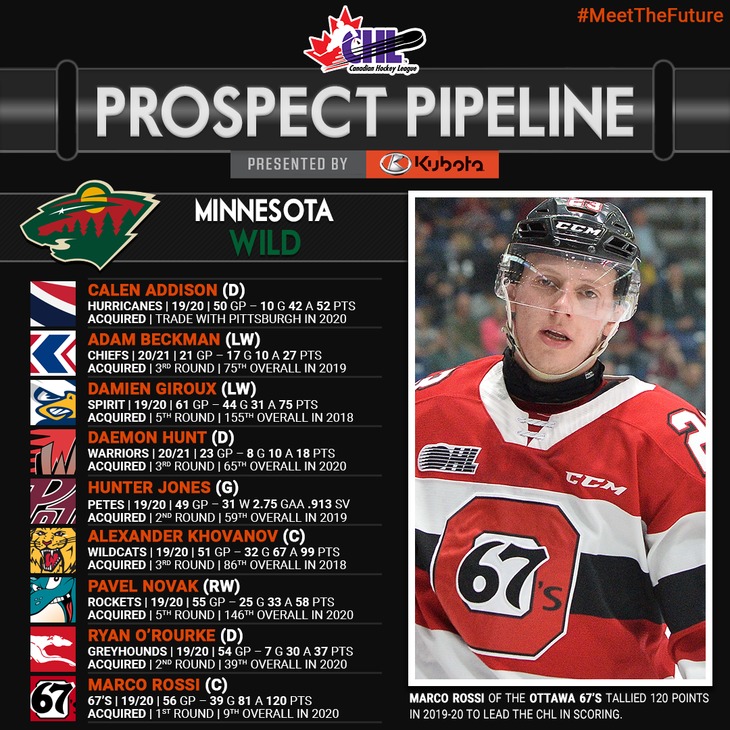