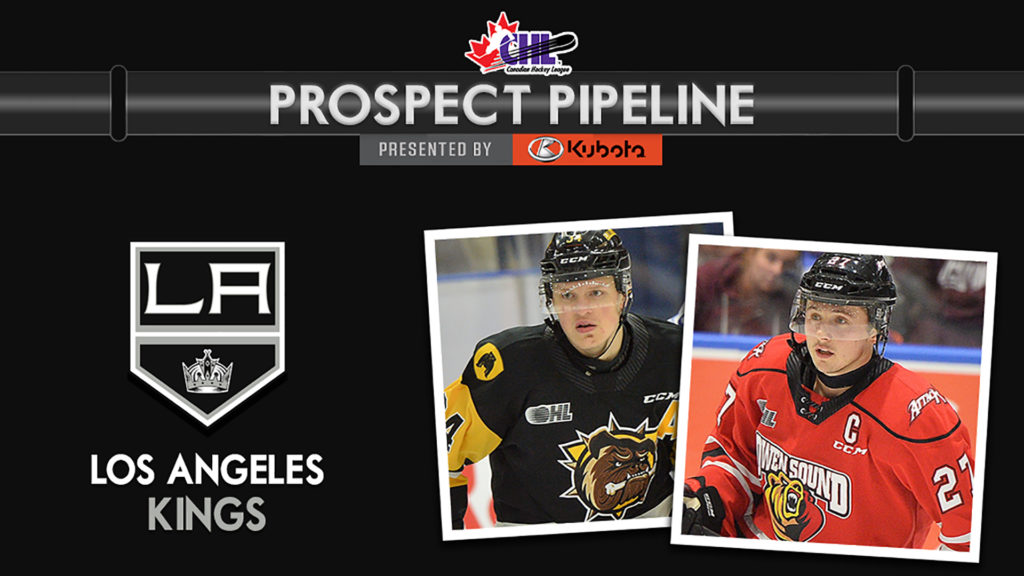 The second overall selection from the 2020 NHL Draft, the hulking Sudbury Wolves centre brings elite skill down the middle of the ice as demonstrated over a pair of seasons in the OHL in which he racked up 143 points counting 61 goals and 82 assists across 109 career contests. Originally chosen with the top pick in the 2018 OHL Priority Selection, Byfield went on to make an immediate impression with the Wolves, providing near point-per-game production to the tune of 29 goals and 32 assists in 64 showings that helped him earn recognition as the 2018-19 CHL Rookie of the Year. Following up that performance, the future star made even more offensive strides as a sophomore, where despite being limited to 45 appearances he finished 14th in league-wide scoring with 82 points and earned a spot on the OHL Third All-Star Team. A native of Newmarket, Ont., Byfield has also gotten the call to Team Canada on several occasions, highlighted by a gold-medal victory at the 2020 World Juniors. Playing on loan in the pro ranks this season, the 18-year-old saw six games with Los Angeles in which he picked up his first NHL point in addition to a 32-game stint with the Kings’ farm club where he impressed with eight goals and 12 assists for 20 points.

History has been MADE 👊 Quinton Byfield becomes the highest-ever drafted Black Player in the @NHL history.

Originally chosen by the Kingston Frontenacs with the second pick in the 2019 CHL Import Draft, the Slovakian-born left-wing ultimately joined the club midway through the season where despite the delayed start and his first-ever experience on North American ice he dazzled in coming up with 33 points counting 11 goals and 22 assists in 28 appearances, good for an OHL rookie-leading 1.18 points per game in addition to OHL Second All-Rookie Team honours. Following his mid-round selection in last summer’s NHL Draft, the 18-year-old then returned overseas where he competed on loan with HK Dukla Trencin of the highest-level Slovakian league and chipped in 19 points over 32 games before making a brief two-game stint with the Ontario Reign, the Kings’ top farm club, in addition to a five-game showing with Slovakia at the most recent World Juniors.

Martin Chromiak reflects on the 2020 @NHL Entry Draft and how special it was to have been selected by the @LAKings.

Sleepless in Slovakia: Martin Chromiak is thrilled to be drafted by LA by @BenSteiner00

A natural leader, Dudas was appointed captain of the Attack prior to the 2019-20 season and backed up that honour offensively by providing north of point-per-game production that counted 15 goals and 38 assists across 48 appearances. In all, the 2000-born centre spent four seasons with Owen Sound following his 10th overall pick in the 2016 OHL Priority Selection and ultimately proved to be a consistent offensive producer as evidenced by his 201 points collected in 240 career contests. The product of Parry Sound, Ont., has also been a frequent participant on the international stage, helping Canada to gold-medal wins at the 2017 Hlinka Gretzky Cup and the 2020 World Juniors in addition to a silver-medal finish at the 2016 World Under-17 Hockey Challenge as part of Team Canada Black that saw him finish for the team lead in scoring with five points. A fourth-round selection in the 2018 NHL Draft, Dudas played on loan in the pro ranks for the 2020-21 campaign, picking up 11 points through 37 appearances with the AHL’s Ontario Reign.

How sweet it is.

A modern goaltender who provides excellent net coverage, the 2000-born talent spent four seasons in the OHL split between the Mississauga Steelheads and Kitchener Rangers. Beginning his junior career with the Steelheads in 2016-17, Ingham saw a strong start in coming away with a 17-6-3-3 showing through 31 appearances as he was later recognized part of the OHL First All-Rookie Team. The budding netminder was again part of the end-of-year honours last season where with the Rangers he found the win column in 33 of his 46 outings coupled with an impressive .917 save rate that ranked third-best league-wide and helped him earn a spot on the OHL Second All-Star Team. While Ingham made 177 appearances at the junior ranks, the Barrie, Ont., native has also seen time on the international stage, guiding Team Canada Black to a silver medal at the 2016 World Under-17 Hockey Challenge. A late selection from the 2018 NHL Draft, Ingham split time in the pros this season where he made 14 total appearances with the AHL’s Ontario Reign and the ECHL’s Greenville Swamp Rabbits.

We're proud to announce that Jacob Ingham (@JacobIngham_) has been named the 2019/20 #OHL Humanitarian of the Year!

Among the most gifted goal scorers in the circuit, the Bulldogs sniper can light the lamp from all areas of the offensive zone and did so last season with Hamilton as evidenced by his 44-goal, 98-point finish that came in 57 games and helped him earn recognition as part of the OHL First All-Star Team. That performance also came on the heels of a dominant second season when the talented right winger found the back of the net 51 times, while his 102 points made him one of just nine players league-wide to reach the triple-digit point plateau as a member of the OHL Second All-Star Team. A second-round choice from the 2017 OHL Priority Selection, Kaliyev got off to an early start in the junior ranks, wrapping up his rookie campaign with 48 points and as one of only two OHL freshmen to score 30 or more goals before later being named to the OHL Second All-Rookie Team, in addition to helping the Bulldogs to a franchise-first OHL playoff championship. The Staten Island, N.Y., native has also drawn international acclaim for his play with Team USA, most notably at the 2021 World Juniors where his eight points in seven games saw him finish second in team scoring and helped the Americans take home the gold medal for the second time in five years. Meanwhile, this season also saw the 19-year-old play on loan in the pro ranks, counting 40 games with the minor-league Ontario Reign in which he finished first in team scoring with 31 points. Additionally, the 2019 second-round pick made a lone appearance with the Kings in early February but made the most of it, seeing nearly 15 minutes of ice time and registering his first-ever NHL goal.

Making history last season as the first WHL goaltender to record a shutout and score a goal in the same game, the Czech-born netminder put together an impressive inaugural campaign with Spokane following his first-round selection in the 2019 CHL Import Draft. In all, through 32 appearances with the Chiefs, the imposing goaltender finished with 22 victories while posting a .917 save percentage and a 2.73 goals-against average that ranked amongst the league’s best. Meanwhile, this season saw Parik compete overseas due to pandemic issues, where his primary playing duties came in a 10-game slate with the tier-two HC Benatky nad Jizerou. A third-round selection from the 2019 NHL Draft, the 20-year-old has also competed with the Czech Republic in the past two World Juniors.

🚨 Goalie goal alert 🚨@LAKings prospect @Parik302 scores to top off a 3-0 shutout for the @spokanechiefs!

Blending high-end acceleration with good on-ice vision, the Val-d’Or Foreurs rearguard is a modern-style defenceman where despite his smaller stature he displays a strong ability to move the puck up the ice and decorate the scoresheet. Debuting with the Moncton Wildcats in 2018-19, Spence made an early impression in leading all rookie rearguards league-wide with 49 points, helping him later earn recognition as the QMJHL’s Rookie of the Year in addition to a spot on the league’s All-Rookie Team. Not yet finished, Spence then saw an uptick in his production as a second-year skater where across 60 appearances he dazzled with nine goals and 43 assists and was presented with the Emile Bouchard Trophy as the QMJHL’s Defenceman of the Year in addition to recognition as part of the league’s First All-Star Team. Splitting this past season between the Wildcats and Foreurs, the 20-year-old was again an offensive force from the back end, putting up 40 points through 32 showings before adding another 20 points in 15 playoff outings. A fourth-round pick from the 2019 NHL Draft class, Spence and the Kings agreed to an entry-level contract the following June.

From Moncton to Val-d'Or with a stop in Edmonton along the way, no matter where Jordan Spence played this season, he has one goal in mind : to win. #PresidentCup | @ForeursVD

Best remembered for netting the gold-medal winning goal at the 2020 World Juniors, the Peterborough Petes centre is noted for his ability to play in all situations in addition to his budding playmaking skills that allow him to set up his linemates for prime opportunities. Originally chosen by the Niagara IceDogs with the 12th overall pick in the 2016 OHL Priority Selection, Thomas debuted with the club later that fall and put together a successful first season that saw him finish as part of the OHL First All-Rookie Team after tallying 48 points counting 21 goals and 27 assists in 61 contests. It was a sign of what was to come as Thomas finished the next two campaigns with impressive totals counting 81 and 102 points, with the latter season seeing him as one of just nine skaters from across the OHL to reach the 100-point plateau. Thomas then joined the Petes midway through his fourth season where through 22 showings he continued to impress by recording nine goals and 31 assists that by year-end brought his season total to 84 points in only 49 games, while his four-year career total counts an astounding 315 points in 241 appearances. Competing on loan this season with the AHL’s Ontario Reign, the 2000-born forward showed a strong ability to translate his offensive game to the pro ranks in putting up 26 points in 40 games. Internationally, beyond World Junior supremacy, the 2018 second-round pick’s list of accolades also counts a first-place finish at the 2017 Hlinka Gretzky Cup.

Congrats @AkilThomas2!@LAKings prospect of @PetesOHLhockey recorded his 300th career #OHL point with three assists in a win on Saturday. 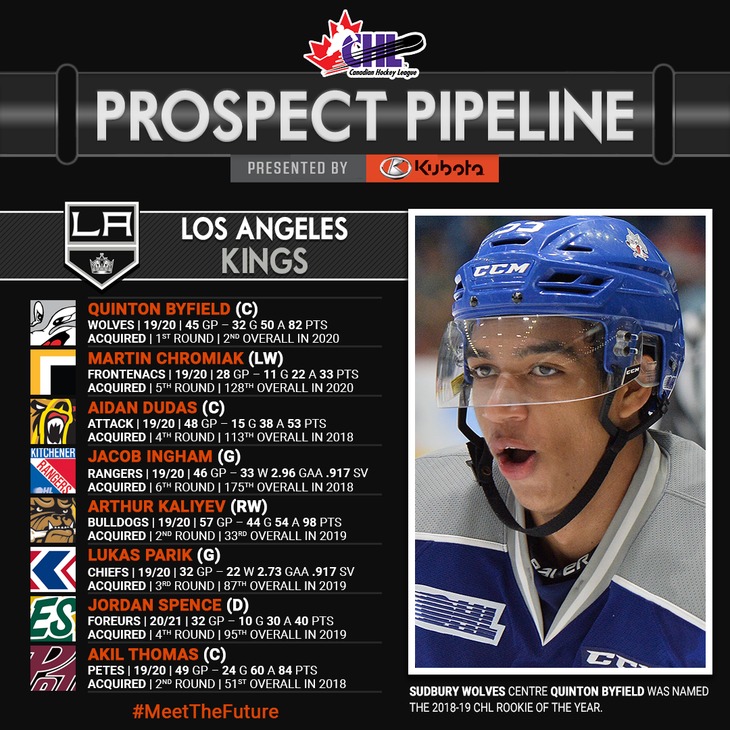