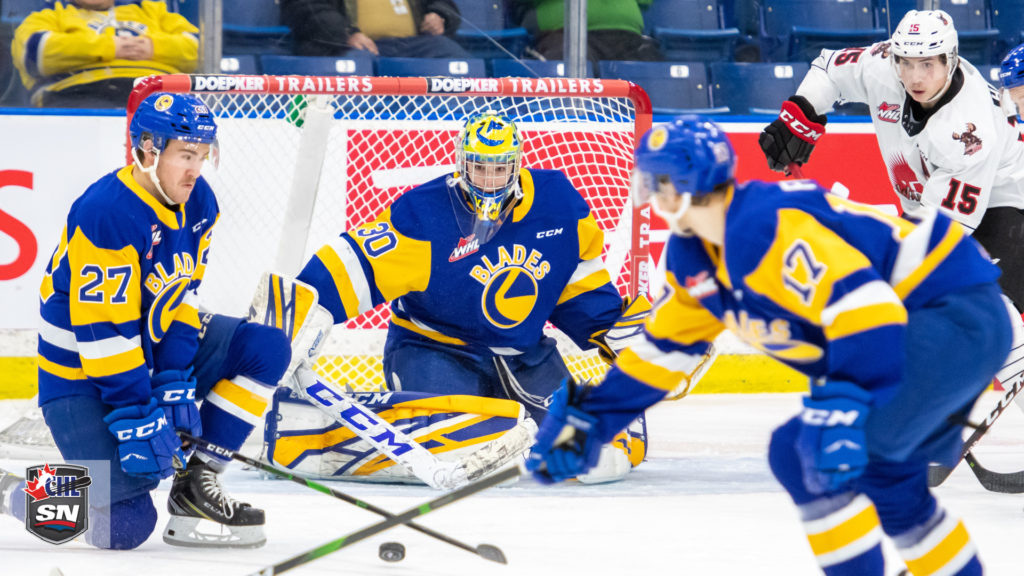 Koen MacInnes was on his game for a full 60 minutes Sunday afternoon, recording a 20-save shutout to help the Saskatoon Blades beat the Moose Jaw Warriors 4-0 in Canadian Hockey League action on Sportsnet.

The 17-year-old from Burnaby, B.C. stole the spotlight in his fifth-ever WHL game, stopping 10 shots in the first, two in the second, and eight more in the third.

After MacInnes kept the Blades tied with the Warriors through 20 minutes, the home side found their offensive footing in the middle frame.

It all started with Randen Schmidt winning a battle along the boards and firing it across the offensive zone to Zach Huber, who was ready to rip home the one-time shot from the slot to make it 1-0 for the Blades.

Tristen Robins struck minutes later on an absolute snipe of a shot to make it 2-0. After gaining control of the puck off a bounce along the boards, Robins shifted as if he were heading into the slot area, only to cut back out above the face-off dot to the left of Adam Evanoff. The extra time and space was more than enough for Robins to unleash his shot and double Saskatoon’s lead.

Late in the third, Riley McKay got in on the scoring fun as his initial shot was blocked, but the rebound came right back to him and he blasted it from the slot past Evanoff for the 3-0 goal. Huber’s second of the game would go into the empty net with 1:37 left in regulation to make it a 4-0 final.

Despite taking the loss, Evanoff had a strong performance in net for the Warriors. The 19-year-old stopped 45 of 48 shots directed his way throughout the game.

Up next for the Blades is the start of their U.S. Division road trip against the Spokane Chiefs on Wednesday, November 20 (7:05 p.m. PT). The Warriors return to action on Friday, November 22 (7:30 p.m. MT) against the Medicine Hat Tigers.