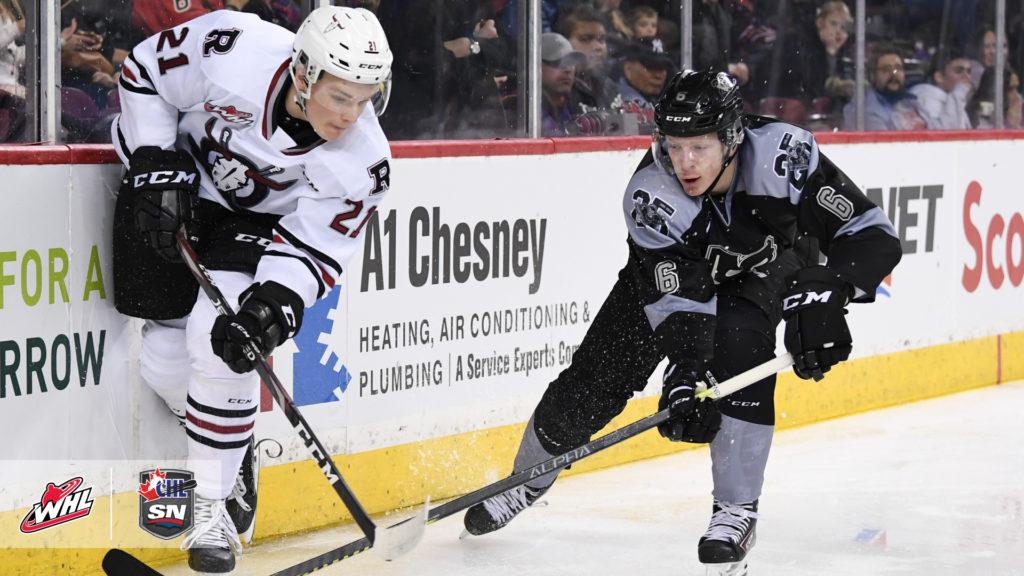 The Canadian Hockey League on Sportsnet spotlight will shine brightly on the Central Division once again this weekend when the Calgary Hitmen play host to the Red Deer Rebels.

Saturday’s contest will be a historic one as the Hitmen host their ‘Every Child Matters’ game presented by Siksika Health Services in partnership with Siksika Child & Family Services and First Nations Health Consortium.

There will be a celebration of the Blackfoot culture throughout the game, with the goal of empowering indigenous youth through sport. The game will also be broadcast in the Blackfoot language across the province on Windspeaker Radio.

Due to a four-game winning streak and a 7-3-0-0 record in their previous 10 games, the Hitmen enter this weekend’s action as the hotter of the two teams. Those four wins include a sweep of a home-and-home set against the Rebels last weekend with 5-2 results in both rinks.

As part of the season series, this will serve as the fifth of eight contests between the two clubs and the third of four meetings in 15 days. Both teams will also be facing a back-to-back situation with the Rebels hosting the Winnipeg ICE and the Hitmen hosting the Wheat Kings Friday.

While separated significantly in points and in different spots in the wild card standings, the game still has plenty of meaning to the playoff hopes of both teams. Slotted into the first wild card spot, the Hitmen are eager to pursue the top three teams in the Central Division, trailing the third place Medicine Hat Tigers by seven points. They also have a five-point advantage over the Saskatoon Blades, who hold the second wild card spot.

Toronto Maple Leafs prospect Riley Stotts has taken over offensively in the season series against the Rebels, posting 10 points (7G-3A) in four games to lead skaters from both sides. It began with a hat trick during WHL Opening Week back in late September and most recently featured him recording six points (3G-3A) over the home-and-home set. Having already set a career-high in goals while also closing in on personal bests for assists and points, expect Stotts to be a factor in Saturday’s game.

Between the pipes, Brayden Peters has been one of the best goaltenders in the WHL during the calendar month, posting a 7-2-0-0 record, 1.89 goals-against average, and a 0.926 save percentage. The Taber, Alta. product has accomplished all that as a rookie and will be in the hunt for more this weekend.

Though their season hasn’t shared the same successes as other teams within their division, the Rebels remain a determined squad. A 5-4 win against the Wheat Kings Wednesday represents the Rebels ability to compete with the upper echelon of teams in their conference.

As far as the Rebels might be concerned too, they’re still in the playoff hunt. Even with a 15-point gap between themselves and the Blades, if the Rebels can piece together a consistent run down the stretch, they may improve their odds of qualifying for the WHL Playoffs for a sixth-straight season.

Offensively, the Rebels have been guided by the likes of Arshdeep Bains and Ben King as well as 20-goal scorer Josh Tarzwell. Entering Friday’s play, King leads the Rebels in scoring for the calendar month while Bains’ five goals lead the team in through the first 30 days of the month.

Though he just has three goals in January, Tarzwell has reached the 20-goal plateau for the first time in his WHL career and would be considered a threat to score each time he touches the ice. It was Tarzwell taking matters into his own hands on December 1, scoring in overtime to defeat the Hitmen in Calgary so his presence won’t be taken lightly either.

Be sure to catch all the action from coast-to-coast on Sportsnet starting at 1:30 p.m. MT live from Calgary!

"We take pride in our language. This is a chance to showcase our language for other people."

Introducing Francis Wolf Leg and Stewart Breaker, the duo who will broadcast Saturday's 'Every Child Matters' game in Blackfoot!

Tomorrow is the big day!