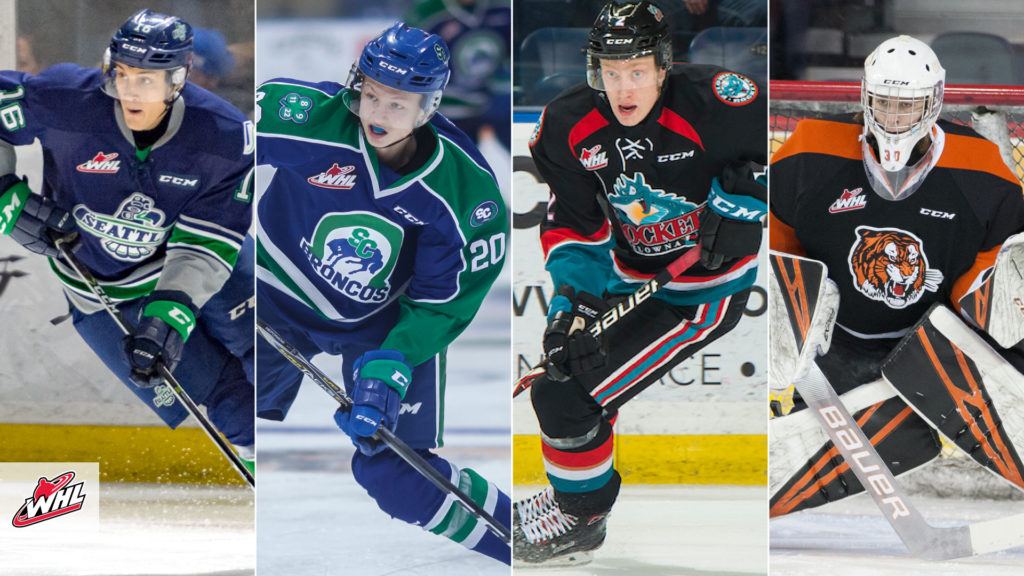 In certain cases, just one player can make a world of difference on a team’s performance. They can cause a spark to ignite, a team to come together, or even a revolution in history. With the 2019 Canadian Hockey League Import Draft scheduled for Thursday, June 27, that difference maker could be selected by a Western Hockey League club.

While the WHL clubs may see many benefits of adding a non-North American player to their rosters, it also allows the players to gain knowledge and eventually confidence in the North-American style game, aiding in the development towards beginning a professional hockey career.

With the first-overall selection in this year’s Import Draft, the Swift Current Broncos may be looking for another ‘Aleksi Heponiemi’ to add to their roster to continue rebuilding their team after being crowned 2018 WHL Champions. The Finnish forward was selected 10th overall in the 2016 CHL Import Draft and was instrumental in the Broncos’ WHL Playoffs run, recording 30 points (5G-25A) in 26 games.

At the end of the 2017-18 WHL Regular Season, the Tampere, Finland native was also honoured with the Brad Hornung Trophy for the WHL’s Most Sportsmanlike Player of the Year, after registering 118 points (28G-90A) and only 28 penalty minutes in 57 games. Unsurprisingly, Heponiemi was also named WHL Rookie of the Year in 2017 after recording 86 points (28G-58A) and was subsequently drafted to the Florida Panthers in the second round, 40th overall in the 2017 NHL Draft and officially signed with the Panthers on May 15, 2019.

If the Broncos are lucky, they will be able to choose another ‘Heponiemi’ with the first-overall selection to help spark the re-ignition of the team’s success in the 2019-20 season.

When looking back at the 2017 WHL Champions, we see Copenhagen, Denmark forward Alexander True who was also highly essential to the Seattle Thunderbirds’ roster when he notched his 12th and most important goal of the 2017 Playoffs. The 48th-overall selection in the 2014 CHL Import Draft ensured a WHL Championship series win for the Thunderbirds and also helped the team capture its first championship in franchise history. Since then, True has signed an entry-level contract with the San Jose Sharks.

Jumping to the 2019 WHL Champion Prince Albert Raiders, they also found success in their most recent CHL Import Draft selection. While the Raiders will be the last of the WHL teams to select a player at 60th overall, their track record with Aliaksei Protas’ development this season could allow the Raiders to snag a promising prospect.

Protas, a Vitebsk, Belarus product was explosive in the 2019 WHL Playoffs scoring back-to-back hat tricks in the Eastern Conference Championship against the Edmonton Oil Kings. Although the rookie was a key factor in Prince Albert’s playoffs with 22 points (12G-10A) in 23 games, he also maintained a steady flow of goals and assists throughout the regular season, totaling 40 points (11G-29A) in 61 games. To cap off his season, Protas was selected by the Washington Capitals in the third round, 91st overall, in the 2019 NHL Draft.

Several other forwards including Joachim Blichfeld (Portland Winterhawks/ San Jose Sharks), Oliver Bjorkstrand (Portland Winterhawks/Columbus Blue Jackets) and Sven Bäertschi (Portland Winterhawks/ Vancouver Canucks) were drafted into the NHL with high potential for professional careers. Blichfeld, the recipient of the Four Broncos Memorial Trophy and Bob Clarke Trophy at the 2019 WHL Awards, recorded 114 points (53G-61A) in the 2018-19 campaign as another example of Import Draft players contributing to the success of the WHL.

Other recent CHL Import Draft notables include defenceman and Tampere-born product Lassi Thomson, who was phenomenal on the Kelowna Rockets’ blueline this season. After recording 41 points (17G-24A) in 63 games, Thomson was selected by the Ottawa Senators, 19th overall at the 2019 NHL Draft.

Many foreign-born goaltenders will also have the potential to impact a WHL team this season like Medicine Hat Tigers’ goaltender Mads Søgaard did.

The 6-foot-7, 190-pound netminder, dominated the crease in his rookie season with the Tigers posting a 19-8-2-2 record in 37 games, 2.64 goals-against average, .921 save percentage and three shutouts. Following his season’s performance, Søgaard was the second goaltender drafted in the 2019 NHL Draft, at 37th overall by the Ottawa Senators. If the Danish netminder returns to play in Medicine Hat next season, he could continue sparking the Tigers’ goal of reaching a WHL Championship.

No matter the country of origin, the CHL Draft imports selected by WHL clubs will be given the chance to make a world of difference for not only their team, but for themselves, as they take the next jump in their careers and across the world.

Two-round process will take place online at 11 AM ET with order of selection rotating through @TheWHL, @OHLHockey, and @QMJHL teams.