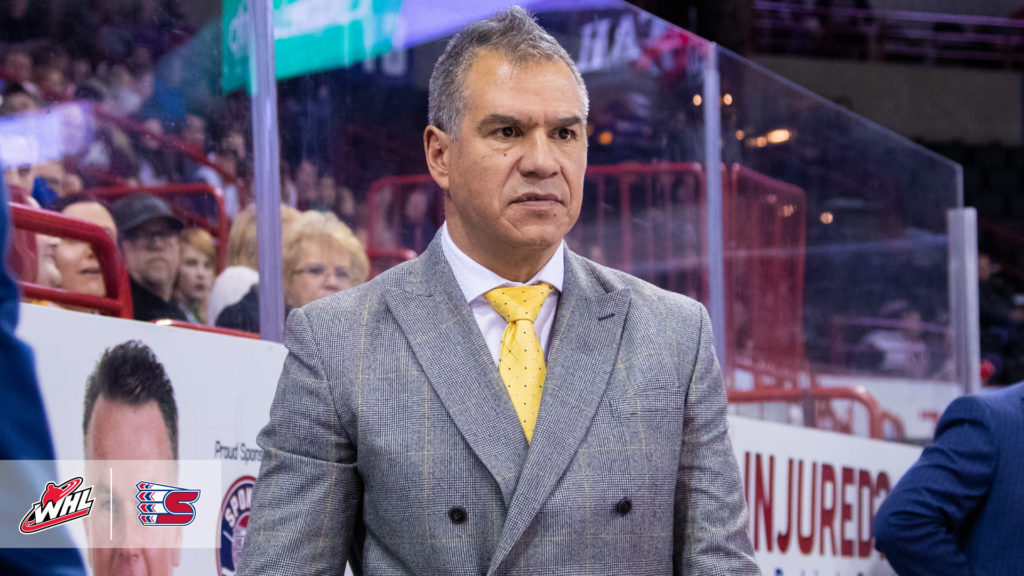 Spokane, Wash. — Spokane Chiefs’ head coach Manny Viveiros has accepted the head coaching position with the Henderson Silver Knights of the AHL, as announced by the team on Monday. He is the first ever head coach for the Silver Knights, who will be the affiliate of the NHL’s Vegas Golden Knights when they begin play next season.

“I would like to thank so many people from the Chiefs,” said Viveiros. “The executives from Bobby and Kathy Brett to Scott Carter, Mark Miles and Jim Hammett. Thank you to my coaching staff including Adam Maglio, Adam Deadmarsh and Dustin Donaghy, as well as Joe Hurley, Tim Lindblade and Chris Baird for all their hard work. From top to bottom, everyone in the organization and in Spokane as a whole welcomed us into the Chiefs family and made our time here so memorable.

“Even more importantly, I’d like to thank the players that I had the chance to coach last season. Having the opportunity to watch them mature and develop throughout the year was a pleasure and means so much more than wins and losses.

Viveiros spent one season behind the bench for the Chiefs, leading the club to a 41-18-4-1 record. Under his guidance, the Chiefs continuously improved and finished as the hottest team in the WHL, winning 10-straight before the season was cut short by the COVID-19 pandemic. Spokane had multiple players recognized with league awards, including the plus-minus leader (Noah King), defenseman of the year (Ty Smith) and player of the year (Adam Beckman).

“We would like to thank Manny and (his wife) Laurie for their time in Spokane,” said general manager Scott Carter. “Thank you to Manny for the way he treated our players, staff, host families and fans. Spokane will miss them.”

Viveiros adds to a long line of Spokane head coaches to make the jump to professional ranks, including his predecessor Dan Lambert, who joined the Nashville Predators of the NHL as an assistant for the 2019-20 season.

“The first day I met Bobby Brett,” Viveiros added, “he said, ‘once a Chief, always a Chief.’ I’m proud to forever be a member of the Chiefs’ family.”

Prior to joining the Chiefs, Viveiros was the Head Coach and Director of Player Personnel for the Swift Current Broncos from 2016-17 through 2017-18. He coached the Broncos to a WHL Championship in 2017-18 and was also named WHL Coach of the Year.

Manny Viveiros will be the first Head Coach in Silver Knights history 😄#HomeMeansHendersonhttps://t.co/8eQLYF5GJy