Chiefs’ Smith named WHL On the Run Player of the Week 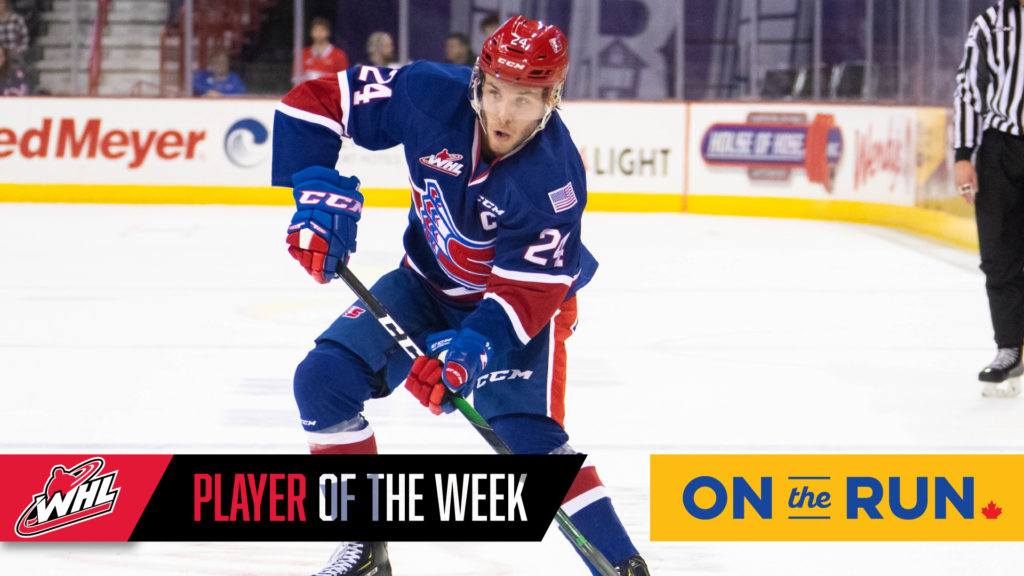 Calgary, Alta. – The Western Hockey League announced today that Spokane Chiefs captain Ty Smith has been named the WHL On the Run Player of the Week for the week ending October 6, 2019.

The New Jersey Devils prospect provided an instant impact in his return to the WHL, posting six points (3G-3A) and a plus-three rating in three games as the Chiefs earned a pair of victories. The wins helped elevate the Chiefs to first place in the U.S. Division.

In his season debut Friday, Smith recorded a pair of goals as part of a three-point night in a 5-1 win against the Seattle Thunderbirds. Smith scored the first and fourth goals of the game for the Chiefs, also earning an assist on their fifth goal. Smith was rewarded as the first star of the game and the third star of the night in the WHL.

Saturday, Smith scored his team’s opening goal in a 7-1 victory over the Tri-City Americans, earning first star honours for the evening. In the weekend finale, Smith recorded assists on his team’s second and third goals, earning third-star honours in the contest.

The 5-foot-11, 175-pound product of Lloydminster, Alta. currently ranks in a tie for third in WHL defensive scoring and in a tie for second in goals. The first-overall selection at the 2015 WHL Bantam Draft, Smith is the defending recipient of the Bill Hunter Memorial Trophy as WHL Defenceman of the Year as well as the CHL Defenceman of the Year. Smith was also named the recipient of the Daryl K. (Doc) Seaman Trophy as WHL Scholastic Player of the Year in 2018 and subsequently selected 17th overall by the Devils at the 2018 NHL Draft.

The Chiefs captain has been an offensive leader since his arrival in the WHL. In 197 WHL regular season games, he’s registered 182 points (29G-153A), including 11 power-play goals and seven game-winning goals. Smith has also appeared in 22 WHL playoff games, recording 16 points (3G-13A), including one game-winning goal.

Up next for the Chiefs is a home game against the Prince George Cougars on Friday, October 11 (7:05 p.m. PT) at Spokane Veterans Memorial Arena.