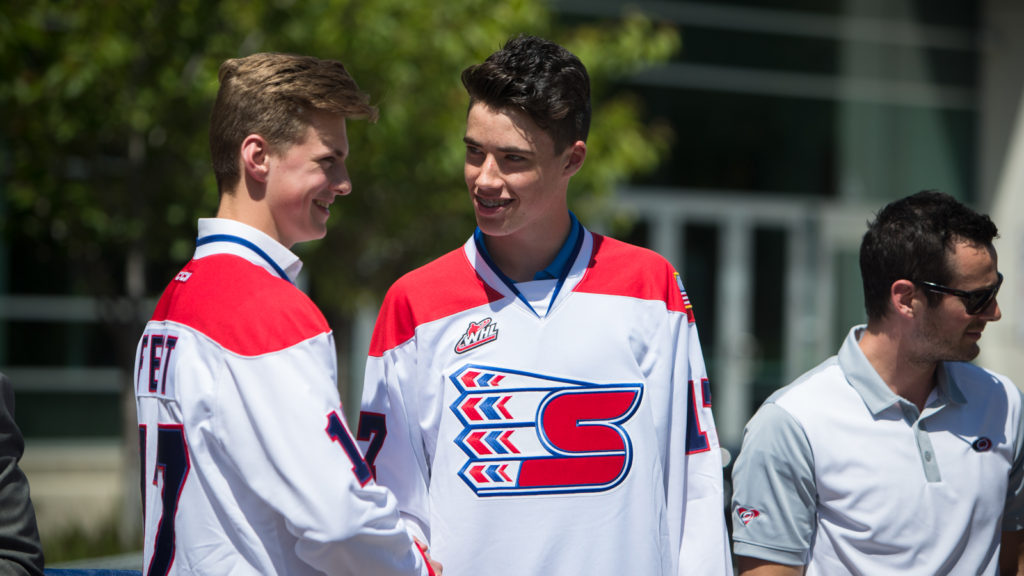 Finley, 14, was the Chiefs’ first-round (sixth overall) pick in May’s 2017 WHL Bantam Draft out of Kelowna, B.C.’s Pursuit of Excellence Hockey Academy Bantam Prep team. The 6-foot-3, 185-pound forward posted 23 goals and 25 assists in the CSSHL, racking up another six points (one goal, five assists) in five playoff games. Jack’s father, Jeff, played one season (2005-06) with Coach Lambert with the Hannover Scorpions of the German DEL.

“This has all just been an unbelievable experience,” Finley said. “It feels like a family here. I couldn’t be happier.”

Feist, 16, was originally a 2016 Chiefs’ Training Camp invitee, then listed by Spokane in September while playing for the Elite 15s team at the same POE Hockey Academy. After coming to camp at approximately 5-foot-10, Feist sprouted during the 2016-17 season and now measures 6-foot-2 and 170 pounds. The defenseman from Dawson Creek, B.C. scored three goals and added 14 assists for 17 points with the Elite 15s, adding 44 penalty minutes. He picked up one assist in five playoff games.

“It’s been a dream of mine to play major junior hockey,” Feist described. “I’m just really excited to get signed and get started.”

“Tyson was a list player from last year’s training camp and has continued to grow, improve and impress,” added Chiefs’ Assistant General Manager of Hockey Operations Chris Moulton. “He was an on-ice leader for his team at POE and worked very hard to advance his game, becoming a well-rounded defender.”

Ticket packages for the Spokane Chiefs’ 2017-18 season are on sale now with options as low as $70! For more information or to purchase, visit the Chiefs’ Ticket Office at Spokane Arena, call 509-535-PUCK or click here.