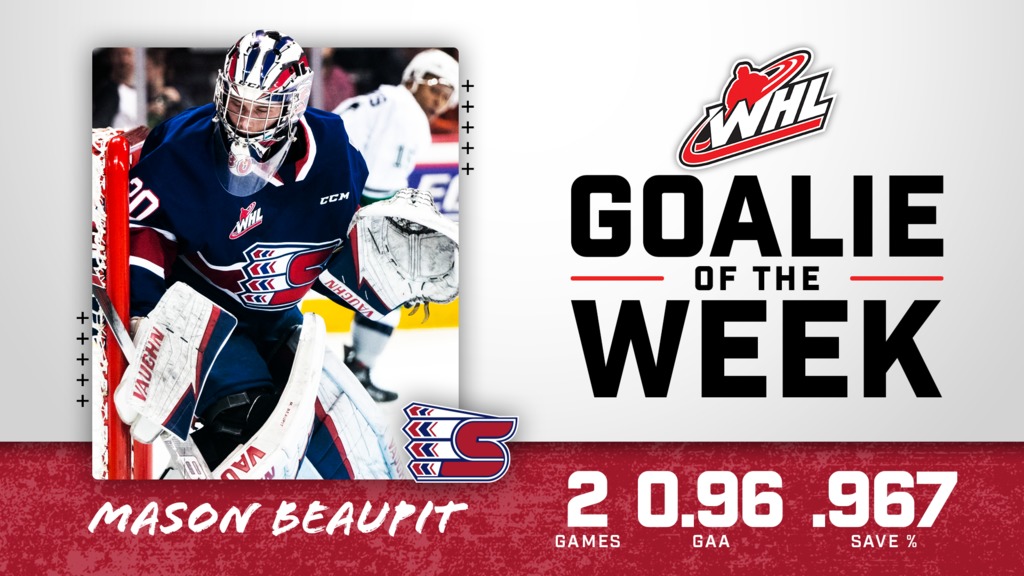 Beaupit, who appears on NHL Central Scouting’s Players to Watch list in advance of the 2022 NHL Draft, stopped 59 of 61 shots this past week, posting a 1-0-0-1 record, 0.96 goals-against average and .967 save percentage in the process.

The product of Surrey, B.C. began his week Wednesday, November 24 by turning aside 23 shots, helping the Chiefs collect their first home victory of the season in a 2-1 triumph over the Kelowna Rockets.

Two nights later in Kelowna, the 18-year-old made 36 saves in a 2-1 shootout setback, earning his second successive third star honour.

The 6-foot-5, 184-pound puck-stopper was originally selected by Spokane in the fourth round of the 2018 WHL Draft. In 25 career WHL appearances, all with the Chiefs, Beaupit holds a 7-10-5-1 record to go along with a 3.24 goals-against average, .905 save percentage and one shutout.

Beaupit and the Spokane Chiefs are in action four times this coming week, beginning Tuesday, November 30 when they play host to the Victoria Royals (7:05 p.m. PT, Spokane Veterans Memorial Arena).