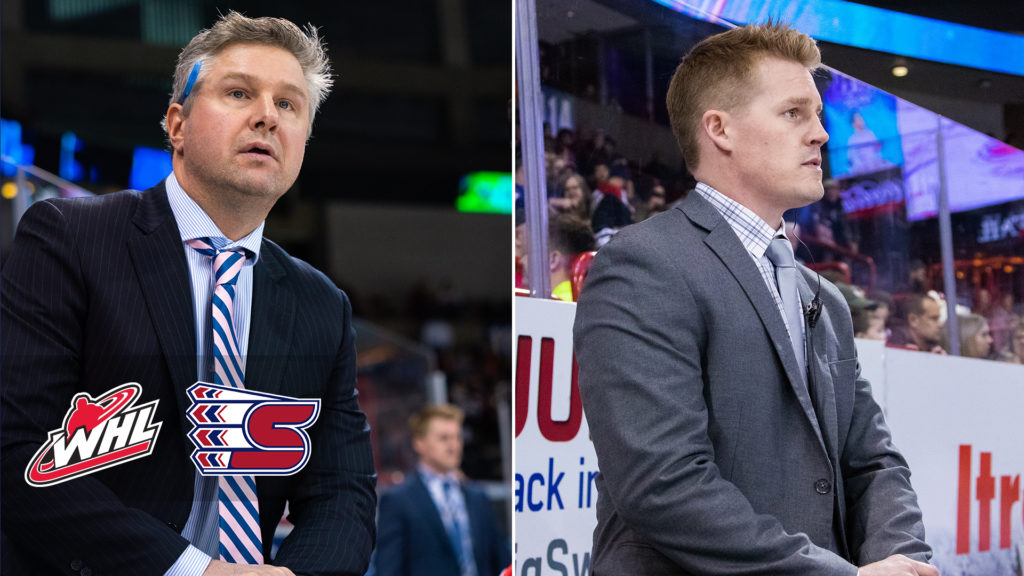 “I want to thank Bobby Brett, Mark Miles, Andy Billig and the entire Chiefs organization for the opportunity,” Smith said. “I want to thank Scott Carter for bringing me into the Chiefs family two years ago, and Matt Bardsley for having the confidence in me to allow me to continue working with the players and staff. I am very lucky to get to work with a great hockey ops staff, as well as the best front office group in the league — your support is much appreciated. The biggest thanks I have is to my wife Kelly, my son Kai and my daughter Vayda. Without their unwavering support, this opportunity would never be a possibility.”

The Winnipeg, Manitoba native has spent the last two seasons with the Chiefs as an Associate Coach before being named the Interim Head Coach in early February, 2022. After taking the reins, the Chiefs went 12-13-1-0 (0.481) from February 11 to April 16, capped by a 5-2-0-0 record in their last seven games and a late push into a WHL Playoffs spot as the seventh seed.

“I am very excited about this upcoming season and can’t wait for training camp to start,” Smith said. “The Chiefs have a strong tradition of success both on and off the ice. To be part of this moving forward is truly humbling.”

Smith was also recently selected as one of 15 Canadian Hockey League coaches for Canada’s national under-17 program for the 2022-23 season, as announced by Hockey Canada.

“We are excited for Ryan, who has earned this opportunity,” Chiefs General Manager Matt Bardsley said. “I consider him to be a modern-day coach who is a strong communicator, well-liked and respected by his peers and players, and has a strong focus on player development while preparing his team to compete and achieve overall success. After spending time with Ryan and getting to know him, along with how he sees the game as a coach in all areas, it became very clear that he is the right person to lead our group of players on and off the ice.”

Before joining Spokane for the 2020-21 season, Smith was the Assistant Coach for the Medicine Hat Tigers from 2018-2020. There, he helped lead the team to back-to-back 35-plus win seasons (35-27-6 and 41-19-3, respectively). The Tigers were ranked fourth in the Eastern Conference in 2018-19 with 76 points, losing in the first round of playoffs. They ranked second the following year with 85 points, but playoffs were canceled in the 2019-20 season due to the COVID-19 pandemic.

Smith got his start in the WHL with the Swift Current Broncos in 2015-16 as their Associate Coach. He spent three seasons with the Broncos, highlighted by the organization’s third Western Hockey League Championship in 2018. There, Smith coached under former Chiefs Head Coach Manny Viveiros, who earned WHL Coach of the Year in Swift Current’s championship season and is now at the helm of the Henderson Silver Knights (AHL).

Before that, Smith spent the 2014-15 season as the GM/Head Coach of the Humboldt Broncos (SJHL), where he led the team to a 24-25-5-2 record and qualified for playoffs.

Smith also has five years of head coaching experience with the Selkirk Steelers (MJHL), from 2009-2014, as well as one year as head coach of the Winnipeg South Blues (MJHL) for the 2008-09 season.

After playing three seasons in the Manitoba Junior Hockey League with the St. James Canadians (141-160-301), Smith went on to play professionally for 11 seasons, including 10 in Germany, before beginning his coaching career in 2008.

Dustin Donaghy moved into a full-time assistant role with the Chiefs in February of the 2021-22 season when Smith became the interim head coach.

“I am excited to continue working for an organization that shares my commitment to player development, not just on the ice, but off,” Donaghy said. “Being a Chief is more than just playing hockey. It’s about character, community and family. Once a Chief, always a Chief.”

Donaghy first joined Spokane’s coaching staff for the 2019-20 season as a part-time assistant under Head Coach Manny Viveiros after serving as an assistant coach with the Nanaimo Clippers of the BCHL from 2016-18.

“We are happy as well for Dustin, who will continue as an Assistant Coach in a full-time position,” said Bardsley. “He is a young, driven and eager coach who I believe has a bright future in this game. Dustin is a proud alumnus and has worked hard to earn this opportunity.”

In addition to Smith and Donaghy, the Chiefs are currently in discussions with adding another assistant coach to the staff to give the team three full-time coaches. An announcement for the third coach will be coming soon.

The Chiefs will start their 2022-23 campaign on the road against the Victoria Royals on September 23.