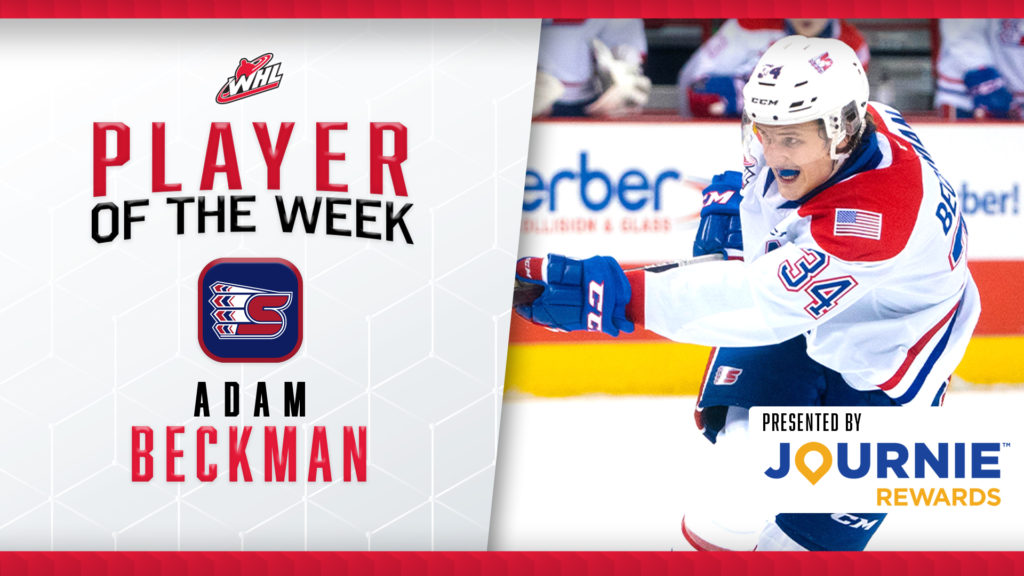 Calgary, Alta. – The Western Hockey League announced today that Spokane Chiefs forward Adam Beckman has been named WHL Player of the Week presented by Journie Rewards for the week ending May 2, 2021.

Beckman, a 19-year-old product of Saskatoon, Sask., recorded seven points (6G-1A), including two hat tricks, in three as the Chiefs went 2-0-1-0 this past week in the U.S. Division.

On Wednesday, April 28, the prospect of the Minnesota Wild recorded four points (3G-1A), including his first hat trick of the week, in a 5-3 victory over the Tri-City Americans. Beckman’s second goal of the night came on a power play late in the third period, and stood up as the game-winning goal. He was named first star of the game.

On Saturday, May 1, the 6-foot-1, 187-pound left winger once again sparked the Chiefs with his second consecutive hat-trick effort, leading to an 8-3 triumph over the Seattle Thunderbirds. Beckman made a difference on special teams, scoring his first of the night on a second-period power play before adding a shorthanded tally midway through the third period to complete the hat trick. Wedged in between was an even-strength goal late in the second period. Beckman was named first star of the game for his outstanding performance.

In 17 games this season, Beckman is tied for second in goal scoring in the WHL with 15 goals. He trails only Lynden McCallum of the Brandon Wheat Kings, who finished the East Division campaign with 21 goals. With 24 points (15G-9A) to his credit, Beckman leads the Chiefs in scoring.

Selected by the Minnesota Wild in the third round (75th overall) of the 2019 NHL Draft, Beckman signed his NHL entry-level contract on March 23, 2020. The signing followed a tremendous 2019-20 season for Beckman, in which he registered 107 points (48G-59A) in 63 games en route to being presented with the Four Broncos Memorial Trophy as WHL Player of the Year and the Bob Clarke Trophy as WHL Top Scorer. He was also named to the WHL Western Conference First All-Star Team.

Originally selected by the Chiefs in the fifth round (96th overall) of the 2016 WHL Draft, Beckman has skated in 149 career WHL regular season contests, collecting 193 points (95G-98A) along the way. He has added another 12 points (8G-4A) in 15 career WHL post-season outings.

Beckman and the Chiefs return to action on Tuesday, May 4 at 6:10 p.m. PT when they host the Tri-City Americans.