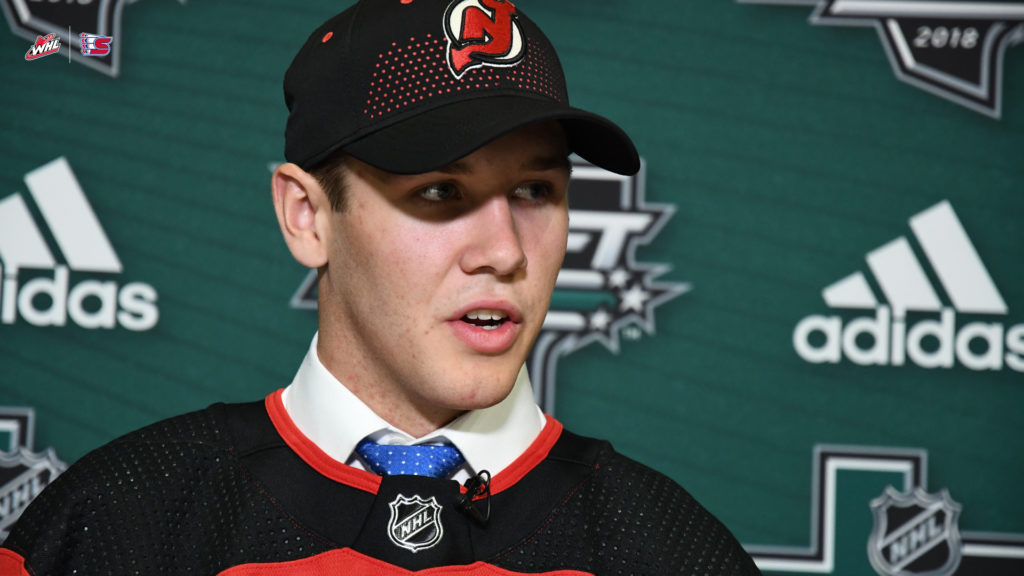 The 5-foot-10, 170-pound product of Lloydminster, Alta. was selected by the Devils in the first round 17th overall at the 2018 NHL Draft in Dallas, Texas. Smith was the top Western Hockey League player selected after consistently leading all draft-eligible WHL players in NHL Central Scouting rankings throughout the season.

The 18-year-old Smith was selected first overall at the 2015 WHL Bantam Draft by the Chiefs and has steadily improved his game since.

Making his WHL debut in January 2016, Smith recorded a pair of assists in his first two games in the league. In his rookie campaign, the 2016-17 season, Smith tallied 32 points (5G-27A) in 66 games, adding a pair of power-play goals and two game-winning goals.

This season, Smith finished second in scoring among defencemen with 73 points (14G-59A) in 69 games, adding three power-play goals and four game-winning goals. His season included a seven-point game against the Prince George Cougars on February 23, 2018. His two goals and five assists in the 9-2 win broke a 32-year-old franchise record for points in a single game.

In addition to excelling on the ice, Smith has excelled in the classroom. At the 2018 WHL Awards, Smith was named the recipient of the Daryl K. (Doc) Seaman Trophy as the 2017-18 WHL Scholastic Player of the Year. Smith was also named a Western Conference First Team All-Star.

Smith has also quickly become a familiar face on the international hockey scene as well. Smith first represented Canada at the Youth Olympic Games in 2015, winning silver and captaining the squad. At the 2017 World U17 Hockey Challenge, Smith captained Canada Black to a silver medal and was named to the tournament’s all-star team. Later that year, Smith was part of a Canadian group that won gold at the 2017 Ivan Hlinka Memorial tournament.

The Chiefs will return to the ice Friday, August 31 (3:00 p.m. PT) when they host the Portland Winterhawks in their first game of the 2018 WHL pre-season.

OFFICIAL 📄✍️: Defenseman @_tysmith_24 has inked a three-year deal with the #NJDevils! https://t.co/DMwuk2vh3v