Chiefs’ Beckman named WHL On the Run Player of the Week 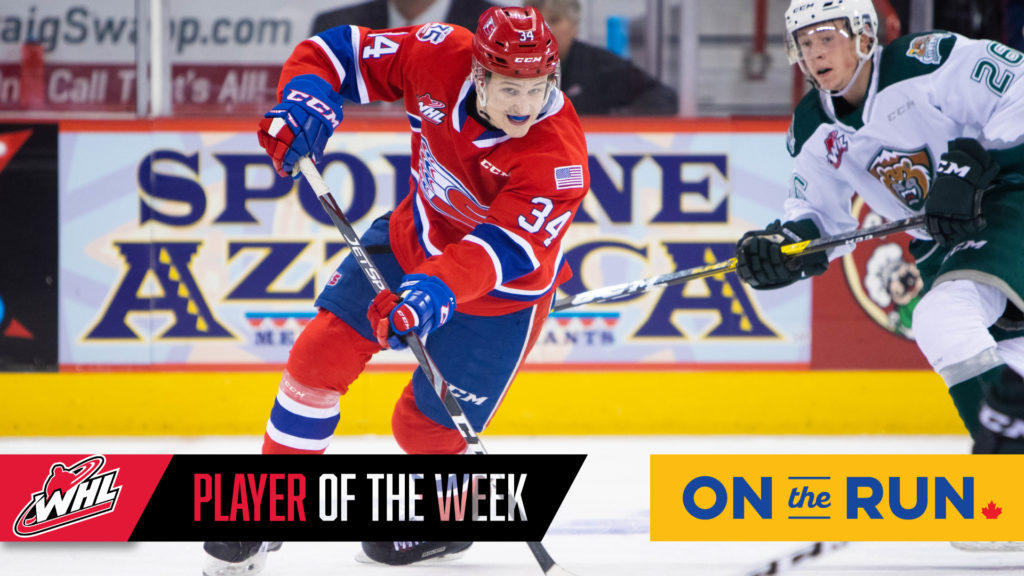 Calgary, Alta. – The Western Hockey League announced today that Spokane Chiefs forward Adam Beckman has been named the WHL On the Run Player of the Week for the week ending December 15, 2019.

The Minnesota Wild prospect recorded nine points (6G-3A) and a plus-two rating in three games as the Chiefs earned five of a possible six points from their week of action.

Beckman began his week with a pair of goals as part of a three-point night in a 4-2 win over the Seattle Thunderbirds. Beckman scored the first and fourth goals of the game for the Chiefs, also assisting on their second goal. For his efforts, Beckman was named the first star of the game.

In a Saturday rematch against the Thunderbirds, Beckman recorded a hat trick and a five-point night in a 5-2 win for the visiting Chiefs. Beckman scored his team’s first three goals, adding assists on their fourth and fifth goals. He was named the first star of the game, the WHL’s first star of the night, and the CHL Player of the Night. Sunday, Beckman closed out his week with a goal in regulation and a goal in the shootout during a 4-3 loss to the Everett Silvertips.

The 6-foot-1, 174-pound product of Saskatoon, Sask. has taken has game to another level in his second full season in the WHL. Through 30 games, the 18-year-old has recorded 49 points (20G-29A), including seven power-play goals, one short-handed goal, and two game-winning goals. Those figures have Beckman ranked third in WHL scoring, fourth in assists, and tied for fifth in goals. Last month, Beckman represented Team WHL at the 2019 CIBC Canada Russia Series, returning to his hometown as part of the event.

Spokane originally selected Beckman in the fifth round, 96th overall, of the 2016 WHL Bantam Draft. To date, Beckman has appeared in 99 WHL regular season games, posting 111 points (52G-59A), including 15 power-play goals, one short-handed goal, and four game-winning goals. At the 2019 NHL Draft, the Wild selected Beckman in the third round, 75th overall.

Beckman and the Chiefs play two more games before departing for the holiday break. They’ll head to Vancouver Island for a pair of contests against the Victoria Royals beginning Tuesday, December 17 (7:05 p.m. PT).