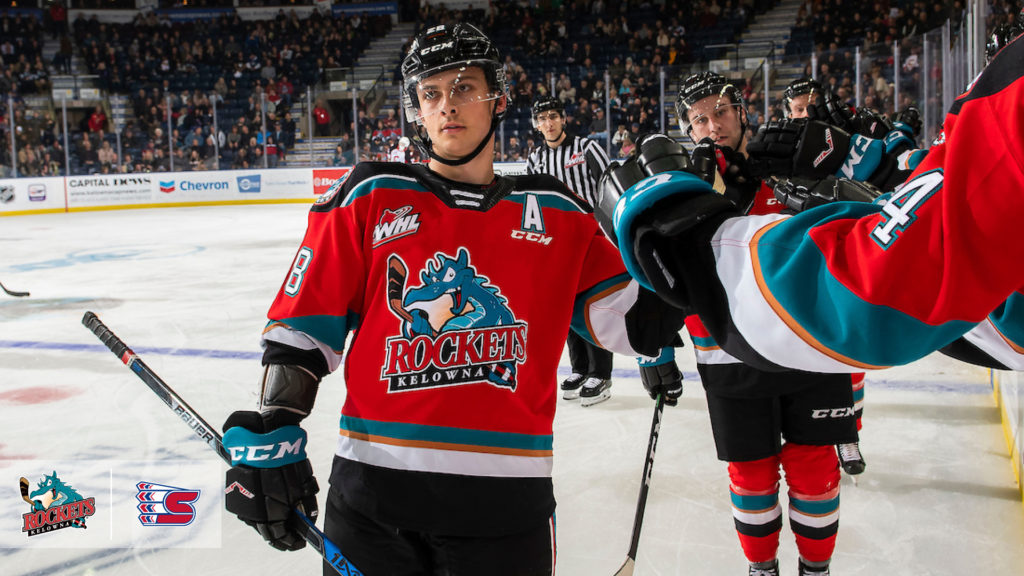 The Kelowna Rockets made a second trade Thursday in order to fulfill their overage situation, sending forward Leif Mattson to the Spokane Chiefs.

In exchange, the Rockets acquired a third-round selection in the 2020 Western Hockey League Bantam Draft.

“This is an opportunity to add a high-caliber proven scorer to our roster,” said Chiefs’ general manager Scott Carter. “Leif has shown that he can make a big impact in our league and also proven to be a strong leader in the community.

“We’re very excited to welcome him to the Chiefs family.”

With Thursday’s acquisition of Matthew Wedman from the Seattle Thunderbirds, the Rockets needed to move out another overage player. The move leaves the Rockets with Wedman, Jadon Joseph, and Carson Sass on their active roster. Overage forward Kyle Topping is currently listed on the WHL Weekly Report with a lower-body injury. His timeline stands at eight-to-14 weeks as of publishing of the report on December 3, 2019.

In Mattson, the Chiefs gain a quality scorer. The 6-foot-1, 195-pound product of Stonewall, Man. had 18 points (5G-13A) in 25 games with the Rockets during the 2019-20 WHL Regular Season, including one short-handed goal and one game-winning goal.

Mattson has also appeared in 14 WHL playoff games with the Rockets.

“Anytime you make a move with overages, unfortunately, someone is moving,” said Rockets’ general manager Bruce Hamilton. “Leif has been a great player for us, he competed hard and is a solid person. We’ve made a move that I think will be good for him, he’ll fit in well in Spokane.

“I think if there’s a place to go, this is a great place, he’s going to slot right into their top-six. We want to thank Leif for everything he has done for the Rockets and wish him well in the future. Spokane’s pick in the draft is actually Regina’s, there’s a chance that it will be an early third-round pick that will help us significantly.”

In a corresponding move, the Chiefs announced they placed 20-year-old forward Baron Thompson on waivers. The Lakeville, Minn. product had appeared in 10 games with the Chiefs this season. Originally selected by the Victoria Royals in the third round, 56th overall, of the 2014 WHL Bantam Draft, Thompson has appeared in 182 WHL regular season games with the Wheat Kings and Chiefs, posting 50 points (24G-26A), including four power-play goals and five game-winning goals. Thompson has also appeared in 10 WHL playoff games.

The Chiefs will take to the ice next on Friday, December 6 (7:30 p.m. PT) when they match up against the Vancouver Giants at the Langley Events Centre. 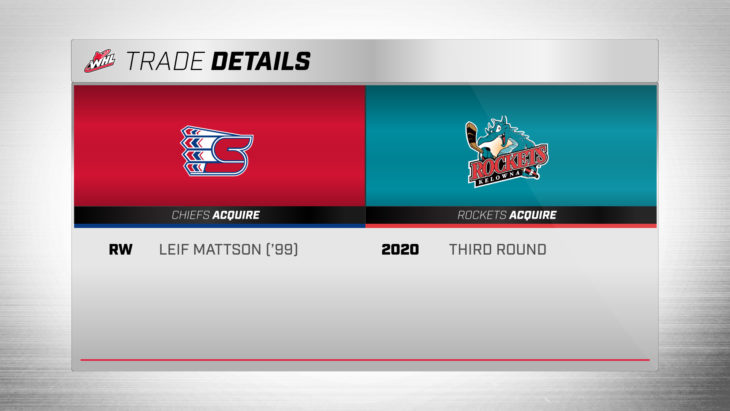 Attention fellow nighthawks, we have two trades to announce!

We've acquired Matthew Wedman from the @SeattleTbirds and also sent Leif Mattson to the @spokanechiefs.

Jake Neighbours
#GrowStronger with Kubota Canada & the CHL
6 days ago