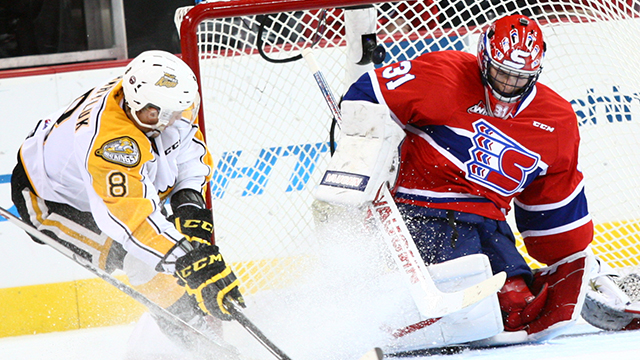 Tyson Verhelst has had a change of heart and he’s getting a fresh start to go with it.

The 19-year-old goaltender, who had announced his retirement from hockey earlier this spring, was traded along with a third round pick (2017) from the Spokane Chiefs to the Red Deer Rebels Wednesday, with Dawson Weatherill and a fifth round pick (2018) heading south of the border in exchange.

“We were in a situation where we had a goalie who was on the suspended list in Verhelst and we wanted to clear that up,” said Scott Carter, general manager of the Chiefs, in a team release. “The best option for us involved taking another goalie in return, as we feel that this is an important position for us. We want competition and players pushing each other. Dawson has some big upside moving forward.”

At the conclusion of the 2015-16 season, the veteran of 81 WHL regular season games announced he was retiring. The Chiefs went out and acquired 20-year-old Jayden Sittler to work in tandem with youngster Matt Berlin.

Would like to thank @spokanechiefs for a great 2 years. Excited for the opportunity for a fresh start with @Rebelshockey.

This marks the second deal in recent days for Sutter. On Saturday, he sent 1998-born forward Taden Rattie to the Vancouver Giants in exchange for a sixth round pick at the 2017 WHL Bantam Draft.

It’s also the second trade by Carter this week as he shipped 20-year-old Austrian import Dominic Zwerger to the Everett Silvertips in exchange for a third round pick at the 2017 WHL Bantam Draft.

The Rebels return to action on Friday (7 p.m. CST), when they visit the Moose Jaw Warriors. Next action for the Spokane Chiefs is Saturday (7:05 p.m. PST) when the Tri-City Americans visit the Spokane Veterans Memorial Arena.