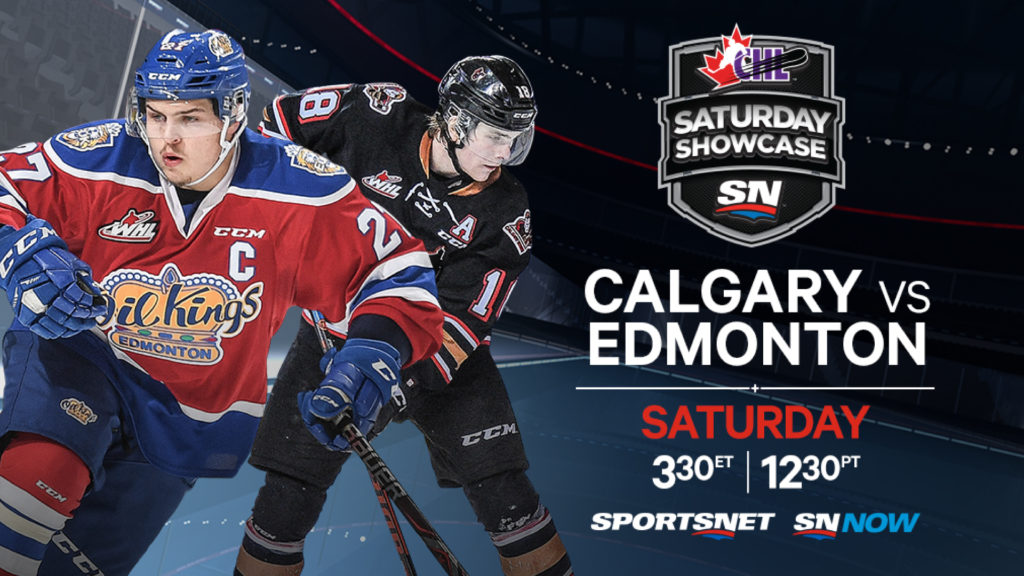 Fans in Edmonton will get a double dose of the The Battle of Alberta Saturday as the Calgary Hitmen and Edmonton Oil Kings clash at Rogers Place in an important Central Division battle as part of the Saturday Showcase of Sportsnet!

The 2018-19 Western Hockey League Regular Season has sparked a whirlwind turnaround for both Central Division clubs in Saturday’s battle as they both turned longer off-seasons into a strong two-thirds of this season.

One of those teams is the Hitmen, who were victorious in the Saturday Showcase two weeks ago against the Medicine Hat Tigers and will be looking for another win on the big stage. With 26 games left in their portion of the 2018-19 WHL Regular Season, they’re poised to win 30 games in a season for the seventh time in the past eight seasons.

Before a loss to the top-ranked Prince Albert Raiders last weekend, the Hitmen had won six-straight games, working themselves into the wild card spot. They’ve done the score-by-committee approach as well as they’re the only Eastern Conference team to not have a player inside the Top 20 of league scoring. Captain and 2019 NHL Draft prospect Mark Kastelic ranks 22nd, one point away from joining that list.

For the Edmonton Oil Kings, Saturday’s game will mark the first of 17 RE/MAX WHL Suits Up with Don Cherry to Promote Organ Donation games. Wearing white polka-dotted jerseys, in a homage to the hockey legend himself, the Oil Kings have the decided style advantage when it comes to Saturday’s matchup.

This year, players will sport uniforms emblazoned with fun nicknames as opposed to traditional surnames across their shoulders. Fans will have the opportunity to bid on the limited-edition jerseys, with 100 per cent of the proceeds going to local chapters of the Kidney Foundation of Canada. In addition to game-worn uniforms, fans will have the chance to bid on one Don Cherry-autographed jersey in each participating WHL market.

During the 2017-18 WHL Regular Season, participating WHL Clubs came together with RE/MAX to raise over $265,500, representing the largest public awareness and fundraising campaign in the history of the Kidney Foundation of Canada.

Led by their respective captains in Trey Fix-Wolansky (Columbus Blue Jackets) and Kastelic, the focus will ultimately rest gaining two points in the standings. Watch the Oil Kings and Hitmen battle it out from Rogers Place on Sportsnet’s Saturday Showcase and see where greatness begins!

-The Edmonton Oil Kings have won two-straight games against the Hitmen at Rogers Place and are 6-3-1-0 against the Hitmen in the last 10 regular season games in the Alberta capital
-Henrik Samuelsson was the last Oil Kings player to surpass 90 points in a single season, doing so in the 2013-14 WHL Regular Season. Fix-Wolansky could pull off that feat this year, sitting at 76 points (25G-51A) with 22 games to go
-Both teams will be without their top scorers from the season series. A deal at the WHL Trade Deadline sent Brett Kemp from the Oil Kings to the Medicine Hat Tigers while Jake Kryski is listed as out indefinitely on the WHL Weekly Report. After those two, Five assists in four games from Hitmen defenceman Egor Zamula (Philadelphia Flyers) rank as the next-best point total from either club
-It’s been five seasons since the Hitmen and Oil Kings last faced each other in the WHL Playoffs, but that situation could present itself once again this spring. The Oil Kings won the last meeting in seven games in the Eastern Conference Championship. Before that, the only other meeting was a four-game sweep in favour of the Hitmen in the 2009 WHL Playoffs
-Hitmen captain Mark Kastelic currently sits at 29 goals, leading all Central Division skaters. Brandon Hagel (Chicago Blackhawks) of the Red Deer Rebels is the next closest at 26.
-Of the Hitmen’s final 26 games, 14 are against the Central Division, including a home-and-home series against the Oil Kings on the final weekend of the regular season.
-Just 10 of the Oil Kings’ final 22 games will be against the Central Division, but their final five games of the regular season will all come within their division.
-The acquisitions of James Malm and Andrew Fyten appear to be working out for the Hitmen and Oil Kings respectively. Malm has 28 points (7G-21A) in 27 games with Calgary while Fyten has 10 points (3G-7A) in 12 games with Edmonton, including a pair of game-winning goals
-Fyten will take on his former team and former teammate Kaden Elder once again. Elder is nine games shy of 300 for his WHL career.
-Edmonton’s Vince Loschiavo is four games shy of 300 for his WHL career
-Oil Kings defenceman Conner McDonald is two points shy of 100 for his WHL career

Join us this weekend for #SaturdayShowcase action on @Sportsnet!

Check out these fresh threads for your #OilKings WHL Suits Up with Don Cherry game this Saturday!!#thumbsup #allhail pic.twitter.com/3WRmJ8Da1q 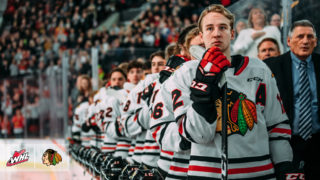 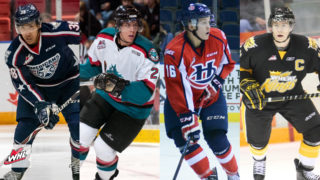 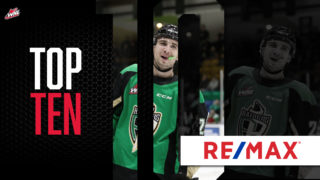 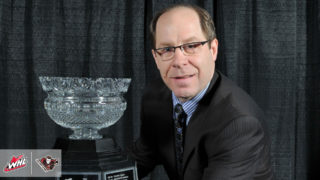 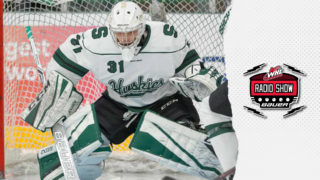