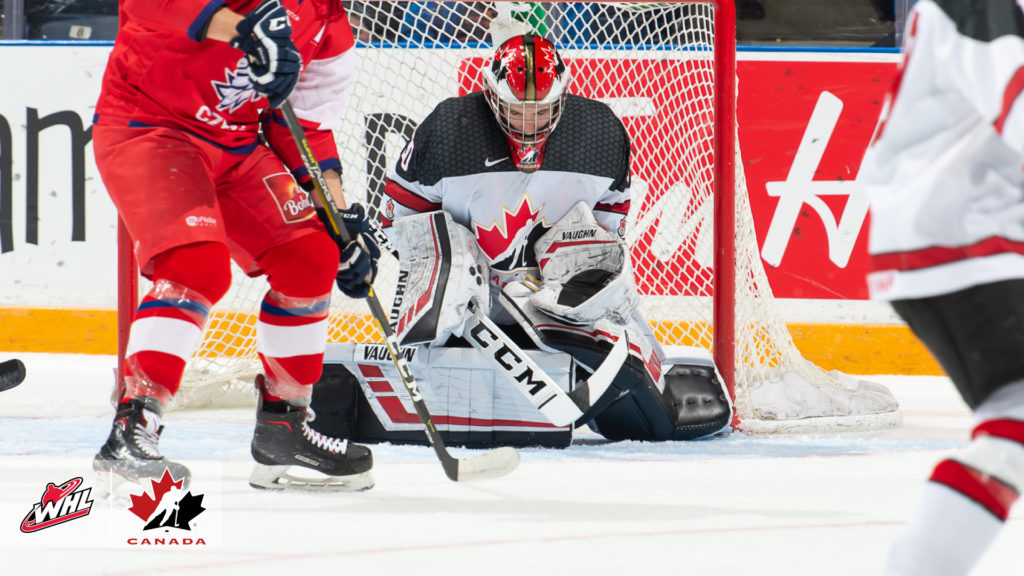 Tuesday action at the 2019 World Under-17 Hockey Challenge saw the round-robin portion of the tournament come to an end. Tuesday’s action also saw victories for all their Canadian teams at the tournament. In the lone non-Canadian game of the day, Russia defeated Sweden by a 5-4 final in Swift Current.

A tight battle between Canada Black and the United States spilled into overtime Tuesday at the 2019 World Under-17 Hockey Challenge, with Canada scoring 3:20 into the extra period to earn the victory in Medicine Hat.

The teams remained tied after each period in regulation as they each scored once in the first, twice in the second, and once in the third. Victoria Royals defenceman Nolan Bentham picked up his second assist at the tournament on Canada’s goal in the first.

As Canada scored to go up 2-1 in the second period, Calgary Hitmen forward Sean Tschigerl and Red Deer Rebels forward Jayden Grubbe picked up the helpers.

The overtime win gave Canada an 0-3-0-0 record at the tournament, placing them second in Group A.

Canada Red put on an offensive clinic against Finland in their round-robin finale, earning a 7-2 victory in Swift Current.

The win helped Canada Red finish the round robin with a 2-0-1-0 record, good for second in Group B.

Prince George Cougars goaltender Tyler Brennan stopped all 23 shots sent his way in a 3-0 shutout for Canada White over the Czech Republic.

Canada scored once in each period with Edmonton Oil Kings forward Dylan Guenther scoring a short-handed goal in the first period and a power-play goal in the second. Medicine Hat Tigers forward Cole Sillinger scored Canada’s third goal of the game.

Brennan stopped nine shots in the first, three in the second, and 11 in the third. The shutout was the first by any goaltender at the 2019 edition of the tournament.

With the win, Canada White finished with a 1-1-0-1 record in the round robin, placing third in Group A.

Sillinger wrapped up the round-robin portion of the tournament with five goals to lead all skaters. Savoie recorded four assists to lead a group of four skaters in the assist lead.

Between the pipes, Milic’s 2.50 goals-against average ranked him first among all other goaltenders at the tournament. Brennan ranked third with a 2.98 GAA. On the save percentage side, Milic ranked second among all goaltenders through round-robin action with a 0.931 SV%.

All eight teams will be in action at the tournament Thursday with spots in Friday’s semifinals on the line.

The two quarter-final matchups to not involve a Canadian team are the early games Thursday, with the United States hosting Finland and Sweden host Czech Republic.