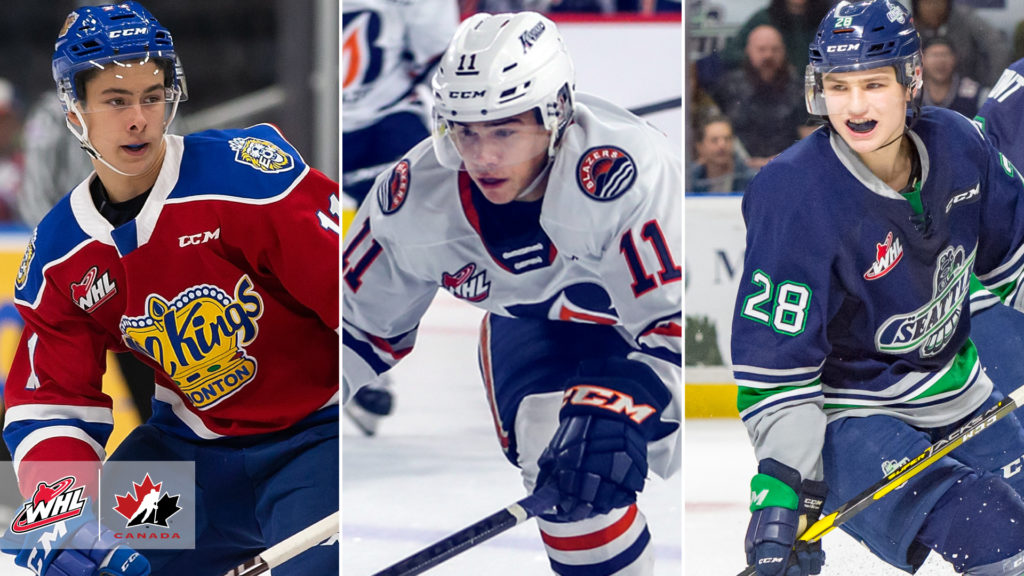 With tournament action set to kick off in less than two weeks, the three teams will match up against the Czech Republic, Finland, Russia, Sweden and the United States as they compete for a gold medal.

Western Hockey League Players at the 2019 World Under-17 Hockey Challenge:

Canada Black (4)
Highly touted 2018 WHL Bantam Draft selections, Jayden Grubbe of the Red Deer Rebels, Sean Tschigerl of the Calgary Hitmen and Kai Uchacz of the Seattle Thunderbirds will be relied on heavily for Canada Black’s offensive needs. Nolan Bentham of the Victoria Royals also looks strong defensively in his first few WHL games and will be expected to continue his efforts for Canada Black.

Canada Red (6)
As the highest-placing Canadian team from last year’s tournament, Canada Red will look to improve on their four-place finish. Of the three Canadian teams, Canada Red holds the highest number of defencemen in that of first-round 2018 WHL Bantam Draft selections Nolan Allan of the Prince Albert Raiders, Kyle Masters of the Rebels, and Olen Zellweger of the Everett Silvertips. Forwards Logan Stankoven of the Kamloops Blazers and Conner Roulette of Seattle have also put on strong showings in their first few WHL games, recording one multi-point game each. While he has yet to make his WHL debut yet, Thunderbirds’ prospect Thomas Milic looks ready to step up his game after registering a 1.21 goals-against average and a .957 save percentage in five games with the Canadian Sports School Hockey League’s (CSSHL) Burnaby Winter Club Prep.

Canada White (6)
Three talented forwards in Cole Sillinger of the Medicine Hat Tigers, Dylan Guenther of the Edmonton Oil Kings and Matthew Savoie of the Winnipeg ICE will make Canada White a difficult team to stop at this year’s tournament. Defensive prospects Carson Lambos of the ICE and Graham Sward of the Spokane Chiefs will also be tough to get around. Posting a 1.11 GAA and a .950 SV% in his two games with the Prince George Cougars this season, Tyler Brennan has done well with WHL-level competition and will look to continue his success for Canada White.

“After an exciting summer camp with 112 players gathering in Calgary and the selection of our 66-player roster last week, the unveiling of our three teams is one of the final stages as we prepare for the World Under-17 Hockey Challenge,” McEwen said. “We are fortunate to be able to assemble three competitive and skilled teams and we believe all 66 players will represent their country with pride in this prestigious event.”

Team Canada Black, Team Canada White, the Czech Republic and the United States will play their Group A preliminary-round games at the Canalta Centre in Medicine Hat, while Team Canada Red, Finland, Russia and Sweden will play Group B games at Innovation Credit Union iPlex in Swift Current. Quarter-finals and semifinals will be played at both venues, while placement games will be held in Swift Current and the bronze and gold medal games will be held in Medicine Hat.

TSN and RDS, the official broadcast partners of Hockey Canada, will air the semifinal in Medicine Hat on Friday, November 8, as well as the bronze and gold medal games on Saturday, November 9; please check local listings for details. Media accreditation for the 2019 World Under-17 Hockey Challenge can be requested online.

Prior to the start of play, the teams will take to the ice for pre-tournament games on Thursday, October 31 (7 p.m. MT). Team Canada Black will match up against Finland at the Crescent Point Wickenheiser Centre in Shaunavon, Sask., Sweden will play the Czech Republic at the Centennial Regional Arena in Brooks, Alta., Team Canada White will face off against Russia at the Innovation Credit Union iPlex in Swift Current and Team Canada Red will meet the United States at the Canalta Centre in Medicine Hat.

Fans looking to secure their seats for the 2019 World Under-17 Hockey Challenge can purchase a Medicine Hat or Swift Current ticket package, as well as single-game tickets for as low as $13, at HockeyCanada.ca/Tickets.

Medicine Hat and Swift Current will receive the net proceeds from all ticket sales as a legacy of the event to support grassroots hockey within the communities. Additionally, recent editions of the World Under-17 Hockey Challenge have resulted in as much as $6 million in economic impact within the host communities.