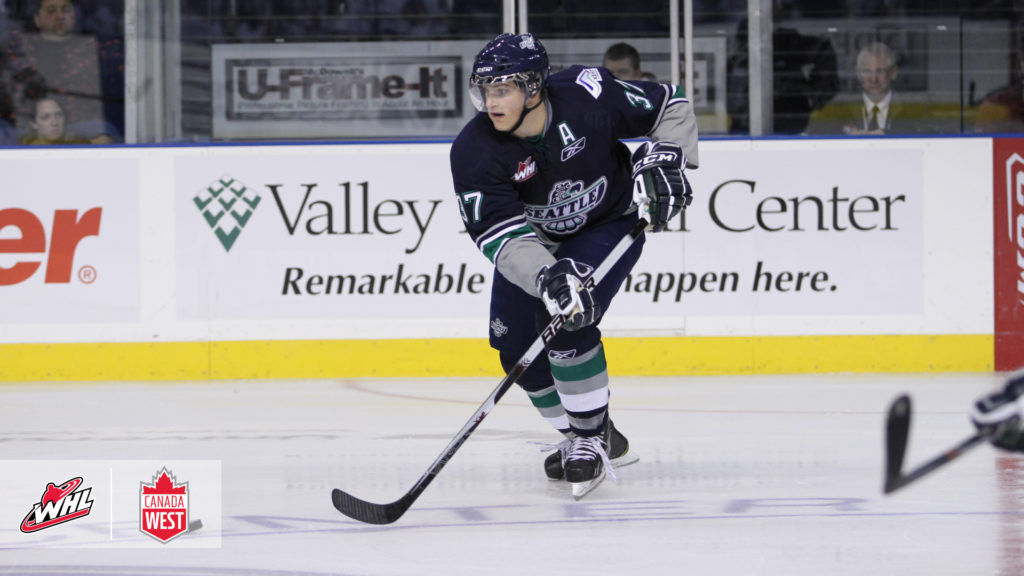 “I don’t think that I was a favourite among officials,” laughed the University of Alberta grad and former men’s hockey player. “If you look at my penalty minutes from my Golden Bears days, I’m not sure there are many guys that had more penalty minutes than I did.”

Toomey, who played four full seasons in the Western Hockey League before moving to the U of A, has traded his stick for a whistle, working upwards of a dozen games each month as a linesman in the Alberta Junior Hockey League, WHL, American Hockey League, and, yes, Canada West.

In fact, he’s even done a few games this season at Clare Drake Arena – the rink he called home for four seasons as a Golden Bears forward.

“My schedule’s been pretty busy and that’s good because I want to get the experience and I love being back in the game,” said the Leduc, Alta. native, who works full-time as a program coordinator and senior instructor with Serdachny Power Skating and Hockey, based in Edmonton.

In just a year and a half since first donning the officials’ stripes, Toomey has quickly ascended the officiating ranks and was one of less than 100 officials who attended the NHL Exposure Combine in Buffalo last summer.

Even the most experienced referees who can practically envision a play before it happens, couldn’t have seen this coming.

“It’s not anything that crossed my mind while I was a player,” said Toomey, who turns 29 in March. “I am very happy that I have found my way into it now a number of years after my playing career ended.”

He’s been able to draw heavily on his playing experience – nearly 300 combined regular season and playoff games in the WHL with the Saskatoon Blades and Seattle Thunderbirds, and over 100 games with the Golden Bears.

“My understanding of situations from a players’ standpoint, being in their skates previously, has allowed me to maybe know what to say or at least understand what they’re feeling and when you can acknowledge that with a player from an official’s side of things, that goes a long way in at least letting everyone know that we’re all on the same page,” Toomey said.

“Players and coaches have bias – they want to win and calls to go their way. It’s the official’s job to see the play and be in an unbiased position to make the proper call, and we’re out there to serve the game, that’s our purpose as officials – to make sure the game is played with integrity and safety.”

The 6-foot-4, 210-pound Toomey certainly was someone the referees were familiar with. He racked up at least 90 penalty minutes four times in the WHL, but also earned 121 (63G-58A) points during his career. With the Golden Bears, he was twice the most penalized player and accumulated 28 points (16G-12A).

Toomey made his major junior debut with the Blades in 2005-06, and played parts of five seasons in Saskatoon, before finishing his WHL career in Seattle in 2009-10.

Through the WHL scholarship program, for every season played in the WHL a player is entitled to a minimum of tuition, books and compulsory fees at any post-secondary institution. For Toomey, the decision of where to attend university was an easy one.

“I knew I wanted to go to the University of Alberta,” said Toomey, whose father Jim was a linebacker for the Golden Bears football team from 1988 to 1991. “There wasn’t really a question in mind … that I was going to wear green and gold, just like he did. We both have our Block A sweaters (awarded to Alberta student-athletes) at home now and I’m very proud to have followed in his footsteps there.”

During his time at the U of A, Toomey was a part of three Canada West championship teams and helped the Bears capture back-to-back U Sports men’s hockey titles in 2014 and 2015.

“Going through those four years with so many of the same guys, every one of them was there to accomplish the same goal to win a national championship and there were no ulterior motives,” Toomey said. “The friendships that we had in the dressing room was something that I never saw and have yet to see in any dressing room that I’ve been a part of since.”

While still in junior, Toomey attended Serdachny camps in an effort to improve his skating. He eventually turned what was the weakest part of his game into a strength, so much so that he started working as an instructor for Serdachny during the summers. He continued each year through university until graduating in 2015 and joining the company full-time.

“We run a three-on-three program with the City of Edmonton, and I was officiating it, and a couple of guys I worked with were like, ‘Man, you look really good doing that, you should consider maybe doing this,'” recalled Toomey.

He laughed at first, but then received like advice from a friend who told him they were looking to ex-players for recruits. Toomey decided to go for it and began doing everything he could to learn the craft, reading rule books, watching video, and attending games to observe officials.

After earning his certification, Toomey started getting assignments from the North Zone Referee’s Committee in fall 2017, his first game being bantam AAA girls. More opportunities came, and before long he was working games at increasingly higher levels.

“I was lucky there were a lot of people along the way that were willing to help me and recognized that I had a skill set and an opportunity the way that officiating has been finding recruits,” said Toomey, who cites his skating ability as his biggest asset in officiating. “I’m very grateful for all the people who’ve helped me along the way so far.”

Toomey has now worked more than half a dozen games] times in the AHL, his first exposure to the professional ranks, as he aspires to further his officiating career. The linesman is eager to work playoff action in the weeks ahead, perhaps even in his old Canada West stomping grounds.

“Once I started reffing, I just loved the feeling of being back on the ice … being in the game, being in the battles, those are the things that really captivated me,” he said. “It’s just been an excellent ride and an excellent experience to date.”