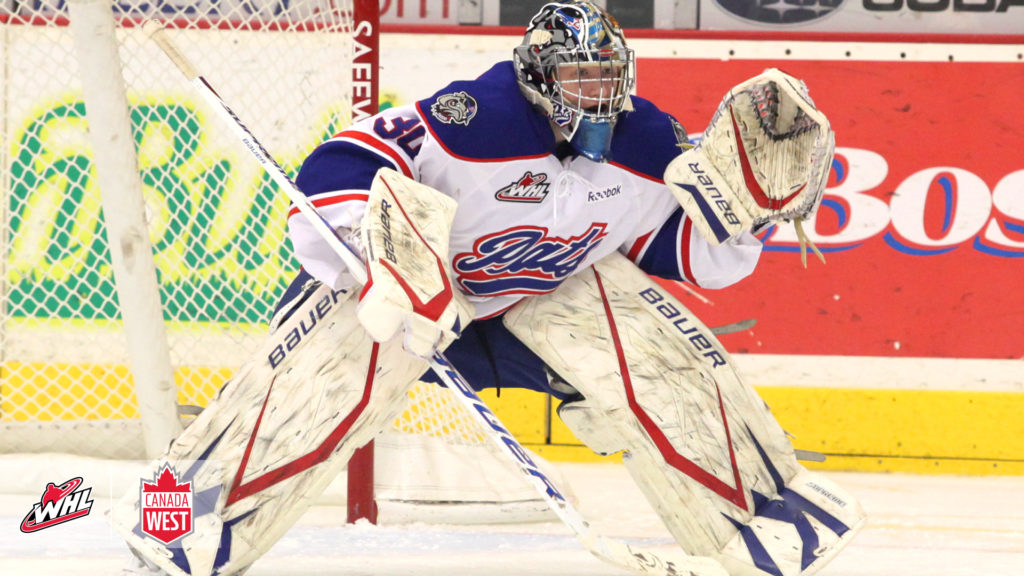 In less than a year, he’s already been Down Under, to Europe, and in America’s heartland. Matt Hewitt’s professional hockey itinerary is looking like the back of a concert t-shirt for U2 or the Rolling Stones.

There currently aren’t any dates booked in NHL arenas. He did that show on a previous tour – just not as the headlining act.

“That’s what I usually tell people. I’m like, ah, I’ve already been there,” Hewitt says with a laugh.

The UBC student-athlete, who became a celebrity for a day in October 2016 when he was called upon as an emergency backup goalie for the Vancouver Canucks, is now embarking on a career in the pros.

Hewitt, who played with the Regina Pats in the Western Hockey League before attending university, has spent his rookie year with clubs in Australia and Italy before recently signing with the Wichita Thunder of the ECHL.

“I think I have adjusted well,” the UBC sociology grad says. “The experiences of school and the Canucks and the WHL and everything that’s led up to this point in my career has made me the person I am today.”

Hewitt was eligible to take advantage of the WHL Scholarship Program, for which every season played in the WHL, a player is entitled to a minimum of tuition, books and compulsory fees at any post-secondary institution.  Malcolm Cameron, an assistant coach with the Pats, suggested Hewitt consider UBC, and after upgrading his marks through summer school, he enrolled in 2013 at the Vancouver-based school where he would play for the T-Birds men’s hockey team.

“Growing up, in high school everyone was talking about getting into the University of British Columbia, and how you had to have high grades, and I remember thinking to myself, ‘I’ll never get into UBC, that’s such a far-fetched (idea),’” he says. “I never pictured myself being in a school like UBC and it’s funny how things work out. One of the cool things about (hockey) is I ended up where I never expected to even be.”

Hewitt was early in his fourth year of university when a series of events left the Canucks without a second goaltender for their game that night against the St. Louis Blues. In desperate straits, they put the call out to Hewitt, who had regularly served as a practice goalie for the NHL team.

“When I got the call, it came out of nowhere, it definitely threw me off,” says Hewitt, who took shots in pre-game warm-up, sat in the locker room while coach Willie Desjardins went over strategy, and had the best seat in the house on the Canucks bench when Henrik Sedin scored in overtime to send the 17,000-plus fans at Rogers Arena home happy.

“It was an excitement and a thrill … it opened my eyes and made me realize, yeah, I want to give playing pro hockey a shot after school and that there was an opportunity,” he continues.

“Getting to practice with the Canucks or getting called to backup is like opening the door and you’re getting a little peek on what’s on the other side of the door” he says.

“You just get little looks here and there and you’re like, ‘Okay, this feel pretty good, I’m liking this, I’ll try to give this is a shot.’ I just told myself to stick out my time at school, that (the pro hockey opportunity) will be waiting for me, and fortunately I got a shot.”

That shot came not long after he graduated last spring, following a terrific five seasons with the T-Birds that concluded in 2017-18 with Hewitt going 12-5-2 and being named to the 2018 Canada West Second All-Star Team.

Hewitt joined the Canberra Brave of the Australian Ice Hockey League, the country’s first tier of ice hockey which runs from April to September. The five-foot-11 Canadian led the league with a goals against average of 1.95, was named co-MVP of the Brave, and backstopped the team to its first ever championship, the Goodall Cup.

From there, Hewitt headed to Central Europe, and found a home with HC Fassa of the Alps Hockey League. He saw action in 12 games for the Italian club, then got a call during the holiday season from his old Pats assistant, Malcolm Cameron, now head coach of the ECHL’s Thunder.

“He said ‘Hey, we’re trying to make a playoff run and could use an extra set of hands,’ because he knew me from past experience,” Hewitt says. “It’s cool to come full circle, how he told me of (UBC) and now here he is five years later, calling me to say, ‘Hey I could use you down here.’”

Hewitt signed with the Thunder on Jan. 2 and appeared in his first game with the Edmonton Oilers affiliate a week later.

His tour has taken residency in Kansas, at least momentarily. Where it goes next is anyone’s guess. Hewitt talks about attending grad school in Britain and playing in the top-flight Elite Ice Hockey League. He also has thoughts of pursuing a career in firefighting. But for the time being, he’ll go wherever there’s an over-sized jersey with his name on it.

“This is how I look at it: I did my schooling, I got my degree, I have something to fall back on. I accomplished that and did that for myself, and now it’s time for me just to go and live life. Hopefully I’ve got a lot left to put into hockey and if it takes me somewhere, I’m just going to keep riding that, but (I’ve got a degree) and I think that’s a huge thing,” he says.

“UBC allowed me to develop and mature as a person, off ice and on the ice, and has allowed me to come in (prepared to be a pro) in Italy and now in the ECHL… I’m very thankful I decided to go school.”