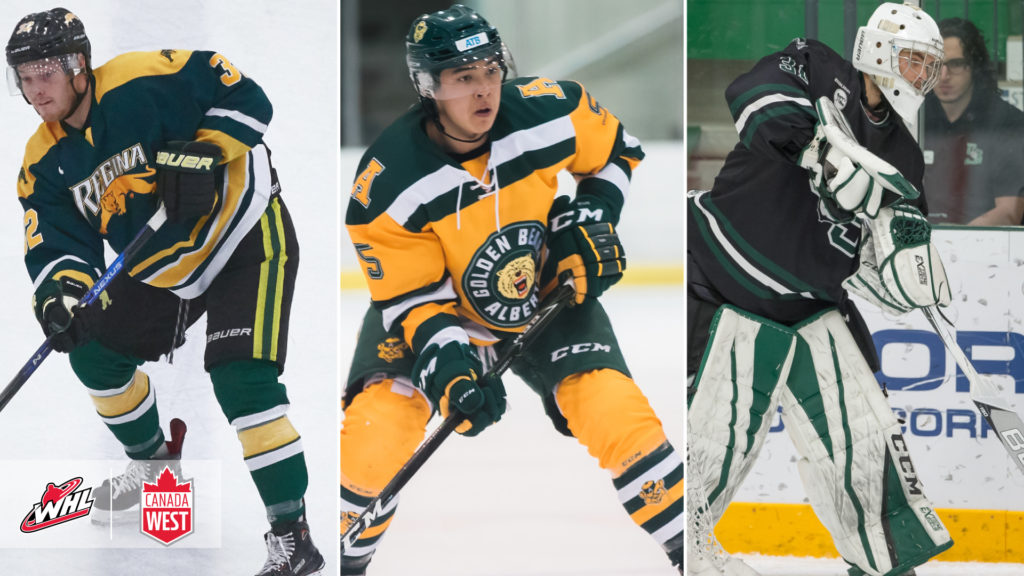 Each week during the Canada West men’s hockey season, CW and the WHL honour three WHL Grads now playing in CW. Here are the CW-WHL three stars for the weekend of Oct. 19-20.

A veteran of nearly 300 WHL games combined between Kootenay and Lethbridge, Zak Zborosky helped the University of Regina men’s hockey team to a sweep of the Manitoba Bisons on the weekend, picking up three goals and five points in two games.

The second-year forward set up the game-winning goal on Friday night, as he and Cougar captain Tristan Frei earned assists on Arthur Miller’s second-period goal to help the Cougars get their first win of the season.

Saturday was the Zborosky show, as the Cougars fell behind 2-0 in the first period, but evened the score 2-2 after the second frame as Zborosky set up Tyler King and Brennan Riddle also found the net. The Media, Art and Performance student took over in the third period, scoring three goals in seven minutes for the natural hat trick. Regina would get an empty netter from Corwin Stevely, completing the weekend sweep and improving to 2-3-1.

Third-year Business student Jason Fram helped lead the Alberta Golden Bears to a pair of overtime victories over the Mount Royal Cougars this past weekend.

Friday night in Calgary, the former Spokane Chiefs captain posted a goal and an assist in the 4-3 win, scoring the game-winner 2:43 into overtime to give Alberta the victory.

The following night in Edmonton, Fram assisted on Alberta’s second goal of the night, which tied the game with less than 20 seconds to play in the third period. The Bears would score 3:35 into overtime to secure the 3-2 win.

Second-year Arts & Sciences student Taran Kozun wasn’t busy over the weekend, but he was unbeatable, shutting out the Lethbridge Pronghorns both nights in Saskatoon.

The former Seattle Thunderbird stopped all 13 shots he faced Friday in a 5-0 win, before stopping 12 in a 4-0 victory on Saturday night.

Kozun, who won the Del Wilson Trophy as the WHL’s top goalie back in 2014-15 while with Seattle, leads the conference in wins this season with five, as the Huskies lead the CW standings with a 5-1-0 record. 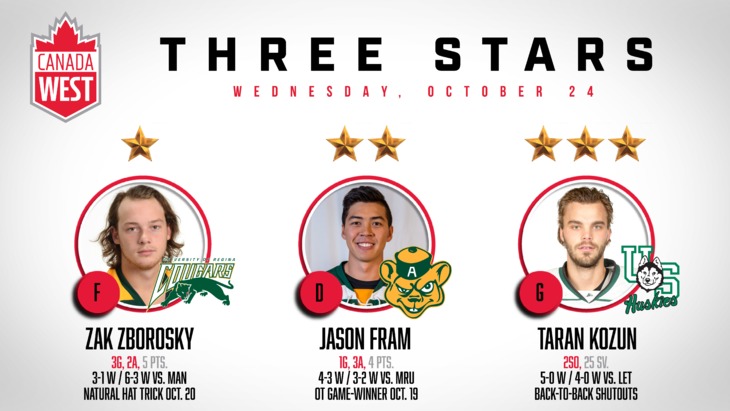