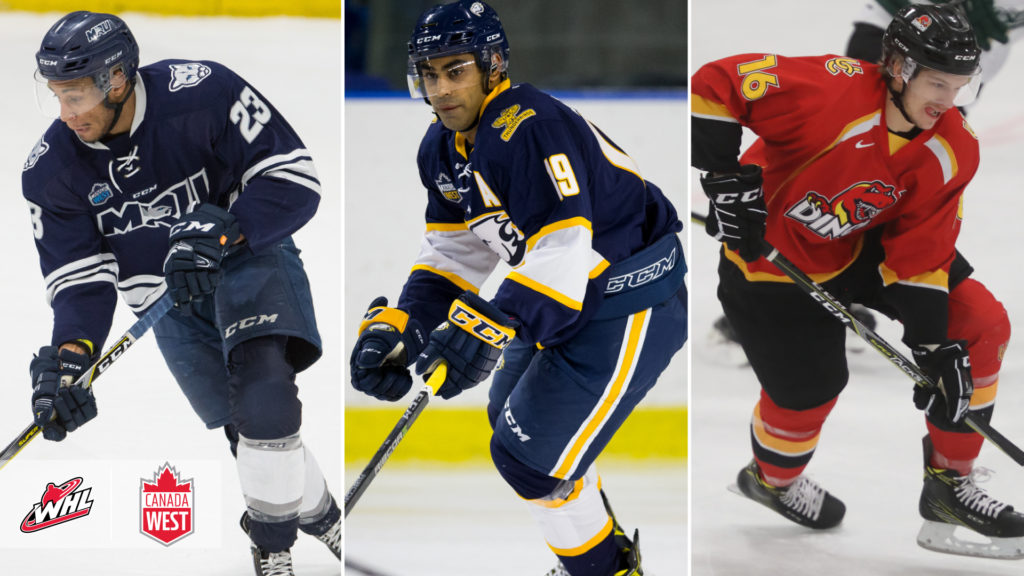 Each week during the Canada West men’s hockey season, CW and the Western Hockey League honour three WHL Grads now playing in CW. Here are the CW-WHL three stars for the weekend of February 15-17, as the conference playoffs opened with quarter-final action.

Former Swift Current Bronco Jamal Watson helped power the Mount Royal Cougars to a quarter-final win over the UBC Thunderbirds in Vancouver over the weekend.

The third-year forward combined for a goal and three assists, as MRU needed three games to get past UBC on the West Coast.

The Cougars earned a 4-2 win in Game 1 of the series, as Watson had a pair of assists in the Friday victory. A 3-1 setback Saturday in Game 2 meant a third and deciding game was needed, as the Cougars skated away with a 5-2 win in Game 3 on Sunday.

Watson is coming off a 15-point regular season campaign, and will look to carry his playoff scoring touch into this weekend’s best-of-three semifinal against the Saskatchewan Huskies.

Tyler Sandhu did his part over the weekend to keep the UBC Thunderbirds’ season alive. But despite a three-goal weekend, Sandhu’s T-Birds bowed out of the CW playoffs in three games to the Mount Royal Cougars.

The former Tri-City Americans captain netted a trio of goals over the first two games of the quarter-final series, including a pair Saturday in UBC’s 3-1 Game 2 win.

Matt Alfaro and the Calgary Dinos moved onto the second round of the CW men’s hockey playoffs over the weekend thanks to a sweep of the Lethbridge Pronghorns.

The former Lethbridge Hurricane netted a pair of goals and added an assist, as Calgary swept the ‘Horns in the conference quarter-finals.

Alfaro had a goal and an assist Friday in Calgary’s convincing 5-1 Game 1 victory, before adding a goal in the Dinos’ gritty 4-3 double-overtime win in Game 2.

Thanks to their win over the University Cup host ‘Horns, Calgary advanced to the CW semifinals. They’ll make the trek north this weekend to face the Alberta Golden Bears, with Game 1 slated for Friday night in Edmonton. 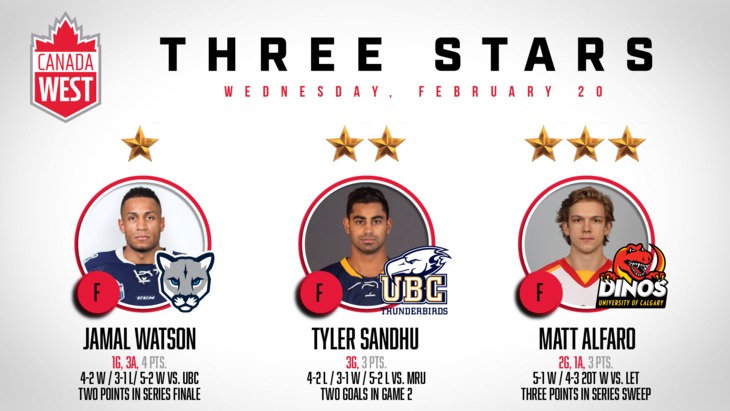