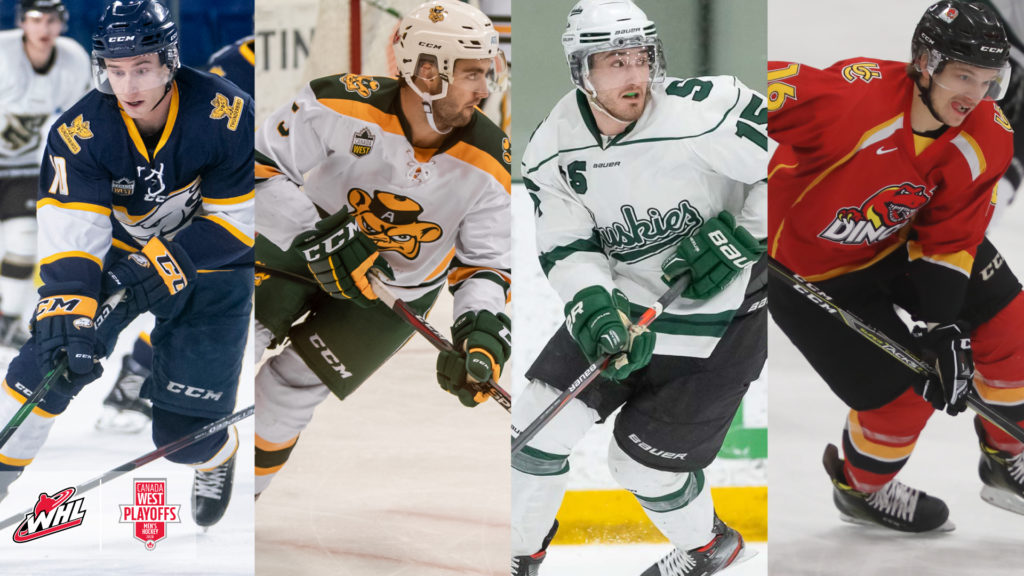 UBC Thunderbirds at U of A Golden Bears

Golden Bears Recap: The UofA Golden Bears have continued their dominance in Canada West with another impressive season. This year the Golden Bears finished as the first seed for the second time in three seasons, just edging out the Huskies. Leading the way offensively for UofA was second-year forward Grayson Pawlenchuk. The former Red Deer Rebels captain improved his offensive output this season, finishing the regular season with 35 points (18G-17A) in 28 games.

Thunderbirds Recap: Coming off an impressive weekend series victory over the Mount Royal University Cougars, the Thunderbirds proved they are a force to be reckoned with. One of the many strengths for UBC in the quarter-finals was the team’s balanced scoring depth. Former Edmonton Oil Kings forward Quinn Benjafield and former Portland Winterhawks forward Matt Revel led the way for the team with four points each over the three-game series.

One area to watch for UBC leading into the weekend series will be the performance of former Seattle Thunderbirds goaltender Rylan Toth. The goaltender won a WHL Championship in 2017 with Seattle and is no stranger to playing in big games. Look for the 23-year-old to stand tall this weekend with the challenge at hand.

WHL Alumni on the Golden Bears:

WHL Alumni on the Thunderbirds:

Huskies Recap: After finishing first last year in Canada West, the Huskies fell just short of the top spot this season. The team however has not taken any steps back with former Vancouver Giants captain Jared Dmytriw leading the way. This season, the U SPORTS rookie finished tied for fourth in Canada West scoring with 28 points (10G-18A). Dmytriw also finished tied for first in both game-winning goals with four and short-handed markers with two. Former Everett Silvertips forward Carson Stadnyk led the Huskies with 13 goals on the season. Stadnyk finished the season with 21 points (13G-8A).

The Huskies were incredibly efficient on the penalty kill this season, leading Canada West with an 86.8 per cent rating. UofS will have to keep their guard up as their opponent, the Dinos, ranked fifth on the powerplay, converting 18.4 per cent of power-play opportunities.

Dinos Recap – The Dinos will look to continue their strong play heading into their second round series after consecutive wins over the Manitoba Bisons. Leading the way for UofC in the quarter-finals was former Swift Current Broncos forward Coda Gordon. The 25-year-old notched five points (2G-3A) in the Dinos weekend sweep over the Bisons. Look for Gordon to be an impact in the second round as well as aiming to get his teammates involved.

Also aiming to leave his mark will be Matt Alfaro who led the Canada West in regular season scoring with 36 points (15G-21A). The former Lethbridge Hurricanes forward will look to be a key piece for the Dinos as they look to advance to the Canada West Finals.

WHL Alumni on the Huskies:

WHL Alumni on the Dinos: