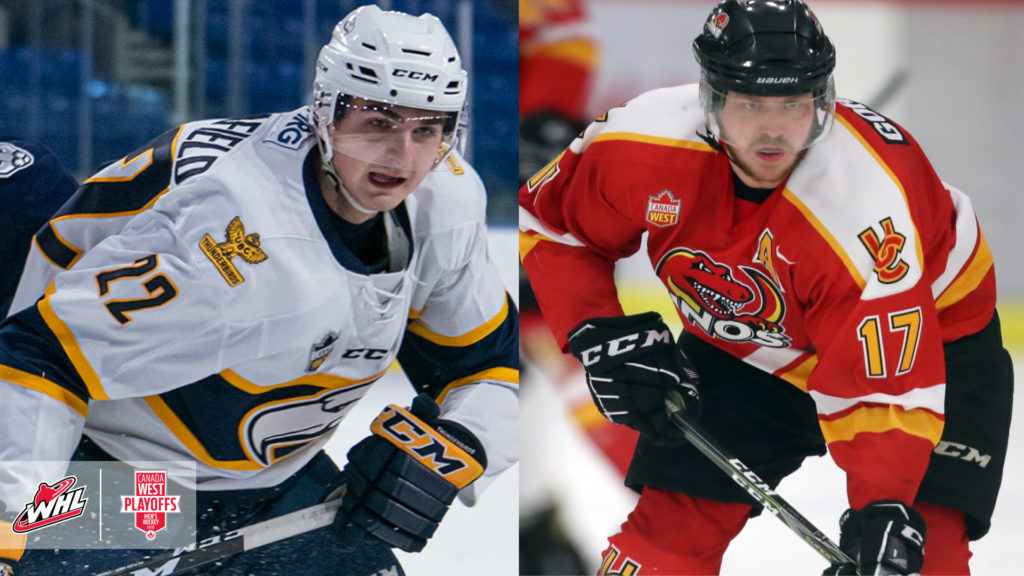 Game One recap: The Dinos opened the scoring on Friday night early after two WHL Alumni connected. Former Swift Current Broncos forward Coda Gordon found former Lethbridge Hurricanes forward Matt Alfaro in the slot, giving the Dinos the early lead. U of C would not look back after Gordon would also set up former Calgary Hitmen forward Kaden Elder on a one-touch pass, extending the lead to four for the Dinos. Gordon would link up with Elder again in the second period, finding the Hitmen alumni wide open on the edge of the left face off circle.

The Bisons however would stick around however in the third period. Former Portland Winterhawk Adam Henry walked the blueline, skated into the left-zone and ripped a rocket that popped the water-bottle of the Dinos goaltender, making it a 5-2 game. The late push would not be enough however as the Dinos would take game one by a 6-2 final. Gordan led the Dinos, finishing the night with three assists in the win.

Game Two recap: The Dinos opened the scoring again on Saturday on a short-handed marker early in the first period. After his exceptional performance the night before, Coda Gordon intercepted a pass in the Bisons zone and ripped a wrist shot blocker side on the Manitoba goaltender. The Bisons would even the game at ones after former Regina Pats forward Brady Pouteau ripped a power-play goal past the Dinos goaltender. The first-year forward’s shot beat the Dinos goaltender, glove side, and would give Manitoba a shot to take the lead for the first time in the series.

The Dinos push would be too much for Manitoba to handle as Gordon potted his second goal of the game, giving the Dinos the lead.  Calgary would fend off a late push from the Bisons to take the series in two games.

Game Two Recap: Saturday’s game was the Ryley Lindgren show as the Cougars bounced-back. Lindgren opened the game on a mission, scoring goals in the first and early second period, giving the Cougars a two goal lead.  Kehler and Benjafield continued to drive their line and kept UBC in the game after the duo linked up for a marker in the early second period. Lindgren potted his hat-trick goal, five minutes into the second period, restoring the Cougars the two-goal lead. After making the game 4-1, the Thunderbirds would close the gap with markers from former Winterhawks forward Matt Revel and Hitmen alumni Jake Kryski. Lindgren would add an empty net goal for his fourth of the game in the Cougars 5-3 win.

Game Three Recap: In the deciding third game of the series both teams put on clinical performances for a shot to face off against University of Alberta in the semi finals. UBC would open the game on back-to-back markers from Maxwell and Kryski. Medicine Hat Tigers alumni Kyle Becker extended the lead to three after burying a shot from the slot past the Cougars goaltender. Down three goals, MRU was not ready to give up easily. After making the game 4-2, an additional goal from Yaremko had the Cougars short just one. In the dying seconds of the third period, the Cougars found themselves on the powerplay. With one second left on the clock, Lindgren found Prince Albert Raiders alumni Jesse Lees for the tying goal. The Thunderbirds however would go to work on the powerplay in overtime and found the back of the net on a marker from former Vancouver Giants forward Austin Vetterl that clinched the series on a sweet back-hand marker. UBC will take on the University of Alberta Golden Bears next weekend.