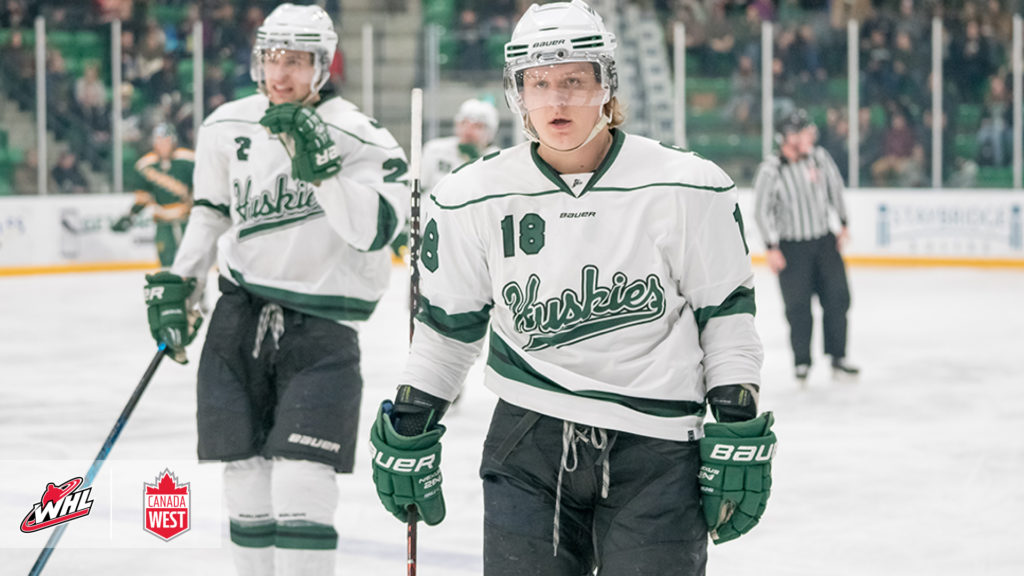 SASKATOON – The Saskatchewan Huskies took the first step to a Canada West men’s hockey banner Friday night, downing the Alberta Golden Bears 4-2 in Game 1 of the 2019 CW Final in Saskatoon.

Wyatt Johnson’s goal 7:33 into the second period proved to be the game-winner, as the Huskies landed the first blow in the best-of-three series in front of a sold-out crowd at Merlis Belsher Place.

Friday night marked the start of the fourth consecutive meeting between the storied rivals in the conference championship series, and 21st overall.

While both teams had already punched their ticket as Canada West representatives at the University Cup March 14-17 in Lethbridge, neither team entered the weekend ready to pass on conference bragging rights.

It didn’t take long for Saskatchewan to get on the scoreboard first, as Jaimen Yakubowski put the home side up 1-0 just 2:32 into the first, igniting the raucous crowd of 2,583.

Nearly 10 minutes later, Alberta netted their first of the weekend when former Victoria Royal Brandon Magee evened the score with his second of the playoffs.

With the game deadlocked heading into the second frame, the Huskies – who finished just one point up on Alberta in the regular season – got a flurry of offence to regain the lead.

A power play goal from Alberta’s Jayden Hart in the dying moments of the second looked like it might spark a possible Golden Bears comeback, but 2019 CW Goalie of the Year Taran Kozun had other ideas.

The former Seattle Thunderbird stopped all 11 shots Alberta fired his way in the third, as Saskatchewan’s Carter Folk added an insurance marker with just under five minutes to play to cap off the night’s scoring.

The win lifts Saskatchewan to within a game of returning to the top of Canada West, after the Huskies suffered back-to-back losses to Alberta in the CW Final the last two seasons.

Game 2 of the series goes Saturday night at 7 p.m. CST, and is available exclusively on Canada West TV.