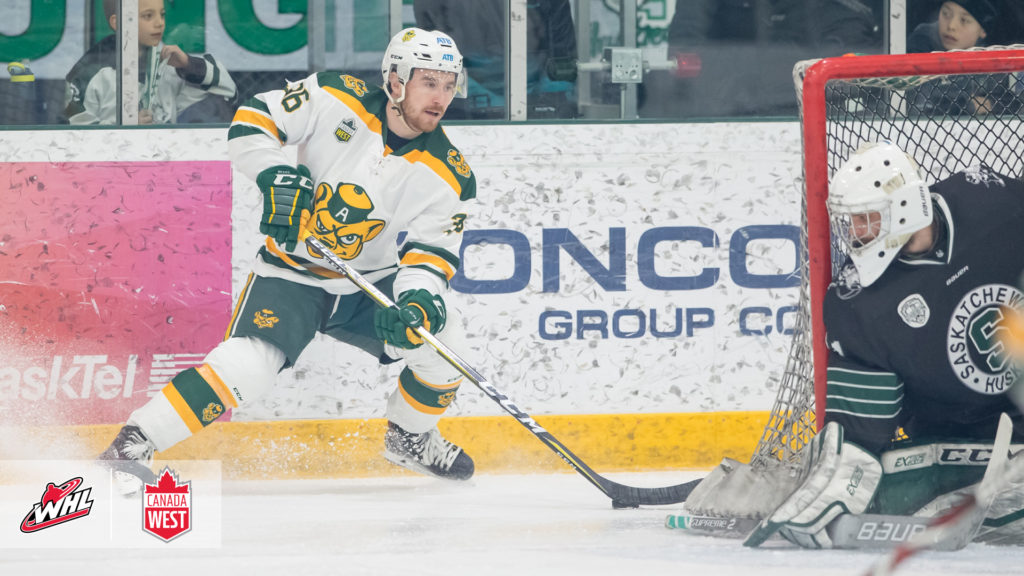 SASKATOON – The Alberta Golden Bears will live to see another day, as they defeated the Saskatchewan Huskies 3-0 Saturday in Game 2 of the Canada West Men’s Hockey Final at Merlis Belsher Place.

With the win, Alberta forces a third and deciding game in the best-of-three series, which will go Sunday at 7 p.m. CST. The Golden Bears win came on the heels of Saskatchewan’s 4-2 win in Game 1 of the series Friday night.

Alberta controlled the play all night Saturday, as the defending conference and University Cup champions were unfazed in enemy territory despite a full house of 2,643 fans at Merlis Belsher Place.

“This has been how we have played so far this season. We have done a good job at bouncing back after bad losses,” said Golden Bears head coach Ian Herbers. “Yesterday we looked slow, played a lot of the game on the perimeter. Tonight was much better, we dictated play, we wanted the puck and to be in those hard areas. And when we play our game, we are very difficult to play against.”

With both programs University Cup bound in two-weeks time, Game 3 tomorrow night will serve as a pre-cursor to do-or-die national championship games.

Riley Kieser had a goal and an assist and Cole Sanford tacked on a pair of helpers for the Golden Bears, while Grayson Pawlenchuk’s third-period snipe ensured Alberta took the victory.

“Our effort and intensity was where it needed to be tonight,” said Kieser. “We were slow yesterday, didn’t play our game, and let the Huskies come to us. Tonight we dictated the play more, and generated more chances. Our effort was much better, and we played Golden Bears Hockey.”

Zach Sawchenko bounced back after allowing four goals on Friday night with a 21-save shutout to help guide Alberta to the win.

The Huskies had the first clear scoring chance just under three minutes into the opening frame when they broke up the ice on a three-on-one. Alex Forsberg slid the puck over to his brother Jesse who went back-to Alex, but the second-year forward sent his shot wide.

After the Golden Bears found themselves with two men in the penalty box, the Huskies went to work on a 45-second five-on-three. However, unlike in Game 1, when the Huskies were able to take advantage on the power play, Saskatchewan was unable to capitalize on the opportunity thanks to a strong kill from Alberta.

With 3:25 remaining in the frame, Alberta was rewarded for their defensive work with a tremendous chance, as Philp fed the puck across to Taylor Cooper on the odd-man rush, but Saskatchewan netminder Taran Kozun was able to keep the game locked up at zeroes.

After coming out slow out of the gate in game one and allowing a goal just three minutes into the contest, Alberta responded with an improved start on Saturday night. The visitors outshot Saskatchewan 9-5 in the opening period of play.

Alberta continued that strong start when they broke the ice just 19 seconds into the middle frame as Kieser wired home a wrister over the blocker of Kozun to get the visitors on the board.

After Luke Philp committed the sixth Golden Bears minor penalty of the night, Saskatchewan went back to the power play. On the man advantage, Wyatt Johnson worked the puck over to the weak side and found Alex Forsberg whose one-timer off one knee rocketed off the crossbar.

Bouyed by yet another strong showing shorthanded, the Golden Bears extended their lead to two when Kieser slid the puck into the slot for an unmarked Cox, who shelfed his first goal of the postseason.

“We made a critical mistake on their second goal, and that was the difference in the game,” said Huskies head coach Dave Adolph.

The Golden Bears continued to control play in the second period and outshot the Huskies 14-7 in the frame.

Alberta took a three-goal lead midway through the final period, when Pawlenchuk, the Canada West Rookie of the Year, walked in on Kozun and went short-side over the right shoulder of the second-year netminder to pick the corner, icing the game for the visitors.

Alberta outshot Saskatchewan 30-20 on the night.

The @BearsandPandas score a 3-0 win over @HuskieAthletics in Game 2 of the CW Final. Get set for Game 3️⃣ tomorrow night at 7 p.m. CST!