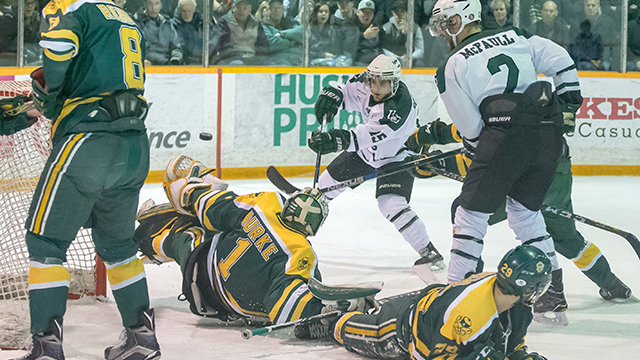 SASKATOON – Meeting for a record 19th time in the Canada West Men’s Hockey Final, Game 1 between the Alberta Golden Bears and Saskatchewan Huskies Friday night showed yet again why the bitter rivals are the class of the conference.

In a physical, back and forth affair fitting of the storied rivals, Graeme Craig’s first of the playoffs 8:36 into the third period proved to be the game-winner, as Alberta skated away with a 4-3 series opening win inside a packed Rutherford Rink.

Alberta’s win was their first of the season in Saskatoon after being swept in December by the defending Canada West champion Huskies, who outscored the Bears a combined 14-6 during the regular season, and went 3-1 against their longtime rival.

Friday was also a measure of playoff revenge for the Bears after being swept a year ago at Rutherford, when Saskatchewan skated away with their 16th conference title.

“I’ll take this as a snapshot of the season and allow myself to look at how much this team has grown,” said Bears head coach Serge Lajoie. “They’ve gained some experience along the way and I think that we like playing against Saskatchewan. For us, they’re a good measuring stick of where we’re at and I thought it was a good performance.”

Coming off a semifinal sweep of the Calgary Dinos, Alberta opened the series by peppering Saskatchewan netminder and former Kelowna Rocket Jordon Cooke with 10 consecutive shots.

After dominating the opening half of the first period, Alberta finally beat Cooke when former teammate Cole Linaker’s opened the scoring at the 10:44 mark of the first.

“We did want to come out strong against them. All of our players – and our coaching staff as well – have a lot of respect for how they play the game, especially in their old barn, so I was happy with our start, but after that the game really evened out,” said Lajoie.

Linaker, who played with Cooke in Kelowna during their Western Hockey League careers, beat the conference’s top netminder with a beautiful finish through the five-hole to give Alberta the early lead.

That goal, however, did more to spark Saskatchewan than it did Alberta, as the Huskies turned up the heat after falling behind.

Saskatchewan equalized with less than four minutes to play in the first, as Connor Gay scored his first of the playoffs.

Deadlocked at one heading into the middle frame, Alberta and Saskatchewan would once again trade goals – this time in rapid succession.

Taylor Cooper gave the Bears their second lead of the night on a shot from the high slot at the 7:21 point of the second. That lead, however, evapourated just 38 seconds later.

Deadlocked heading into the final frame, Alberta took the lead yet again, as Cooper made the most of a loose puck that had slipped off Linaker’s stick, burying a shot past a helpless Cooke just 2:13 into the frame.

After failing to stretch their lead to two in the first 40 minutes, this time Alberta was able to build their cushion when Craig managed to rifle a shot from the point through traffic and into the net at the 8:36 mark. Drawing an assist on Craig’s eventual game-winner was Linaker, who finished the night with a goal and four assists, as the ex-Rocket led the offensive charge.

Saskatchewan, who was pushed both games last weekend in their semifinal sweep of Mount Royal, didn’t go quietly into the night. Wyatt Johnson’s first of the playoffs and seventh of the season pushed the score to 4-3 with less than six minutes to play.

But despite a late push, the Huskies couldn’t fight back to equalize for a third time, as Alberta skated away with just their third win in 11 Canada West Final games all-time at Rutherford Rink. The loss was also just the fourth all-time for the Huskies at home in the conference final, as they are now 12-4 in Canada West Final games at Rutherford.

“Right off the get go we were slow and they were able to get the first one. That was a big point. We were able to get it back, but at the end of the day, when you’re trailing basically the whole game, it’s tough to come back,” said Gay.

Alberta takes aim at their record 53rd conference title Saturday night, while the Huskies look to push the best-of-three series to the limit when the puck drops on Game 2 at 7 p.m. CT.

The game can be seen live on CanadaWest.tv.