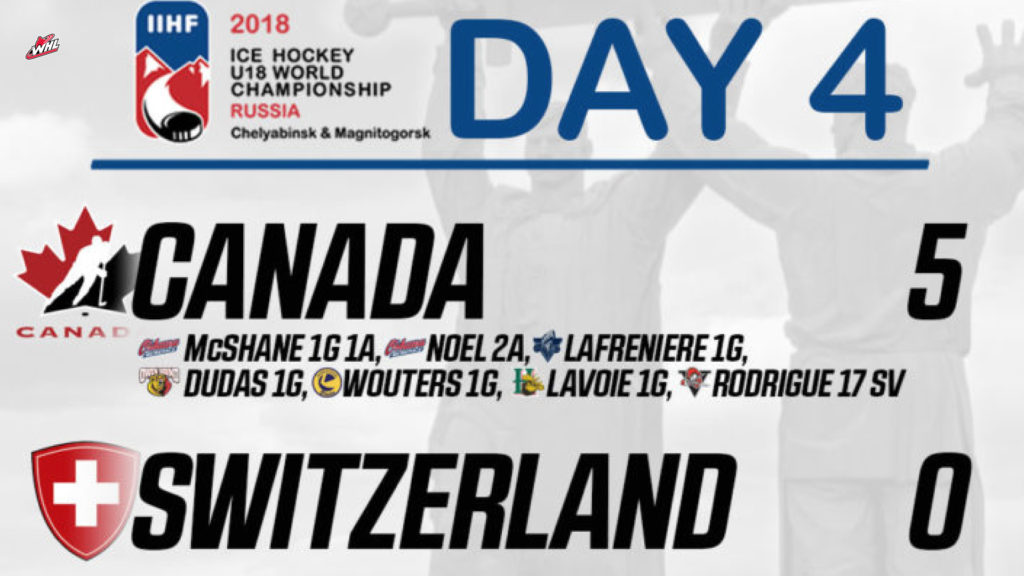 Olivier Rodrigue (Drummondville Voltigeurs) was perfect in his 2018 IIHF U18 World Championship debut, turning aside all 17 shots he faced as Canada blanked Switzerland 5-0 t0 improve to 3-0.

“We really stuck with it,” said Canada head coach Don Hay (Kamloops Blazers) following the win. “It’s a hard game to play when you have the puck as much as we did. We didn’t get frustrated [when we weren’t scoring]; we found a way to get a short-handed goal, we scored on the power play. It’s important that you have everyone at the top of their game. I thought we did a lot of good things, and we didn’t do anything to shoot ourselves in the foot.”

McShane finished the game with a goal and an assist while Oshawa Generals teammate Serron Noel chipped in with two helpers.

Canada remains perfect through three preliminary games while Switzerland falls to 0-3. Canada completes the round robin on Tuesday against undefeated Sweden.

OTHER WU18 SCORES FROM SUNDAY:

For full coverage of the 2018 IIHF World Under-18 Hockey Championship, visit IIHF.com.