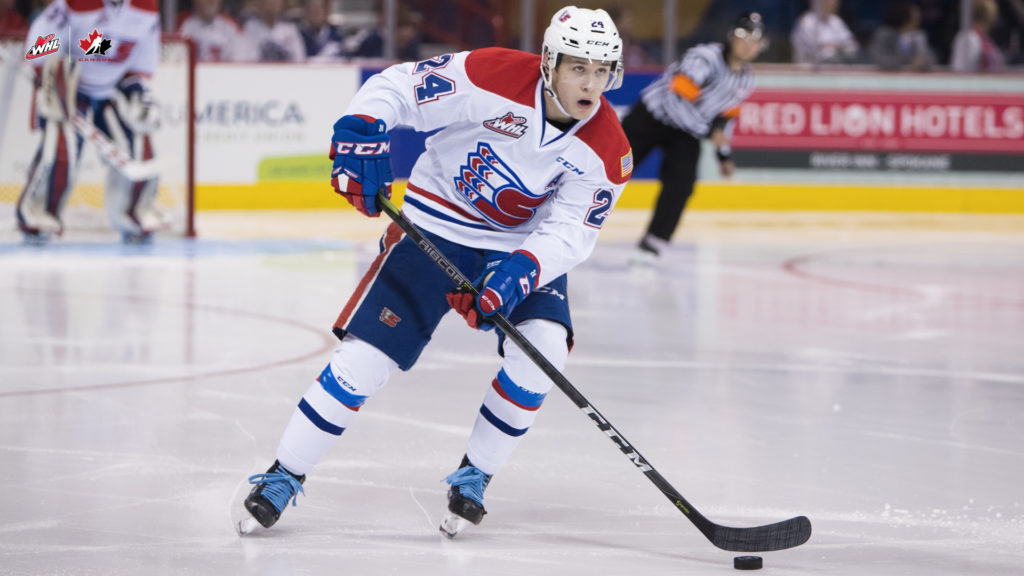 Canada remained perfect at the 2018 IIHF U18 World Championship Friday in Russia.

A five-goal first period paced the red and white to their second victory in as many days, providing a strong followup to their 6-4 win over the United States Thursday.

A trio of WHL players found their name on the score sheet in the contest as defencemen Bowen Byram (Vancouver Giants) and Matthew Robertson (Edmonton Oil Kings) each earned an assist for their first point of the tournament. Forward Chase Wouters (Saskatoon Blades) also picked up an assist in the contest.

“We want to be a four-line hockey club, we want everybody to contribute and everybody to feel [they’re of] value to our group,” said head coach Don Hay. “I think we’re doing that. I thought we had a great start. [The play was] going back-and-forth for a little while, then we were able to establish ourselves and our presence in front of the net. Everybody has a real good spirit within our group, and we’re growing – and I like that the best.

“We did a lot of good things, and we’re looking forward to getting a day off and then moving on [to play Switzerland on Sunday].”

Robertson was a plus-four in the game while Byram added a shot and a plus-one rating. Captain Ty Smith (Spokane Chiefs) had three shots and plus-two rating.

After scoring five times in the first, Canada had a single goal in the second and a pair in the third. They’ve now outscored their opponents 14-7 in their first two games.

“I think we’re doing pretty well,” said Smith. “We had a couple pre-tournament games to help us get adjusted, and then started the tournament off pretty well on the big ice. Lots of the guys like it – we have some skilled players [who] like to play on the big ice [because] it gives them a bit more room.”

Serron Noel and Jack McBain played major roles in the victory, with each recording a three-point game.

In other action at the tournament, Gilian Kohler scored for Switzerland in their 8-5 loss to the United States.

Canada is back in action Sunday when they take on Switzerland.