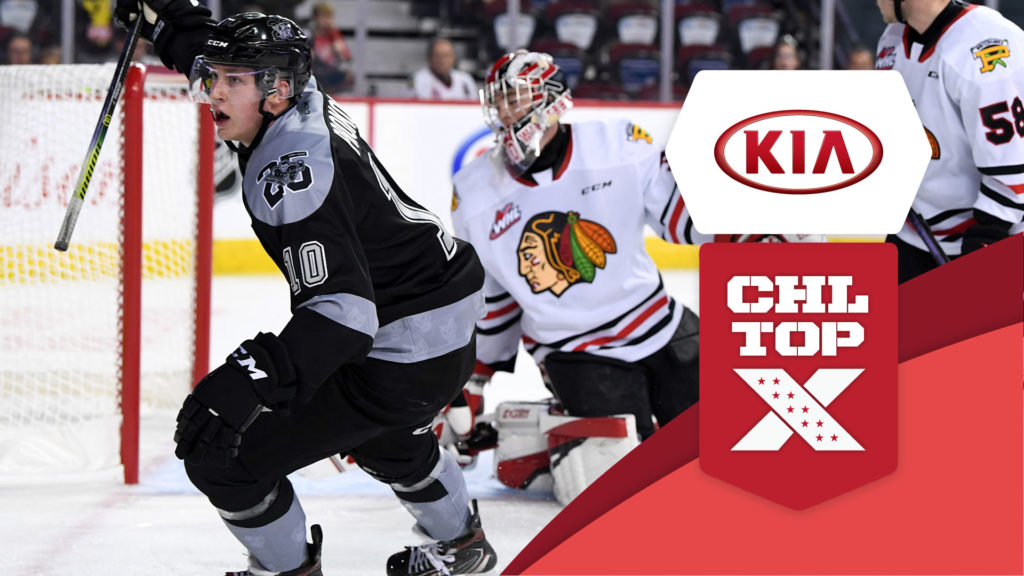 Toronto, Ont. – The Canadian Hockey League today announced the week four edition of the Kia CHL Top-10 Rankings for the 2019-20 season. The weekly rankings of the CHL’s Top-10 teams are selected by a panel of National Hockey League scouts.

After extending their record to 4-0-1-0, the fifth-place Calgary Hitmen are the top-ranked team from the Western Hockey League this week. The Hitmen downed the Portland Winterhawks by a 5-2 score Sunday for their fourth-straight victory in their lone game of the weekend. Vancouver Canucks prospect Carson Focht and Philadelphia Flyers prospect Egor Zamula are presently tied for the team lead in scoring with seven points (3G-4A) each. Up next for the Hitmen is a match against the Edmonton Oil Kings at Rogers Place on Saturday, October 12 (7:00 p.m. MT).

Right behind the Hitmen in sixth place are the defending WHL Champion Prince Albert Raiders, who have yet to lose in regulation following a 5-0-2-0 start. After dropping a 2-1 overtime contest to the Saskatoon Blades, the Raiders rebounded with a 6-0 shutout of the Regina Pats and a 4-2 win over the Vancouver Giants in a rematch of the 2019 Rogers WHL Championship Series. In addition to their spot in the Kia CHL Top 10 Rankings, the Raiders are also garnering strong attention ahead of the 2020 NHL Draft, with four skaters recently recognized by NHL Central Scouting. They’re led by ‘A’-rated prospect Kaiden Guhle, who is tied for fourth in WHL defensive scoring with six points (2G-4A) in seven games. The Raiders welcome the Lethbridge Hurricanes to the Art Hauser Centre on Friday, October 11 (7:00 p.m. MT).

Rising one spot to eighth in this week’s Kia CHL Top 10 Rankings were the Edmonton Oil Kings, who lead the Central Division with a 5-1-2-0 record. Following an overtime loss last Wednesday, the Oil Kings responded with a 7-0 win over the Winnipeg ICE, 2-1 win against the Brandon Wheat Kings, and a 5-3 topping of the Regina Pats. Tied for the league lead with 30 goals for, the Oil Kings are buzzing offensively thanks to the likes of Riley Sawchuk and Josh Williams. The pair lead the team with nine points (3G-6A) each through eight games. Closing out a five-game road trip, the Oil Kings will take on the Moose Jaw Warriors at Mosaic Place on Wednesday, October 9 (7:00 p.m. MT).

Earning an honourable mention this week are the Moose Jaw Warriors. Sunday’s 3-0 shutout of the Regina Pats was their lone game of the week, pushing their winning streak to four games and placing them second in the East Division. Acquired in the offseason, Ryder Korczak has quickly become an offensive leader for the Warriors, posting 10 points (2G-8A) in five games to rank in a tie for third in league scoring. The Warriors host the Oil Kings at Mosaic Place on Wednesday, October 9 (7:00 p.m. MT).