Calgary Hitmen ready to suit up to promote organ donation 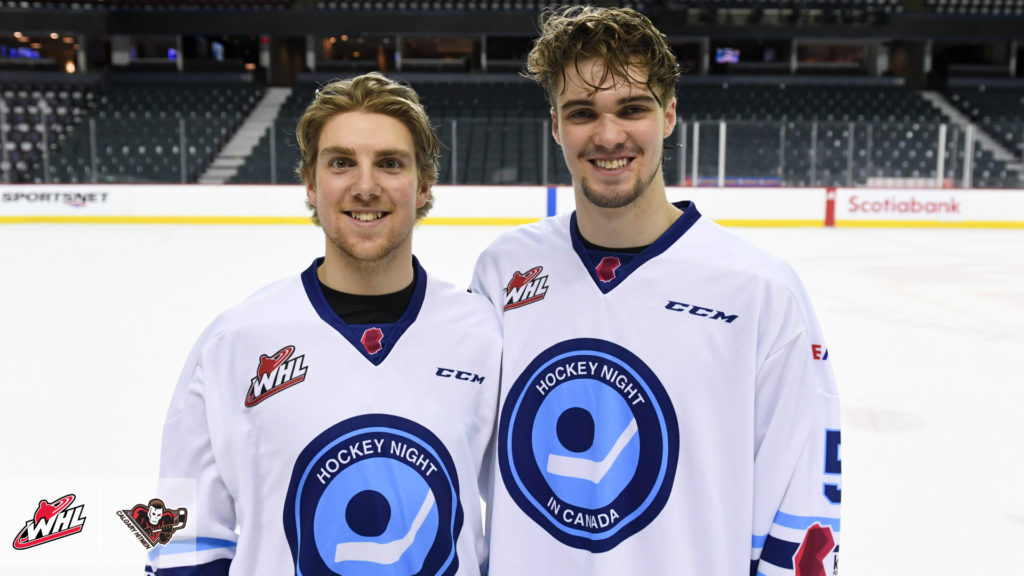 The Calgary Hitmen Hockey Club will wear specially-designed Hockey Night in Canada jerseys on Sunday, Mar. 15 at 2:00 p.m. (MT), when they host the Red Deer Rebels at the Saddledome. It’s all part of WHL Suits Up to Promote Organ Donation, presented by RE/MAX, which sees all 17 Canadian Western Hockey League markets host this awareness game.

The limited edition jerseys will only be worn Sunday and feature the retro Hockey Night in Canada logo with a blue and white design. To remind fans to consider filling out their organ donor card, every jersey collar is branded with “The Logan Boulet Effect”. Each sleeve is adorned with the Kidney Foundation of Canada logo while a RE/MAX shoulder patch and a Hitmen 25th Anniversary shoulder patch complete the one-of-a-kind look.

“The Calgary Hitmen are proud to support the work of the Kidney Foundation, the Boulet family, and RE/MAX by hosting a game dedicated to spreading the word about the importance of organ donation,” said Rob Kerr, Hitmen Assistant Manager of Business Operations. “While we are able to pay homage to a Canadian institution by wearing Hockey Night in Canada inspired uniforms, the important part of this event is moving forward the conversation and building awareness for organ donation.”

“We are grateful to the WHL and RE/MAX for partnering with us again, for the third year, on this important initiative,” said Joyce Van Deurzen of the Kidney Foundation of Canada (SAB). “Each year more than 250 Canadians die because the wait is too long. Our goal is that everyone who needs a transplant will get one. This is an important opportunity to put organ donation in the spotlight and save lives.”

When doors open at 1:00 p.m. the first 7,500 fans will receive a scratch card with 2,000 winners to receive a special edition Hockey Night in Canada bobblehead. RE/MAX will have a booth behind section 227 where fans can enter a raffle to win an autographed Hockey Night in Canada jersey. With every $5 donation made to the Kidney Foundation booth located behind section 228, fans will receive a free giveaway. Items include mini sticks or a Logan Boulet wristband and hockey card.

Fans will be able to bid on the unique uniforms at ElevateAuctions.com/HockeyNightInCanada. The online auction opens game time Sunday and will close on Sunday, Mar. 22 at 8:00 p.m., with the net proceeds going to the local chapter of the Kidney Foundation.

More than 4,300 Canadians are currently awaiting an organ donation – 78 percent whom require a kidney. Ryan McLennan, who spent several years on dialysis, sent out a public plea and eventually received a kidney transplant from living donor Tony Timmons. The two complete strangers, who have now become close friends, will participate in Sunday’s ceremonial puck drop.