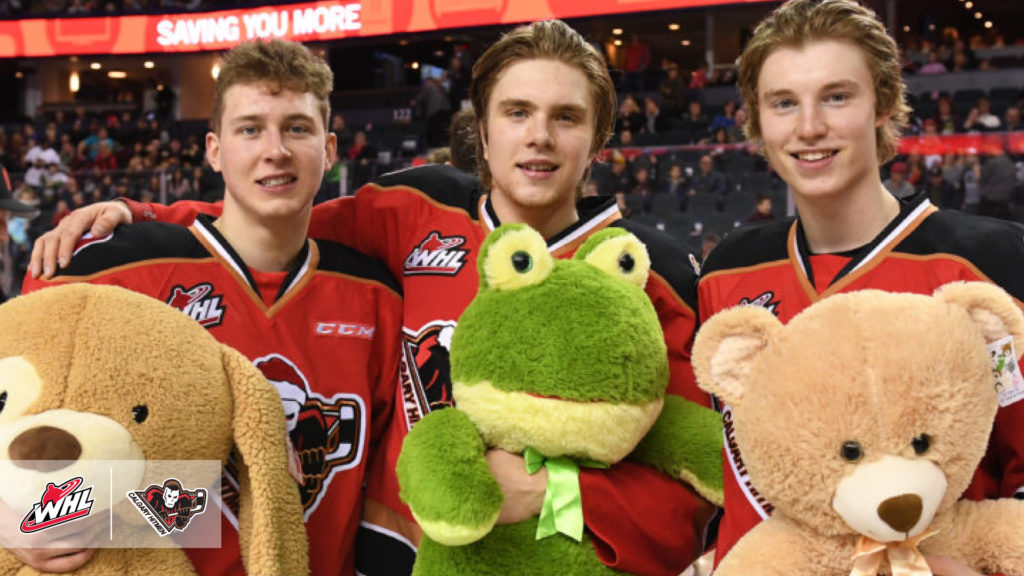 The Calgary Hitmen Hockey Club today announced, that due to overwhelming demand, they have opened press-level seating for the ENMAX Teddy Bear Toss set for Sunday, December 1 (4:00 p.m. MT) against the Red Deer Rebels.

General admission tickets in the third level are available for only $9.99 for kids 12 and under and $14.99 for adults (plus applicable fees and taxes). They can be purchased at Ticketmaster, the Scotiabank Saddledome box office or by phone at 1-855-985-5000.

This year marks the 25th anniversary of the toss in Calgary with the goal of taking back the world record for most bears tossed in a single game.  The AHL’s Hershey Bears set a new mark last season of 34,798.

“Our fans have supported this terrific cause since day one and have told us they want the record back,” said Hitmen Assistant Manager of Business Operations Rob Kerr.  “A full building that sees everyone bring two stuffed animals to toss on the ice after our first goal would break the record.  It would also accomplish the greater goal of helping more than 60 local agencies this holiday season including the Alberta Children’s Hospital and Salvation Army.”

The upcoming holiday season currently sees demand for over 25,000 new or gently used teddy bears.  However that list continues to grow with all interested charities encouraged to contact info@hitmenhockey.com to request their number of bears.

Since the inaugural toss on Dec. 16, 1995, the Hitmen, with the support of their partners and fans, have collected 377,583 stuffed toys for Calgary and area community groups.

Due to overwhelming demand, press-level seating is now open for the @ENMAX Teddy Bear Toss on Sunday, Dec. 1!