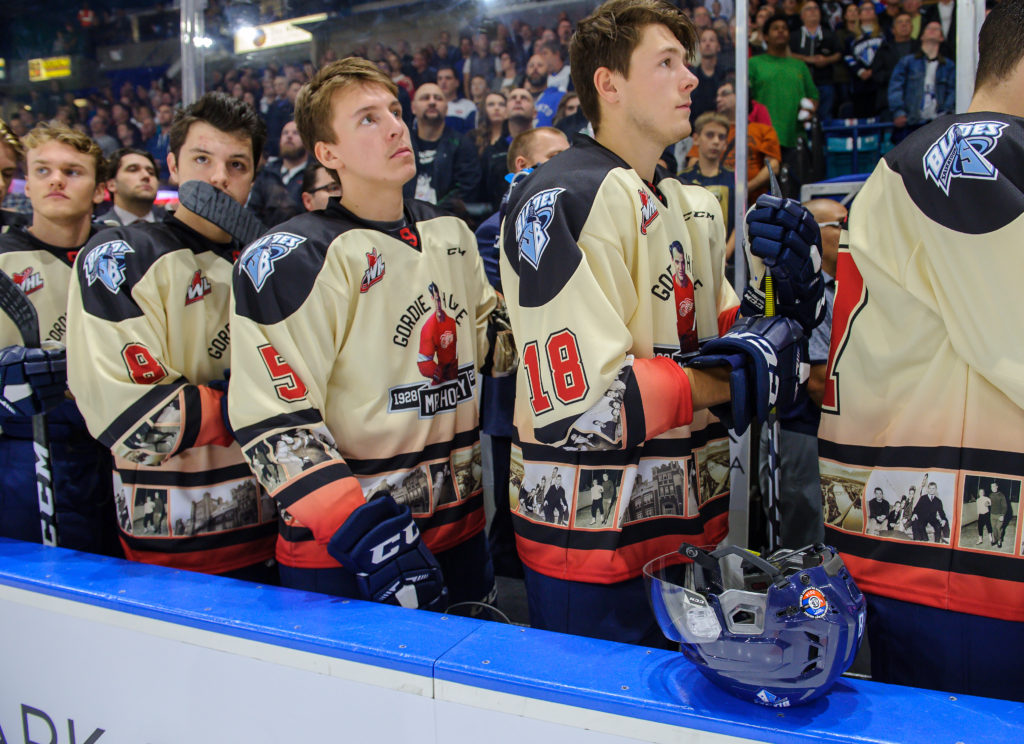 A busy opening weekend in the Western Hockey League came to a close with a pair of matinee games Sunday afternoon.

First, the Saskatoon Blades hosted the Swift Current Broncos and “Thank You, Mr. Hockey Day” at Sasktel Centre. From there, the proceedings skipped south of the border as the Tri-City Americans visited the Portland Winterhawks.

The Blades celebrated the life of hometown legend Gordie Howe, but from there, the Broncos were the only ones celebrating as they skated to a 6-0 victory. Finnish phenom Aleksi Heponiemi paced his squad, collecting four assists along the way. Right winger Calvin Spencer chipped in with two goals and an assist, while goaltender Travis Child made 28 saves for the shutout.

South of the border, the Portland Winterhawks scored a touchdown for the second consecutive outing, knocking off the Tri-City Americans by a score of 7-3.

The day began with a rousing tribute to Saskatoon product Gordie Howe, whose ashes – along with the ashes of his wife Colleen – were interred in the Mr. Hockey statue in front of Sasktel Centre.

An emotional ceremony was hosted by one of Canada’s most famous hockey voices – Bob Cole – with members of the Howe family in attendance, along with NHL great Bryan Trottier and a host of others.

A memorial banner was unveiled in the rafters of Sasktel Centre before the Blades took to the ice wearing Mr. Hockey-inspired sweaters, which would later be auctioned off in support of the Gordie Howe Alzheimer’s Fund.

After the puck was dropped, the Broncos took over the show.

Noah King (1) opened the scoring with a first period power-play effort off a fantastic one-touch feed from Heponiemi before Brandan Arnold (1) made it 2-0 prior to the first intermission.

Calvin Spencer (1) clicked for the only goal in the second period as the Broncos took a 3-0 advantage to the dressing room after 40 minutes.

The Broncos put the game out of reach within the first five minutes of the third period as Tyler Steenbergen (2) and Tyler Adams (1) scored to make it a 5-0 game. Spencer (2) added his second of the night with a power-play tally moments later.

Between the pipes, Travis Child made 28 saves to earn the shutout in his first appearance of the season. Brock Hamm earned the start for the hosts, surrendering six goals on 31 shots.

Skyler McKenzie scored twice, while five other Winterhawks registered multi-point performances as Portland shut down the Tri-City Americans by a 7-3 margin Sunday evening.

Henri Jokiharju (1), Keoni Texeira (2) and McKenzie (2) all scored during the first period as the Winterhawks took a commanding 3-0 lead through 20 minutes of play.

The Americans fought back in the second with goals from Michael Rasmussen (5) and Kyle Olson (1) but Brendan De Jong (2) notched another for the hosts, giving Portland a 4-2 lead after 40 minutes.

McKenzie (3) tallied his second of the night only 3:28 into the final period before Tyler Sandhu (1) scored to keep the Americans within two. Ryan Hughes (2) made it 6-3 before Evan Weinger (1) scored into an empty net to round out the night.

The Americans were 1-for-3 with the man advantage, while the Winterhawks went 1-for-2.

Dalton Yorke (2A), Juuso Valimaki (2A) and Sandhu (1G, 1A) registered multipoint efforts for the Americans.

In net, Cole Kehler made 26 saves on 29 shots to claim the win for Portland, while Beck Warm surrendered six goals on 36 shots in a losing cause for Tri-City.

Next up in the WHL