Broncos’ Steenbergen named WHL On the Run Player of the Week 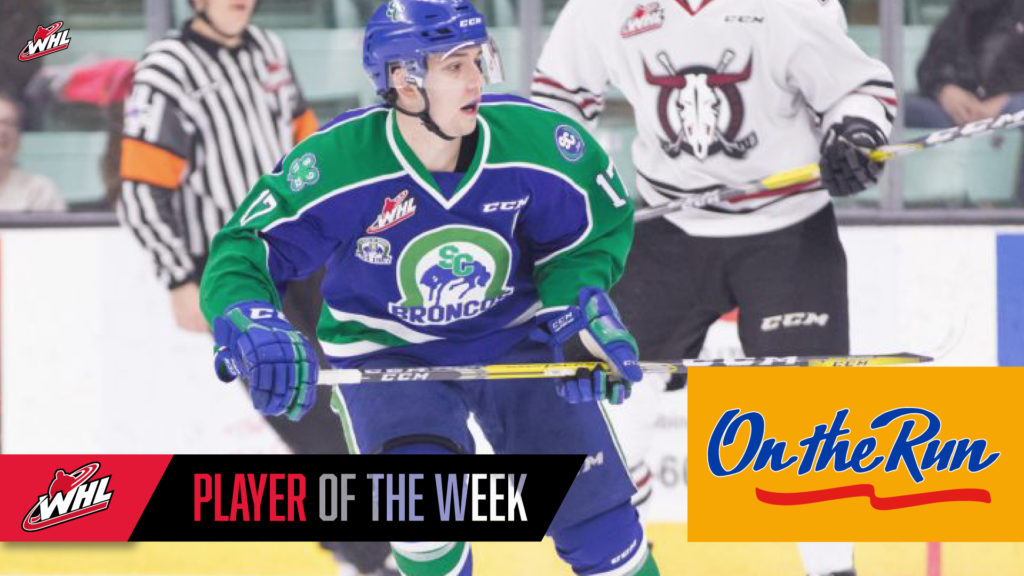 Calgary, Alta. – The Western Hockey League announced today that Swift Current Broncos center Tyler Steenbergen has been named the WHL On the Run Player of the Week for the week ending October 22, 2017.

Steenbergen, who was selected in the fifth round (128th) of the 2017 NHL Draft by the Arizona Coyotes, continues to shred the WHL and CHL scoring charts this season, earning his second WHL On the Run Player of the Week recognition. In only two games this week, the product of Sylvan Lake, Alta., stacked up another five goals and eight points, including his third four-goal game of the year in a 6-4 road win over the Lethbridge Hurricanes on October 20. The 5-foot-10 pivot closed his weekend with another three points (1G-2A) on October 21 in a 5-4 overtime road loss to the Kootenay ICE.

Collecting three of a possible four points in two games, Steenbergen and the Broncos maintained a share of the tightly-contested East Division lead with 19 points. That total is also good enough to put the Broncos in a share for the WHL’s overall standings lead as well.

Steenbergen’s five-point performance in Lethbridge earned him recognition as the WHL’s first star of the night for October 20. The sharpshooter has now scored four goals in a game on three separate occasions this season, including September 30 in a 7-2 win at Brandon and October 6 in a 6-2 win at Saskatoon.

He was previously named WHL On the Run Player of the Week for the week ending October 1.

With 33 points to his name, Steenbergen leads the entire Canadian Hockey League in overall scoring. His 21 goals also put him atop the CHL ranks. His hot start to the campaign has earned him

Steenbergen and the Broncos return to action Friday, October 27 (7 p.m. MT) when they host the Saskatoon Blades.

WHL On the Run Player of the Week