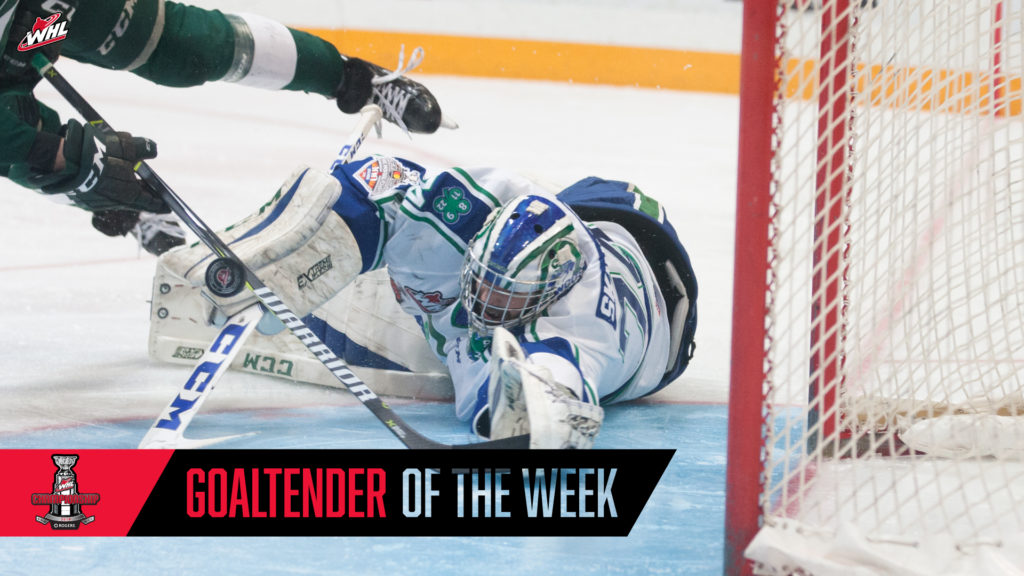 Skinner, who was selected by the Edmonton Oilers in the third round, 78th overall, of the 2017 NHL Draft, maintained a 2-1-0-0 record, 1.93 goals-against-average and stopped 96 of 102 shots directed his way for a .941 save percentage as the Broncos captured the Eastern Conference Championship and advanced to the 2018 Rogers WHL Championship Series for the first time since 1993.

Monday’s 5-1 win against the Lethbridge Hurricanes helped to clinch that Eastern Conference Championship, with Skinner stopping 33 of 34 shots in the win. The first and only visiting goaltender to win in Lethbridge during the 2018 WHL Playoffs, Skinner was named the third star of the night in the WHL for his efforts.

Friday night in Game One of the WHL Championship against the Everett Silvertips, Skinner was sharp once again, making 23 saves on 25 shots, but was edged in a tight 2-1 goaltending duel. Skinner and the Broncos would rebound in Game Two however, with Skinner stopping 40 of 43 shots in a 4-3 overtime victory against the Silvertips. Overall, teams went 1-for-10 on the power play against Skinner throughout the week.
The 6-foot-4, 200-pound product of Edmonton, Alta. has now played in 22 games during the 2018 WHL Playoffs, sporting a 13-9 record with two overtime losses, 2.33 GAA, .927 SV% and four shutouts. Skinner first among WHL goaltenders for GAA, SV%, and shutouts, while also remaining tied for first in wins throughout the 2018 WHL Playoffs. Overall, Skinner has appeared in 46 career WHL Playoffs games, maintaining a 24-22 record with five overtime losses, 2.76 GAA, .918 SV% and four shutouts.

Originally selected in first round, 17th overall, by the Hurricanes in the 2013 WHL Bantam Draft, Skinner has appeared in 207 WHL regular season games, maintaining a 104-72-9-6 record, 3.22 GAA, .908 SV% and 12 shutouts. This week’s honour marks the fifth time Skinner has won the award since a mid-season trade brought him to Swift Current.

With the 2018 Rogers WHL Championship Series tied 1-1, the series has now shifted to Everett, Wash. for the next three contests, beginning with Game Three at Angel of the Winds Arena on Tuesday, May 8, 2018 (7:05 p.m. PST).