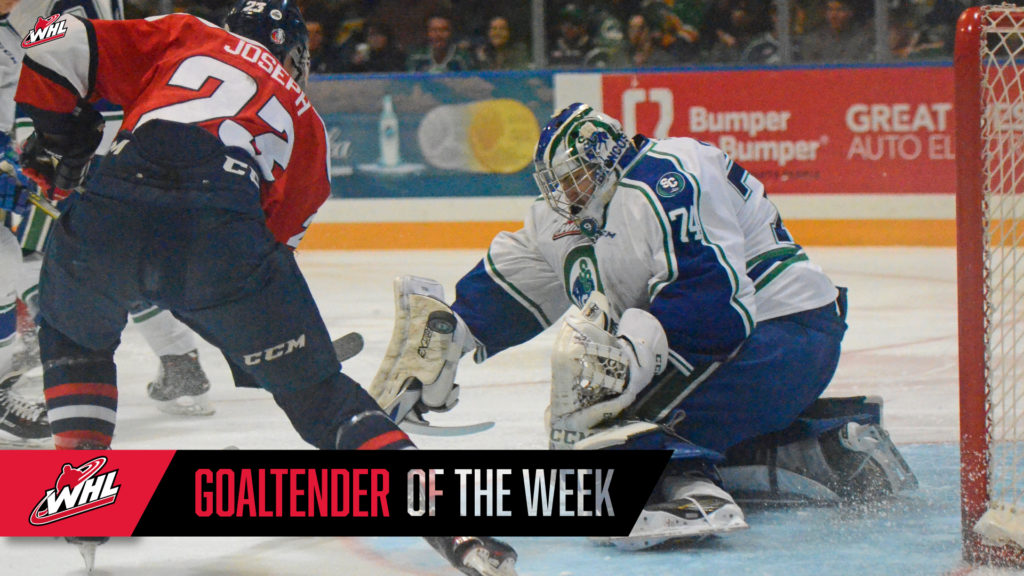 Skinner, who was selected by the Edmonton Oilers in the third round, 78th overall, of the 2017 NHL Draft, maintained a perfect 3-0-0-0 record, 1.58 goals-against-average, stopped 100 of 105 shots for a .952 save percentage and one shutout as the Broncos advanced to the Eastern Conference Championship for the first time since 2001 and moved up 2-0 in the series against the Lethbridge Hurricanes.

Monday, Skinner began his week in style with a 25-save shutout of the Moose Jaw Warriors to close out their Round Two series. Skinner’s fourth shutout of the 2018 WHL Playoffs included nine saves in the first, nine in the second, and seven in the third. Skinner earned third star honours for the evening due to his efforts. It marked his third straight shutout at Mosaic Place during the series, stopping 101 of 105 shots on the road during the series.

Skinner’s week concluded with a 36-save performance in a 4-3 overtime victory against the Hurricanes. The Broncos trailed for the first time in the series at the conclusion of the second period, but Skinner responded by stopping all 18 shots in the third period and overtime combined, allowing the Broncos to score the tying goal in the third and win the game in overtime.

The 6-foot-4, 200-pound product of Edmonton, Alta. has now played in 16 games during the 2018 WHL Playoffs, sporting a 10-6 record with two overtime losses, 2.10 GAA, .935 SV% and four shutouts. Skinner is tied for first among WHL goaltenders for GAA, second in SV%, and ranks first in victories and shutouts throughout the 2018 WHL Playoffs. Overall, Skinner has appeared in 40 career WHL Playoffs games, maintaining a 21-19 record with five overtime losses, 2.74 GAA, .920 SV% and four shutouts.

Originally selected in first round, 17th overall, by the Hurricanes in the 2013 WHL Bantam Draft, Skinner has appeared in 207 WHL regular season games during his career, recording a 104-72-9-6 record, 3.22 GAA, .908 SV% and 12 shutouts. This week’s honour marks the fourth time Skinner has won the award since a mid-season trade brought him to Swift Current.

Skinner and the Broncos will be looking to take a 3-0 series advantage against the Hurricanes Tuesday, April 24 (7:00 p.m. MT) when the Eastern Conference Championship shifts to the Enmax Centre in Lethbridge, Alta. for Game Three of the best-of-seven series.