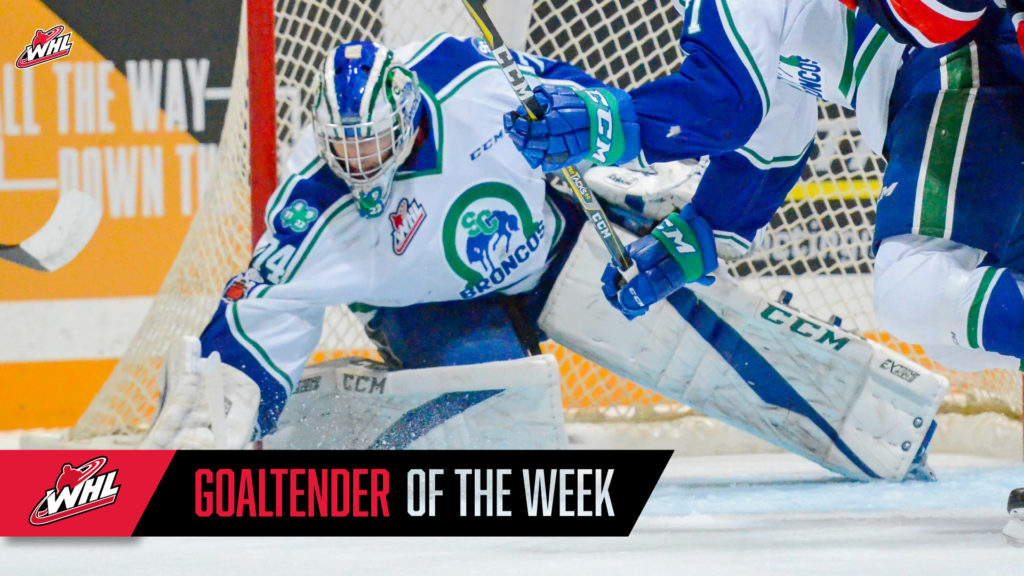 Skinner, selected by the Edmonton Oilers in the third round, 78th overall, of the 2017 NHL Draft, earned a win and a loss while maintaining a 1.01 goals-against-average, .970 save percentage, and one shutout in the first two games of the Broncos’ first round series against the 2018 Mastercard Memorial Cup host Regina Pats.

Friday, Skinner stopped all 34 shots sent his way in a 3-0 shutout of the Pats, giving the Broncos a 1-0 advantage in the series. Skinner made 14 saves in the first, eight in the second, and 12 in the third for his first career WHL Playoffs shutout. The Pats went scoreless on four power-play opportunities throughout the game as the Broncos took the lead 3:43 into the first period and never looked back. Skinner’s efforts Friday earned him first star honours in the game as well as first star honours for the night across the WHL.

Saturday, Skinner stopped 30 of 32 shots directed his way in a tight 2-1 loss to the Pats to even up the series. The Pats were successful on one of their five power-play opportunities throughout the contest. Skinner kept the Broncos in the game, stopping 19 of 20 shots through two periods to keep the deficit at just a single goal for the majority of the contest.

Skinner has now appeared in 26 career WHL Playoff games, maintaining a 12-11-3-0 record, 3.01 GAA, and .915 SV% with one shutout. Through the first weekend of action in the 2018 WHL Playoffs, Skinner leads all goaltenders in GAA, SV%, is tied for the league-lead in shutouts while also sitting in a tie for third with one victory.

Skinner and the Broncos will be looking to gain the advantage in their series Monday, March 26 (7:00 p.m. MT) when the series heads to the Brandt Centre for game three of the best-of-seven series.